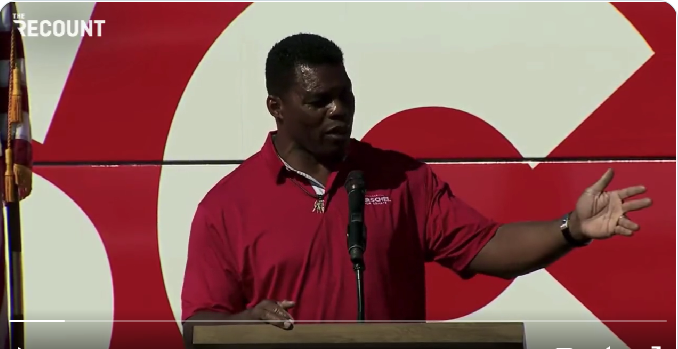 This is just pure instinct and if I’m wrong I’m wrong, but I think Herschel Russian Roulette Walker just did himself in. I honestly believe it’s all over now. Politically he just did the equivalent of shooting himself in the head by dissing Barack Obama (as he’s been doing for a week now) and invoking the birther conspiracy.

Obama won over 45% of the Georgia vote in 2012. It wasn’t some blow out for Mitt Romney. So for Herschel Walker to assume that all Democrats are universally loathed or some such is insane.

Plus, it goes without saying, the proportion of the Black vote that Obama garnered was huge and this is the same vote that Walker is trying to get.

Herschel Walker (R): “Why don’t [Obama] go back to wherever he’s from?" pic.twitter.com/Ffjw9kzEzi

Why don’t you go back to Texas, where you were living before you decided to do a Dr. Oz carpetbagger maneuver and get into Georgia politics?

I think this may have done it. Again, just instinct. With his anti-Obama dirge he’s making an anti-Black progress statement, at least that is the way that I hear it and I can’t imagine that too many other people are hearing it differently. Especially Black people.

We’ll see. For so many reasons I hope that Raphael Warnock flames this guy into a marshmallow.

I’m sure even Newt Gingrich would find this a bad move and he’s Mr. Georgia himself. Or, who knows? Maybe Newt advised it?