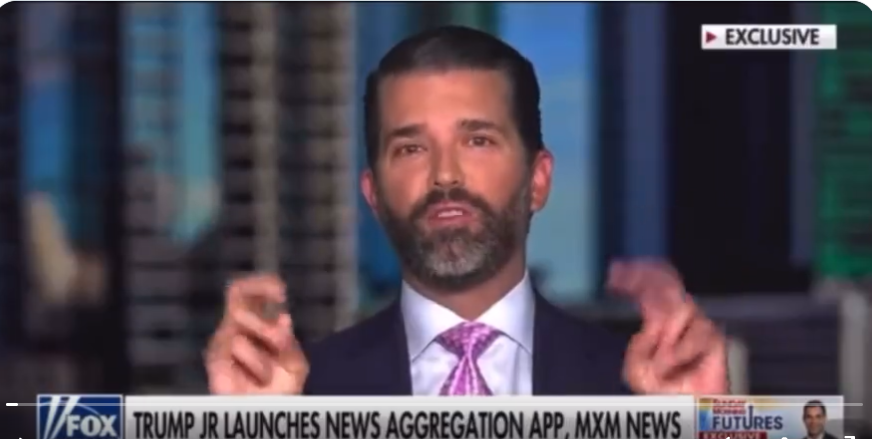 I suppose it can be said that if you’ve seen one coke-fueled rant of Donald Trump, Jr.’s that you’ve seen them all. But they actually are getting more interesting lately, because he’s clearly running out of steam. He’s got 1% inspiration, from whatever trite fact he’s pushing that day and he pushes it with 99% perspiration. That’s where the cocaine comes in. It gives Junior the momentum he needs, the faux passion. The guy is an empty shell. He has no real drive to push his “news” platform. It’s just another ploy in a life of characterless manipulations and ploys.

Junior’s latest “achievement” is to put together his own news platform, response to which has been so far underwhelming. Maria Bartiromo gave him her platform from which to pitch his platform and all he did was take off like the horses at yesterday’s Kentucky Derby.

This clip is interesting because both parties are desperate. Bartiromo just wants him to shut up so that she can steer the conversation and Junior has only one take performances left in him. When he stops raving, that’s it for the day.

After several minutes of Junior’s long, rambling rant, Maria desperately tries to interrupt and get him to stop, with no success. pic.twitter.com/0m3FDW8lYf

If Twitter gave an award for Best Daily Tweet you would win. That is spot on, the underachieving kid making a career out of having a famous daddy. You notice Rob Reiner and Michael Douglas didn't go that route. It's because they had something of their own to put into the world.

Fox News continues to book Junior for the same reason all entertainment venues book guests, they have space to fill. Junior’s status is 5th banana and he knows it. When news is slow, or deflection from a given story is needed, Junior is called to come on and fill air time. That’s it.

As to the larger issues, why does he continue to appear in public this way, it’s because he’s seriously ill. Drug addiction is no small thing. And Junior may have tried to stop in the past. We don’t know.

I wouldn’t be in his shoes for all the money in the world. I had to go through a Xanax detox once, because the drug was affecting me badly and never should have been prescribed in the first place. If I had it to do all over again, I would have gone into a hospital program. It was brutal. When the body is accustomed to a toxic drug and doesn’t get it, unremitting hell doesn’t begin to describe the experience of withdrawal. At Junior’s level of consumption it is going to be arduous, and that’s understating it, for him to detox and recover.

He makes it plain how much he despises Hunter Biden. As I’ve said before, he envies Hunter, because Hunter did the one thing that Junior needs to do, desperately, and knows that he can’t do. Or at least so far, that he won’t do.

If there’s a bigger tragedy than this playing out in public life every day, I don’t know what it is.

Ask anybody in a 12-step program what it takes to recover and they will tell you, you have to hit bottom first. You cannot become teachable until you hit bottom.  I don’t even want to think about what Junior’s bottom is going to look like.