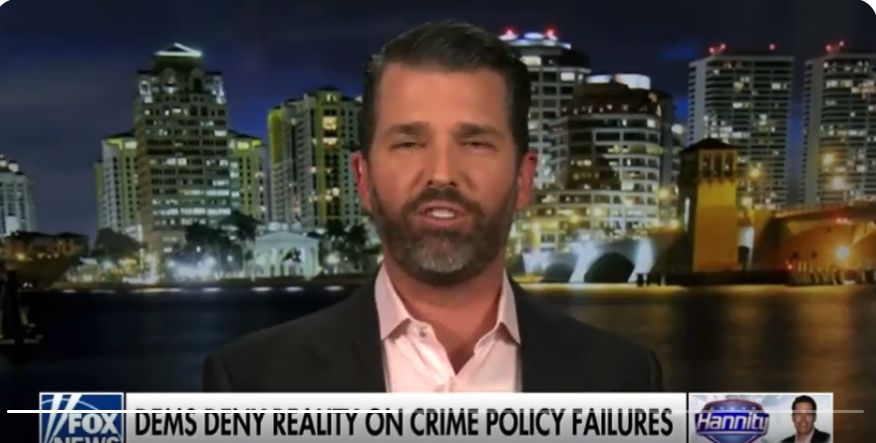 I don’t think you need to study psychiatry in Vienna to see the quandary that Donald Trump Jr. is in. According to his cousin Mary, who has studied Freud, Jung and the like, Junior never became his own person. He stuck with Daddy for the money and the power. He’s still sticking with Daddy, although he’s now a middle aged man in his 40’s, not because he wants to, but because he has no choice.

So tonight, he went on Fox News, not for the first time nor the last, to rail about Joe Biden and his terrible son, but you can see his heart isn’t in it. He doesn’t believe what he’s saying, he’s just animated, loaded as usual, and going through the motions.

If he was in acting class the director would have stopped him by now and said, “Go home and get in touch with the character and don’t come back until you are.”

The only problem with that, is that the “character” is a son, who doesn’t know a father’s love, who doesn’t even really know a father’s like and has spent his life mostly hoping to avoid a father’s wrath. And his job is to go on TV and rant about how another man, who does love his son, supposedly has a son that is “corrupt” and bad to the bone — but the truth is that Don Jr. knows, as does the world, that Biden pater and fils love one another.

It’s a reality that Junior doesn’t know and he’s less of a person for it. And he gets that on some level and so does everybody else.

He ‘gets to read reports?” What does that mean? He’s running a think tank now and people bring reports to him to get a foreign policy analysis? Oh, please. I know the GOP is screwed but even they are not that deranged.

What I love is how he takes the posture that our own intelligence people are lying to us. Wonder where he got that one from? Oh, yeah. Helsinki. It all comes back now.

He wanted to shorten it to
Cyber
Unit for
Negative
Things

but was talked out of it.

What a short while ago it was when this man was the standard bearer for the Republican party. My God, how they have plummeted. The mind reels.

That’s how it was. And this is what you see Junior doing on Fox News tonight, Helsinki II.

What a disgrace. No wonder he gets loaded all the time. He’s got money and doesn’t have to work but what good is that if you have to sell your own soul? Mary Trump is right, he’s not his own person. He’s another shill for Putin. As Junior said years ago, “We see a lot of money pouring in from Russia.” We know we know. You could have told us that, even without telling us that.