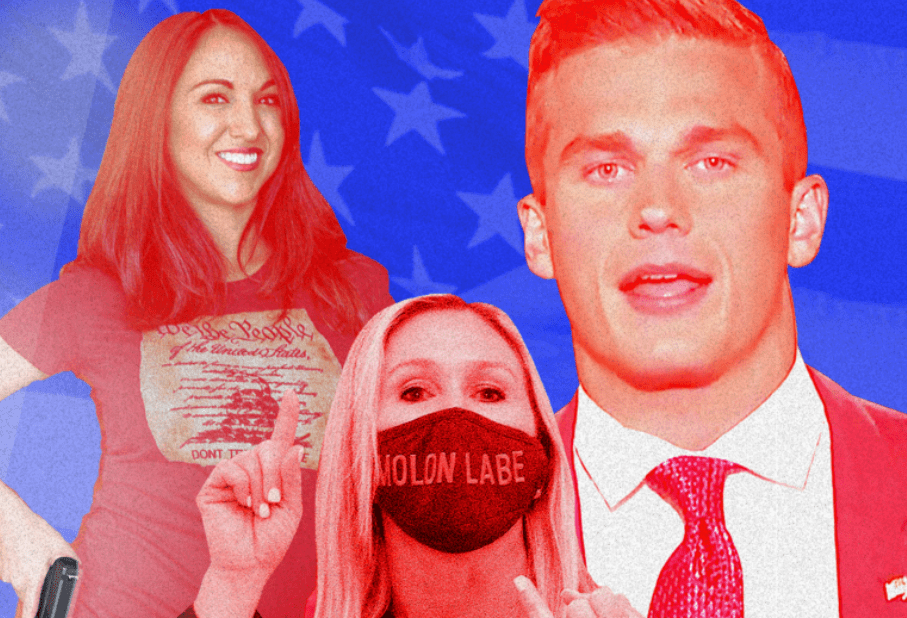 This has been a glorious evening and believe me, I think we should party down. Sing it with me now. The lyrics match the intelligence level of the man who inspired them.

“Ding, dong, the dope is gone. Stupid dope, go smoke your bong. Screw your cousin on the lawn. Ding dong the biggest dope is gone.”

The evening started out well with Madison Cawthorn’s favored opponent, Chuck Edwards, taking a quick lead and then Cawthorn narrowing the gap and then the sands of the hourglass ran out, sands being districts. There were only a few left when Dave Wasserman of the Cook Political Report, he who reads the political entrails most savvy-ly said, “I’ve seen enough,” and called the race.  Over 90% of the precincts had reported but the ones who were last were Cawthorn strongholds — or so he thought. 45 minutes later the Associated Press called it.

We are told that Cawthorn called his opponent and conceded the race. I have to admit, that surprised me. Roy Moore pretty much set the standard for not conceding and then Donald Trump carved it in stone and made it Rethug policy. So imagine my surprise.

Then, a few minutes later, this was posted.

One sentiment that is almost completely absent tonight is sympathy for Cawthorn. Pity, yes. He inspires that. But almost nobody has a drop of sympathy, because the man was warned so many times and he simply ignored it all. He wouldn’t listen to Kevin McCarthy, we know that. Maybe Matt Gaetz tried to tell him to chill. We will never know. But if anybody is the architect of his own adversity, I have never seen a better example than Madison Cawthorn. He is the poster chlld for political self-immolation, if one is ever needed. Intelligencer:

“No one from the Freedom Caucus guys to people in MAGA world are happy with how he conducted himself,” says one ally of Donald Trump. There is a sense that he had behaved even worse than controversial figures such as Marjorie Taylor Greene, who, for all inflammatory rhetoric, was not viewed as “super conceited and cocky.” Another plugged-in Republican strategist put it more bluntly: “The guy is just a total fuckup and shows the limits of patience and tolerance that the MAGA movement has for complete and utter idiots. It’s breaking laws and recklessness in personal behavior.”[…]

Even such tepid praise [Trump saying he made “foolish mistakes”] marked a major fall from glory for Cawthorn who took office just four months after his 25th birthday and was an immediate Republican star. On the strength of his youth — and what turned out to be a fabricated back story about the obstacles he had to overcome after being paralyzed in a car accident at the age of 19 — he had not only won an open Republican primary without Trump’s endorsement but had then gone on to be a featured speaker at the 2020 Republican convention.

Still, there was one shred of sympathy for Cawthorn as Tuesday night drew close. After reading a long Politico profile of Cawthorn describing him as unraveling, one freshman Democrat told Intelligencer that they came away with a feeling of pity towards a colleague. “I just felt more sympathy than anything else. This is a person who clearly has ambition whose pain and whose ability to create new life through that pain could be inspiring but instead has become self destructive.”

He has ambition, in the abstract, perhaps, meaning that there are things he wants. Don’t we all want certain things, or achievements? But anybody who has truly achieved anything learns a lesson early on: discipline is key to success. Discipline to do a given task, to apply oneself to a craft, a profession, is what builds success. Doing it, even when you’re not in the mood to do it that day. That is the mark of a master of a given skill or profession. People have greater or lesser degrees of natural talent. The race doesn’t always go to the swift, it frequently goes to the diligent.

Cawthorn never learned something that basic. He got to an incredible place in life very young. If he had possessed a scintilla of self awareness, self preservation at least, he would have realized that he had to hang onto this once in a lifetime opportunity and build something.

But he never realized that real work was involved. He figured that this was all a PR job, just looking good, saying the right things. And if he had even just done that right, at least, he probably would have hung on.

Instead, he chose to see himself as bulletproof. Even Trump didn’t want to endorse him and only did so at the 11th hour and then only on Truth Social. My personal opinion is that it was on the order of a mercy fuck from Trump. He didn’t want to go it, but the guy was so desperate, so Trump said, alright, here.

Now Cawthorn knows he’s not bulletproof. I don’t know where he’ll go from here, nor do I care, but I am laser focused on what he does in his lame duck days in Congress. I think that we are in for a ringing final act, here.