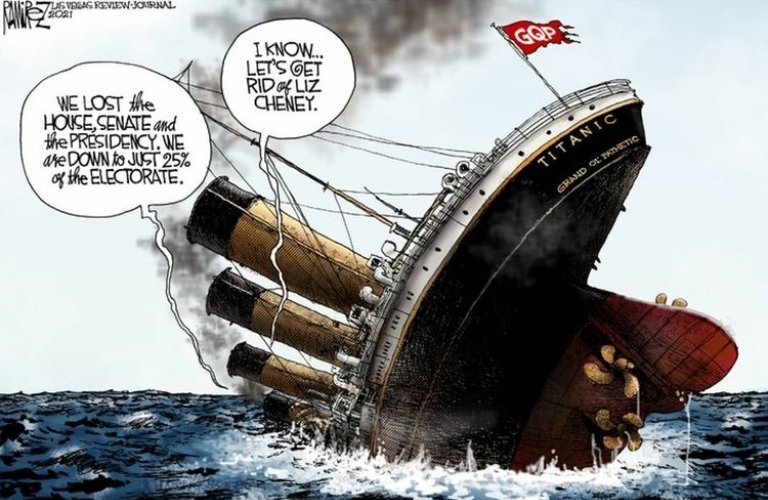 You recall Miles Taylor aka “Anonymous.” He announced recently that Thursday, the day after the vote to oust Liz Cheney, a group of prominent Republicans, ex-Republicans and Independents will announce a “resistance of the rationals against the radicals in the GOP.” A third political party, perhaps? Or a strong coalition within the GOP itself? We will find out soon enough.

One person who has already found out about this is Donald Trump, who went off his nut. He published this on his toy blog. 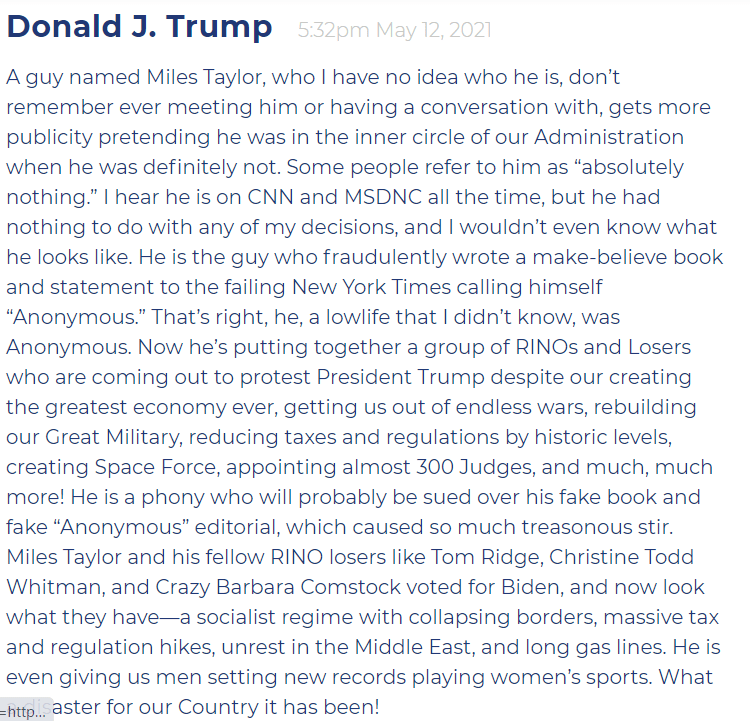 He’s come up with a few good quotes by Ulysses S. Grant.

“If we are to have another contest in the near future of our national existence, I predict that the dividing line will not be Mason and Dixon’s, but between patriotism and intelligence on the one side, and superstition, ambition, and ignorance on the other.”

That pretty much nails it. As does this.

* West Point admissions mistook his H for an S.

Kevin McCarthy announced yesterday, to the disbelief of all, that getting rid of Liz Cheney was a way to “unite” the party. Taylor says no way. Greg Sargent at the Washington Post kicks this around and his views are worth reading.

But Taylor told CNN that McCarthy is kidding himself. “My message to him is that the civil war within the GOP is not ending,” Taylor said. “Today, it is just beginning.”

The group threatening a third party reportedly contains more than 100 Republicans, including numerous former elected officials. They will release an open letter on Thursday demanding specific changes from the GOP, while warning:

On CNN, Taylor elaborated, vowing that his group will keep “defending the good Republicans out there,” citing defenders of democracy such as Rep. Adam Kinzinger (R-Ill.), while “opposing the radicals” with third-party challenges.

This effort would be electorally doomed, as David Jolly explains. But that doesn’t render the broader project of challenging the GOP useless. The fact is we need as many right-leaning voices as possible calling out ongoing GOP radicalization even if they don’t gain power.

Of course, there are other objections one might pose. It’s true, for instance, that people such as Taylor and Cheney are hardly good spokespeople for democracy.

Taylor was an official in the same Department of Homeland Security that separated families. And as Adam Serwer argues, Cheney is associated with the stoking of Islamophobia and assaults on the rule of law linked to the war on terrorism, which helped till the ground for the GOP’s escalating descent under Trump.

This is all true. But we don’t have our choice of better advocates among Republicans. This is inherent to the current problem. And as bad as their records are, we need center-right voices who are willing to flatly articulate the principle that accepting democratic electoral outcomes is a precondition for a functioning liberal democracy.

We may disagree vehemently with Taylor and Cheney about what constitutes legitimate use of the state power that elections place in officials’ hands and even about what it means to uphold the rule of law itself. But if they will accept it when our vision of these things prevails in elections, that’s something we want in a center right.

I look forward to seeing what this group is. And Donald Trump will be pumping out the vitriol, that much is certain. Trump has seen the path to 2024 as totally clear for him and the nomination his for the asking. He’s going out on the campaign trail very soon to raise money and these dissenting voices are the last thing he needs. This will be something to watch.