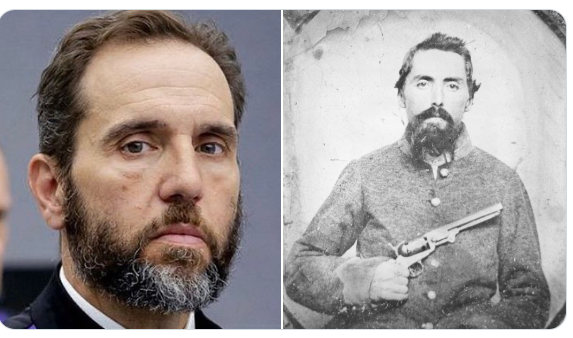 “Jack be nimble, Jack be quick. Time to have Donald’s head on a spit.”

Jack Smith is nimble and quick. He also is driven, as evidenced by the fact that he worked on Thanksgiving.

Here’s what he wrote and I guarantee, nobody in Trump world was glad to see it. And I’m sure this letter went straight to the high priced, high powered guys that Trump paid in advance. No wonder Alina Hobbs was mewling on TV yesterday about how Thanksgiving means not prosecuting/persecuting Trump. 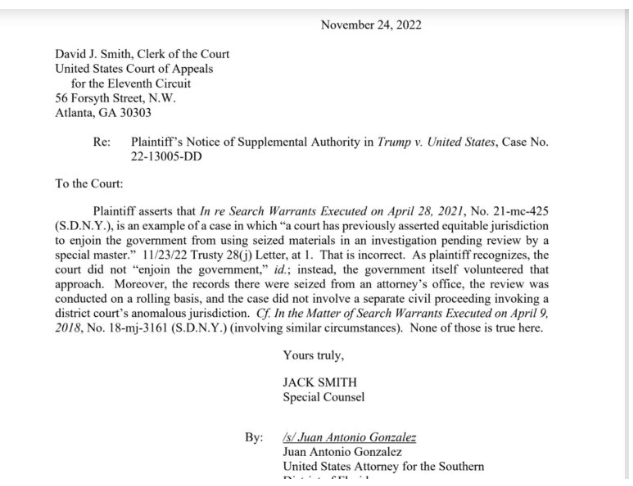 One paragraph, but it undercuts Trump’s lawyers arguments succinctly. Jack Smith is actually arguing the facts and the law and Trump’s lawyers are trying to baffle with bullshit. The latter approach works with incompetent lawyers, but that is not the case here. Smith is exposing them for what they are.

And Trump’s lawyers know that. They know that all that they can do is throw something at the wall and hope that it will stick and stick just long enough to get the desired outcome, which is delay. That is Trump’s strategy in every legal case he’s ever been in, delay, confuse, wear the other party out, make them decide that it’s cheaper to settle so they can just get away from Trump and all he represents.

That’s not going to happen here. Trump has bitten off way more than he can chew and he will be held accountable now. Yes, I know you’ve been hearing that since 2016. And you have seen him slither away, consequence free.

So far you have. That’s true. But the situation at hand now is that Trump is gambling that he can stall everybody and avoid criminal charges and then get the GOP nomination and that will throw the requisite monkey wrench into the works. And then if he wins, oh yes, of course the first thing he does is make all this go away, whatever that takes. Think of the Roadrunner dynamiting a box marked Rule Of Law and you’ve got it.

And if he doesn’t win….Trump will think about that tomorrow.

It’s all a gamble and Trump is not much of a gambler. After all, he ran a cash business like a casino straight into the ground. That is not easy to do. The house never loses except when the house is owned by Trump.

The plain truth now is that Trump has too many enemies in his own camp to pull off the feat he did in 2016, and even then he pulled it off by a narrow margin. He doesn’t have the same odds this time. He doesn’t have the people who voted for him the first time because they believed that the TV guy could actually deliver, maybe, on all this big promises. That’s why a lot of people voted for him, put up or shut up. You saw what he put up his four years in office.

And now as a three time loser of elections — and we haven’t seen what happens December 6. That’s one more railroad spike in the coffin — he’s not standing on the same ground. A lot of the GOP wants him gone. They are tired of losing. Paul Ryan said as much the other day.

Never forget that Trump survived as long as he did because he had the GOP insulating him. That’s over now. The failure of the red wave to materialize and the fact that Trump couldn’t take a victory lap, put all this on very different footing. If he’d had the red wave he fantasized and could take the victory lap and start fundraising, he’d be fine. Instead, the GOP lost bigly and they’re blaming him. And the polls show Ron DeSantis coming up from behind.

They all thought that the Titanic was unsinkable, too, until the night she went down.