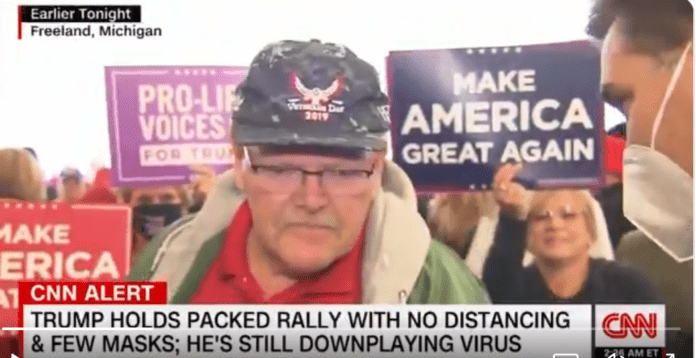 We are still more than 18 months from the 2022 midterm elections, and already we can see the outlines of the campaign strategy starting to come clear, at least on the GOP side. The outlines of the Democratic side will likely start to become a wee more clear over the next 3 months or so.

Thanks to his obsession with financially draining his gullible GOP base by whatever means necessary, El Pendejo Presidente is still the titular head of the GOP. But that doesn’t mean that Trump is the presumptive front runner for the GOP in 2024. In fact, in the straw poll from CPAC, a Trump fortress, almost 2/3 of respondents didn’t want Trump to run in 2024, although they wanted him active in the party.

It gets worse. In a recent poll, 55% of independents would not vote for Trump again, while 37% would at least consider it. This at a time when the GOP consists of 29% of registered voters, while the Democrats comprise 40%. That leaves a whole lot of independent voters that Trump can’t convert.

But forget for a moment whether or not the GOP is stuck with Trump in 2024. There is one thing that the GOP is already irrevocably saddled with, and that’s the Trump base. In fact, that’s all they have, and they damn well know that too, since nobody else will touch them with fire tongs.

Which means that the GOP 2022 strategy in messaging will be white privilege, white victimization, stoking fear of the others, and a healthy dose of vote theft stopping poll monitors! And GOP legislatures nationwide are already peddling the snake oil juice, but because they’re Republicans, they’re doing it stupidly.

Georgia has had no excuse absentee voting for something like 15 years now. But it’s only after masses of Democrats and minorities used it to flip Georgia blue for Biden, and take the Senate that it needed to be reformed. It was only after local merchants started showing up at polling places with slices, sammies, and bottled water that it became a crime. Jesus Christ! The point of the line is to scare them away, not give them a Golden Corral buffet! And in Arizona, after multiple court battles, and at least three recounts, including a hand recount, the GOP state Senate has turned the whole mess over to a Q-Anon conspiracy nut to finally get the damn thing done right!

And they’re just getting warmed up. Following the Derek Chauvin guilty verdict this week, with white paranoia at a fever pitch, GOP legislatures are rushing into the breach, to protect racists from civil damages from driving over protesters in their cars. Allowing peaceful protesters to be jailed, at least overnight until their first court appearance, and redefining what constitutes a riot.

For one thing, the proposals being offered and passed are so off the chart that they border on bat shit insane. And second, somewhere around 90% of it is blatantly unconstitutional! And the funny thing is that the GOP knows it! And they don’t care. Because their base has the memory span of a three week old puppy. Make the headlines show you’re fighting for them, and they won’t even notice weeks, months, or years from now when the laws are thrown out by the court. It’s all about the messaging.

Because the GOP is going with the old, established playbook. You know, the one that says that the party in power, especially total power takes a bath in the new President’s first midterm elections? People decide they want to restore balance to governance. But the whole problem with that is that that playbook is dependent on the party out of power having a coherent, competing method of governance for people to choose from! And the GOP doesn’t have one. Their only message is a floating whack-a-mole message aimed at their pure base. Their 2022 strategy is to keep coming up with whatever wild, sadistic, racist rants they can come up with in order to scrape out every last man-jackin’ Trump voter in 2022. While they do everything in their power to suppress the vote.

And there’s the Achilles heel. Because while the GOP can try as hard as possible to restrict the vote, the one thing that they can’t do is to restrict voters! And brain dead Trombies set aside, the vast majority of voters in America still vote their pocketbook, and their values. And what’s the comparison?

This is the challenge to the Democrats in the next six months. Biden is riding high on his Covid relief bill, he’s acing it on the economy, and the majority like his infrastructure bill. Get the infrastructure bill passed, as massive as possible, and by whatever means necessary. Get that money flowing to individual states and cities by spring, and Biden will be King Kahuna in November. Get Joe Manchin’s head out of his ass long enough to reform the cloture vote rule for civil rights and voting rights bills, and get the George Floyd Police Reform Act and the For The People Act passed. If you pass the Floyd Act, Biden energized the African American base, he didn’t just talk the talk, he walked the walk. And the For The People Act would undo 90% of what GOP legislatures are trying to do to stifle the vote.

The comparison couldn’t be more stark, nor more clear. On the one hand, you have a party in power that is bending over backwards to keep it’s promises, and to work for the people it was chosen to represent. And on the other hand, you have a party totally committed to stopping them. That’s it, no plans, no agenda, just desperately trying to not be made to look like shit.

The 2022 midterms are all going to come down to turnout. And the Democrats have the chance in the next six months to put out a record that they can run on, that they can boast about, and that they can use to show GOP obstructionism for what it is. The polling and voter registration numbers all favor the Democrats. And in 2018, the Democrats unleashed a literal tsunami that righted the ship. If we can get them to turn out in 2022 in the same numbers, then Joe Biden has a clear field for the second half of his first term. It’s all in our hands. Don’t touch that dial.