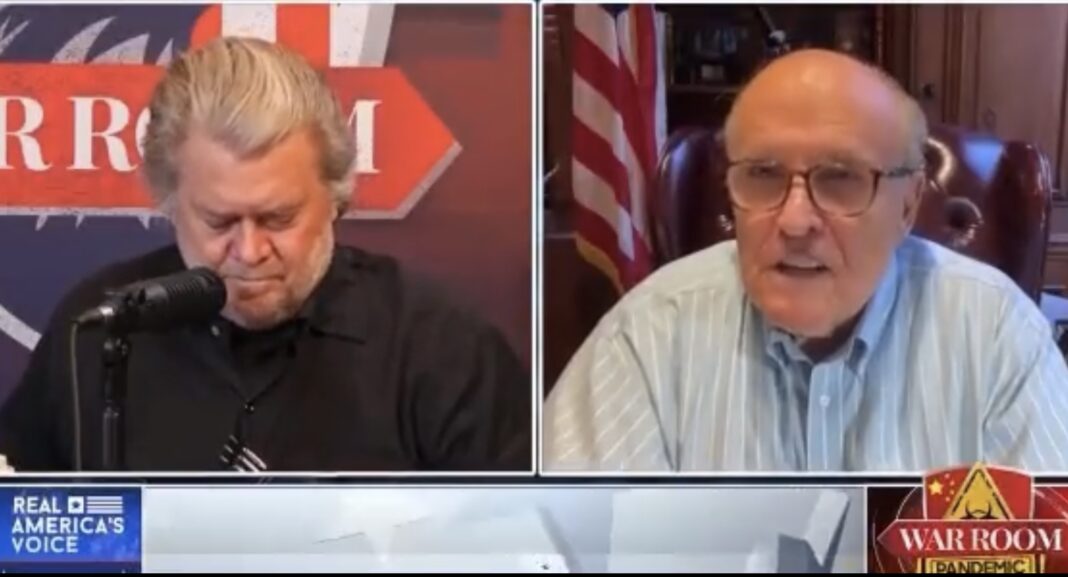 The surest way to tell that we are in good shape in the coming election is that Republican operatives like Rudy Giuliani and Steve Bannon are trying to gin up their base voters by claiming that we cheating Democrats are fixing to cheat.

In the following clip Rudy is running his head on Bannon’s WarRoom podcast about mail-in ballots and saying that Republicans will have no ability to “observe” them. Now, Rudes, I am sure that every state in the union has a process for bi-partisan review of every step of the voting process during the counting and, hell, in Arizona ballots were “observed” after they had already been tallied to the point they were being damaged by all the handling, and, if anything, Democrats gained votes during the process.

I’m sure you’ll find the evidence. Give Mike Lindell a call.

BREAKING: Giuliani formally declares he and his Republican cronies have already begun cheating in the midterms.

How are these crooked old farts not in the slammer?

This is a great sign for democrats….these losers only claim cheating when they are losing or about to lose

you sound worried, Rudy Tooty.
And you should be.

We don’t need to cheat. We have the votes. All the votes. Because we fight for human rights, equality, and fair wages/insurance. We don’t believe anyone is above the law, especially domestic terrorists.
Giuliani continues to bring shame to his name by his non-stop lying. Sad.

Hey look. A guy that ripped people off for a wall that never got built, and a former lawyer who lost his law license for lying is also being sued for lying.

Two of a kind.

Our county has a very strict process for handling mail-in ballots and it permits observers in the room where they are processed. I'd be surprised if other jurisdictions do not do the same. Rudy appears to be seriously constipated.

So Bannon is reduced to having Rudy on … pathetic

It’s fixed, republicans stay home or write in Trump for every office. Send a message that you won’t stand for this.

Grandpa is having a bad day.. pic.twitter.com/Sy8eKMnQVo

🤣🤣🤣 He does look constipated.

Rudy should really see a doctor about that… a good movement might relieve his headache.