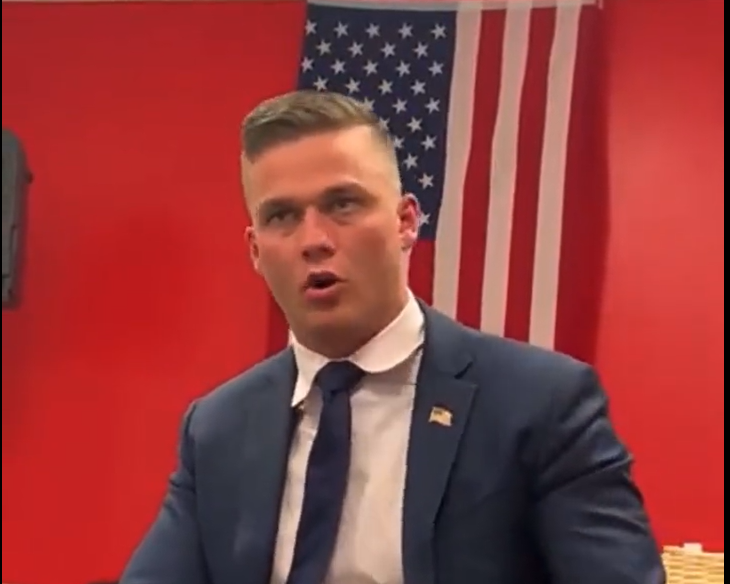 In a setting which is reminiscent of the Four Seasons Landscaping debacle, where Rudy Giuliani and his Strikeforce attempted to put a coat of whitewash on things and made fools of themselves all over the world, Madison Cawthorn’s last hurrah was not at a normal venue, either. His opponent was at a “low-key but well kept inn” across town but Cawthorn was in an auto detailing shop. What’s up with that? There weren’t enough coins left in the campaign budget to rent out the Holiday Inn for a night?

A reporter from the Independent was there and he describes a scene where journalists were kept out, until the point that they were asked to leave altogether. It puts me in mind of that line from Mad Men, “She died the way she lived, answering other peoples’ phones.” Cawthorn’s dead campaign resembled his brief career in Congress, hostility to the press, cheers when he went down in flames — from as far away as Ukraine, mind you. The Ukrainians hate him for calling their beloved president Volodomyr Zelenskyy a “thug.” Look who’s talking.

On Tuesday evening I was asked, firmly but politely, by the Hendersonville police department to leave the premises of a small auto detailer and tire shop.

But this was no ordinary auto detailer and tire shop: It was the home of the final (?) flameout of freshman Rep. Madison Cawthorn, who had just lost his primary in a stunning night, that didn’t even extend — as some analysts might have expected — to a June runoff election. Thanks to a resounding showing by Cawthorn’s main rival, state Sen. Chuck Edwards, it was all over for Cawthorn.

It wasn’t explicitly mentioned, but my unceremonious rejection from the party appeared to be at the behest of campaign staffers for the youngest member of Congress.

The reporter started snapping pictures of the exodus from Cawthorn’s “headquarters” and then the tone of the police changed, so he went across the street to take photos.

In the end, the finale of Cawthorn’s campaign mirrored his entire House career. Contempt for journalists — who were not allowed inside the building for the entirety of his watch party Tuesday evening and ushered out when it ended — was obvious. The reporters present witnessed a stunning and sudden desertion of Cawthorn’s closest supporters and allies as it became clear that he’d lost.

Cawthorn finds himself friendless and alone. Those of us who comment on this have been accused of being unkind but I don’t feel that way. The way I see it, Cawthorn’s demise is a morality tale. Seriously. The young should study it and people who get into politics should take it as a lesson in what to do and not do.

Cawthorn’s “friends” may have largely been hangers on and not real friends. Ask anybody who’s been up and down in Hollywood, when you’re up, when your star is rising, making “friends” is easy. They’ll make you. They’ll beat down your door. But when your star sets, you’ll see the passing parade move on to somebody else who has more mojo.

Remember Sinatra singing, “Nobody loves you when you’re down and out?” It’s true. It’s a harsh lesson but one that Cawthorn apparently thought that he was above learning for some reason. Now he knows.

He did many things to horrify this country, and the world, but when he became a fixture on Russian TV and insulted Zelenskyy, that was a bridge too far. But it didn’t stop Cawthorn, he had to keep hitting lower and lower bottoms.

I have zero sympathy for Cawthorn. If he had learned after the first couple of missteps, that would be a different story. You could classify him as slow, but not entirely classless. No, he is classless, clueless and brainless. And that combination did him in.

But he probably will reincarnate as a political pundit on right-wing TV. I fully expect that. If he doesn’t end up there, that will be the surprise. And once he’s there, on Newsmax, wherever he lands, then it will be life in Never Never Land. He’ll never learn anything, never know anything, he’ll just be a talking head, mouthing the platitudes that the worst dregs in our society listen to to keep going. I don’t envy him the journey.