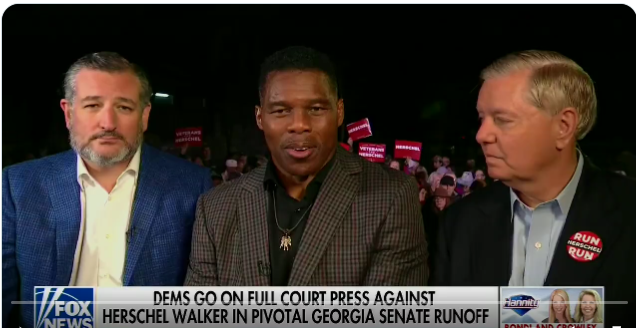 This will make you want to pop a vessel, it’s so blatantly dishonest. However, it does have its comical side, because it shows how terrified the GOPers are. The Republican National Committee, the National Republican Senatorial Committee, and the Georgia Republican party today filed an “emergency appeal” to stop “illegal advance voting.”

Yes, it’s a bit of a stretch but the bottom line is when you’re losing, you need to use whatever tool you’ve got to stay working, and right now the monkey wrench is the tool of the hour. It just got thrown into the procedural works. It’s called “sabotaging democracy” and the same party that is filled with members who cry “election fraud” are now out to stop advance voting by filing these absurd petitions.

Now before you pop a vessel, know two things: 1) Early voting has already begun in Douglas County, because Brad Raffensperger allowed it, since the November 8 General Election ballots have been certified. Plus, a Georgia judge ruled that early voting could take place on November 26, the Saturday after Thanksgiving.

In the ruling, Fulton County Superior Court Judge Thomas A. Cox Jr. wrote that after he “considered the moving papers, arguments of counsel, and references to legal authority,” he found that Georgia law didn’t bar polls from opening on November 26.

Cox in the ruling wrote that state law “does not specifically prohibit counties from conducting advanced voting on Saturday, November 26, 2022, for a runoff election.”

This has got the Republicans all knotted up and in a tither, because they already asked an appellate court to block this ruling, the appellate court told them to get screwed and so now they’re going to the state supreme court, by gosh and by golly.

The good news is that the appellee, the Democratic Party of Georgia, will file a response tomorrow morning. They had 24 hours notice, or less, but I have no doubt but that they will get the job done.

If we had only a fraction of the money that has been blown, in the State of Georgia in particular, on ludicrous recounts and frivolous litigation like this, the public coffers would be a lot fatter, I’ll you what.

The poll that apparently got them so incensed was done by AARP and shows Raphael Warnock leading at 51% to Walker’s 47%.

But the details are even sweeter. Warnock leads younger voters, 18 to 49, by a 24-point margin. Damn. I mean, that is impressive. Walker holds a nine point lead among voters over 50, which is also impressive. And the moral of the story is, as always, Get Out The Vote.

This race has been a circus from the outset, expect it to be that way in the days to come, down to the finish line. Here’s a snippet from Walker’s latest appearance with his BFFs Ted Cruz and Lindsey Graham, talking about his “erection.” I don’t think this has been doctored, Acyn is an extremely reliable source.

Walker: This erection is about the people pic.twitter.com/rx9Ju595q3

That’s the best of the GOP, friends, right there, up on the screen. Take a good look. Take a picture so your grandchildren can know, too.