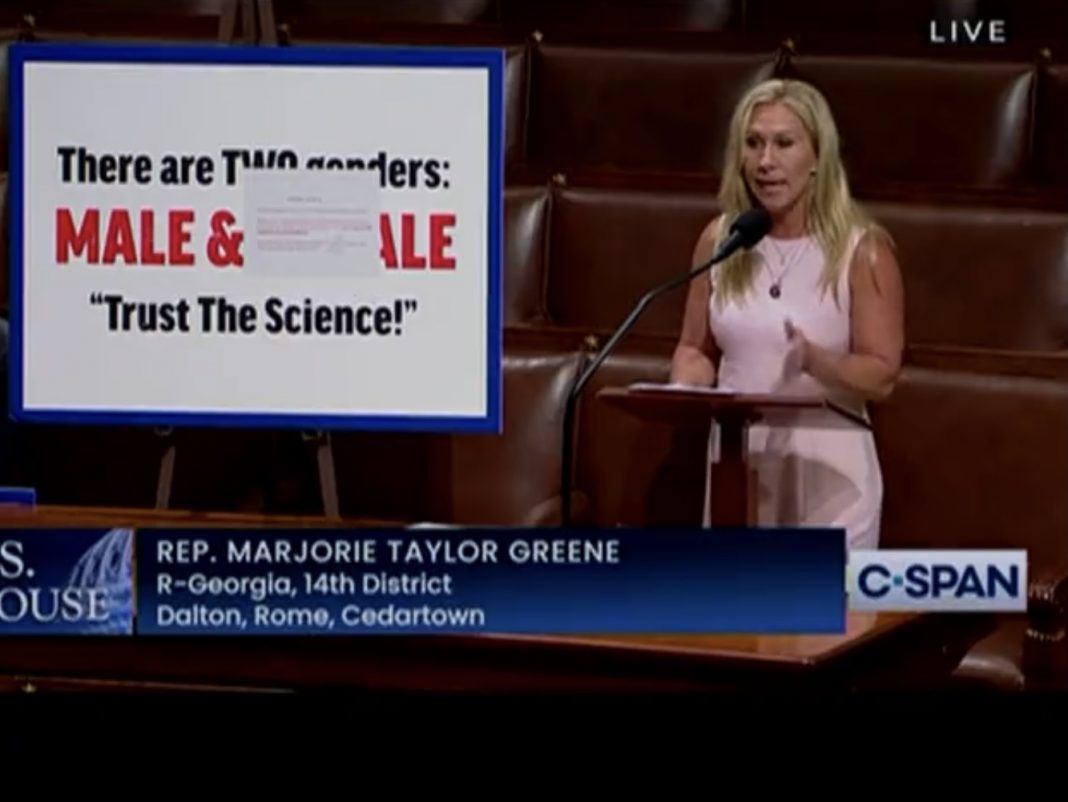 Marjorie Taylor Greene is mad as hell that the DOJ won’t prosecute the “criminal” who stickered the transphobic sign she put up outsider her office, and she descended onto the House Floor Tuesday to use a personal point of privilege to whine about it.

“Rep. Marjorie Taylor Greene (R-GA) took to the house floor on Tuesday to rail against the “mistreatment” she claims she has received as a freshman member of Congress and the “crimes” she says have been committed against her. Specifically, she says the Department of Justice has refused to prosecute the staffer who has repeatedly vandalized a transphobic sign posted outside her office…
… “I felt very unsafe,” Greene said on the floor Tuesday. “I felt my life was in danger.”

…Greene, who vehemently opposes LGBTQ rights, posted the sign outside her office on a wall facing the office of Rep. Marie Newman (D-IL). Newman, a sponsor of the Equality Act whose daughter is transgender, posted a trans pride flag outside her own office in February of 2021. Shortly after that, Greene posted her sign, which read: “There are TWO genders: MALE & FEMALE. Trust The Science!’”

Marge was so terrorized by the senseless act of sticker violence that she contacted the Capitol Police, who had absolutely nothing better to do in February of 2021, like say investigating who had strewn pipe bombs about the place, demanding that they identify the post-it bandit.

Greene says she demanded surveillance cameras be installed to monitor her sign because someone stuck a sticker of Jesus on it saying “I never knew you MTG” pic.twitter.com/Vzo5GkENhQ

And the flatfoots hit paydirt.

The attacks on my office and my Christian faith were committed by @RepAuchincloss Chief of Staff, Tim Hysom. https://t.co/aetjE3WuQM pic.twitter.com/4FpG4gqJQM

So, now that she had this Hysom thug on video, well surely Merrick Garland would have drop everything, like finding the shit-heels (heh) who had defecated in the halls of Congress just days before, and put him in the big house, right?

“She also expressed outrage on Twitter that Attorney General Merrick Garland traveled to Ukraine to discuss Russian war crimes instead of focusing on prosecuting Hysom for vandalizing her sign.”

How could the DOJ not prosecute someone on video harassing a Congresswoman? What is the world coming to?

Marjorie Taylor Greene visited Congress in 2019 with her friends and spend their time giggling vandalizing Alexandria Ocasio-Cortez guestbook and wall notes. All while yelling taunts at her staff through a mailbox slot of a locked door. pic.twitter.com/ccTufF90Z9

Stick a sock in it, Marge.