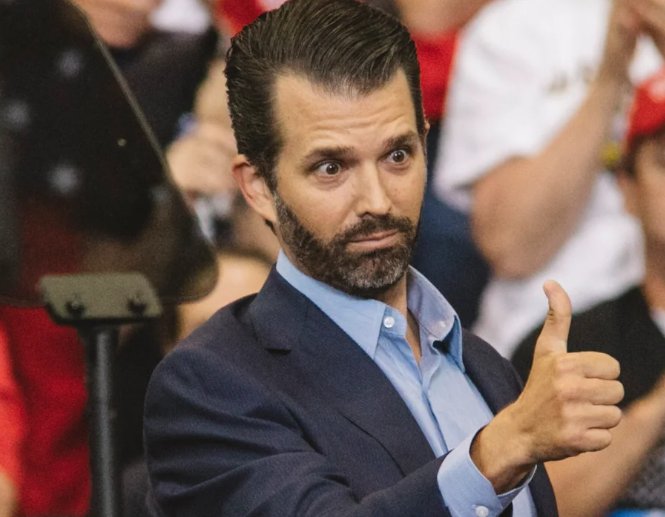 You knew that Donald Trump, Jr. is as dumb as a rock but new revelations from the transcripts of the January 6 Committee indicate that if he wasn’t to the MAGA manor born, he would probably be a MAGA by choice, because he actually believed all of John Eastman’s hoopla.

CNN is parsing through a new batch of transcripts of testimony given to the January 6 Committee and Junior is almost incoherent. Must be the effects of too much animation, I guess.

Donald Trump Jr. told the committee that the reason he texted former White House Chief of Staff Mark Meadows a detailed plan about how to ensure his father would get a second term two days after the 2020 presidential election was because he thought the ideas were “the most sophisticated” and “sounded plausible.”[…[

The November 5 text message outlines a strategy that is nearly identical to what allies of the former President attempted to carry out in the months that followed. Trump Jr. makes specific reference to filing lawsuits and advocating recounts to prevent certain swing states from certifying their results, as well as having a handful of Republican state houses put forward slates of fake “Trump electors.”

If all that failed, according to the Trump Jr. text, GOP lawmakers in Congress could simply vote to reinstall Trump as President on January 6.

“Perhaps in reading it, it was the most sophisticated, you know, and detailed, and again, about things I don’t necessarily, you know, know too much about, but it sounded plausible and I wanted to make sure that we were looking into the issues brought up in the text,” Trump Jr. said.

It would only sound plausible to somebody who knew absolutely nothing about how any of this works — which is why it sounded that way to Junior. Thank you, Junior, you have confirmed, once again, our worst fears.

Meadows did not initially respond to the original November 5 text, but when Trump Jr. followed up the next day to make sure he saw, Trump’s then-chief of staff texted, “much of this had merit. Working on this for PA, so Pennsylvania, Georgia and North Carolina already.”

Another winner from the circle chimes in.

The article goes on to quote Lindsey Graham next and that’s a massive disappointment. For the nth time people are wondering, what the hell happened to Lindsey Graham that he became Donald Trump’s lapdog?

After the 2020 election, Sen. Lindsey Graham pledged to become a “champion” of then-President Trump’s election fraud claims – if only Trump’s advisers would give him information about dead voters, according to an account given to the January 6 committee.

“Senator Graham was saying, ‘Get me your information,’” Trump lawyer Christina Bobb relayed to the House Select Committee about what Graham said in a meeting days before the January 6, 2021, insurrection.

“Just give me five dead voters,” Bobb said Graham told then-White House Chief of Staff Mark Meadows and others in Meadows’ office at the White House.

“Give me, you know, an example of illegals voting. Just give me a very small snapshot that I can take and champion,” Bobb added, relaying what Graham said at the time. […]

“Graham was like, ‘Oh, I’d love to support the cause. I think it would be great to, you know, really show all the fraud. Send me a memo and show me, you know, what information you have got. I’ll champion it,’” Bobb also recalled from the conversation with Graham.

According to a transcript of Bobb’s House testimony released Thursday, Graham received a memo from the legal team working with Trump, titled “Chairman Graham dead votes memo for your consideration.”

But Bobb added: “He did nothing with it.”

Lindsey is now backtracking this. CNN reports that the book “Peril” describes a similar exchange between Graham and Trump’s allies. Graham admits to having received the memo but claims that it didn’t prove up the fraud that was the subject of their discussions, so he didn’t do anything. Maybe that’s the case. But the fact that he was even contemplating it, knowing how slim to none the chances were of uncovering widespread voter fraud, is stunning in and of itself.

The ongoing release of transcripts promises to be something.