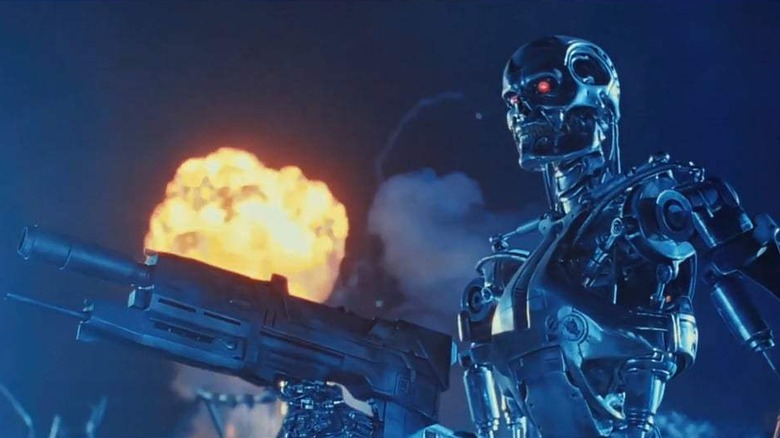 Judgement Day has already happened in the world, my friends. No, it wasn’t an atomic holocaust engineered by Sky Net, it was something considerably more sinister than that. It was the takeover of the voting machines.

Australia and Venezuela are gone, we are told. The machines got them.

But lucky for us, the MyPillow, MyCoffee, MyAss man, Mike Lindell, is still around and he can tell the tale.

It’s too bad that Australia is gone. Our very own Michelle Mopsy Dale lives there or lived there. I wonder if Mike knows when they’re coming for Nevada? I was thinking that maybe Murfster and I could hide out in Area 51. The machines eff with me, I’ll take a flying saucer out of the hangar and chase them across the desert. They think Sarah Connor was something, they haven’t met Ursula.

Be afraid. Be very afraid. It's only the beginning

btw 2 for one special on pillows this weekend. pic.twitter.com/R3gUspzFFh

Oh wait. I like this better. Maybe Lindell means these machines.

A normal day in 54 countries, according to Mike Lindell. pic.twitter.com/uYqUhxX6Ye

Our world is being watched by intelligences greater than our own. And that emphatically does not include Mike Lindell.

Don’t forget, later on this month Lindell is having a big extravaganza in Springfield, Missouri. I plan to send Durrati down there for live coverage — that is, unless the machines get him first.

Guess I better pack a bag, pick up Teri and Murfster and head out to the Ale-E-Inn, the only place within a hundred miles of Area 51 where you can get a beer. Oh, and they have a mailbox. I’ll be blogging from there, from the mailbox.