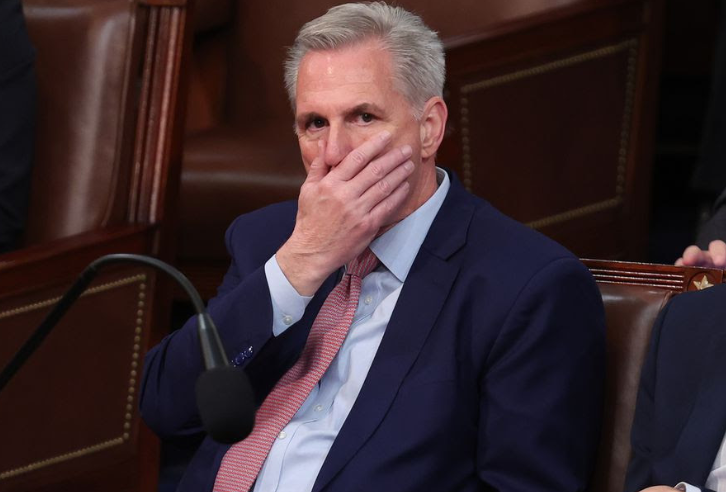 This is what happens when you’ve got clowns with flamethrowers running the House of Representatives and a Chief Bozo who doesn’t care what he has to promise to whom in order to gain power. Kevin McCarthy agreed to a great many things to get the Speaker’s gavel and one of them was to give the Fair Tax Act its first-ever floor vote. This bill would abolish the IRS, eliminate the tax code, and replace income taxes with a consumption tax. McCarthy’s 20 holdouts demanded this during Toyota time, which is how I think of the Speaker’s negotiations. You asked for it, you got it. McCarthy would have given these people a deed to the moon if they had thought to ask for it.

It’s a gimmicky idea that was pushed back in 1999 by talk-radio host Neal Boortz and Georgia politician John Linder. Then Mike Huckabee got hold of it in 2007. This was before he began writing revisionist history children’s books about how wonderful Donald Trump and Ron DeSantis are.

But the origins of the Fair Tax Act are actually the brainchild of Scientology. Seriously. The Wall Street Journal published this op/ed by Bruce Bartlett, a former deputy assistant secretary of the Treasury, back in 2007. It is filled with words like “legerdemain” and “deception.”

For those who never heard about it, the FairTax is a national retail sales tax that would replace the entire current federal tax system. It was originally devised by the Church of Scientology in the early 1990s as a way to get rid of the Internal Revenue Service, with which the church was then at war (at the time the IRS refused to recognize it as a legitimate religion). The Scientologists’ idea was that since almost all states have sales taxes, replacing federal taxes with the same sort of tax would allow them to collect the federal government’s revenue and thereby get rid of their hated enemy, the IRS.

Rep. John Linder (R., Ga.) and Sen. Saxby Chambliss (R., Ga.) have introduced legislation (H.R. 25/S. 1025) to implement the Fair Tax. They assert that a rate of 23% would be sufficient to replace federal individual and corporate income taxes as well as payroll and estate taxes. Mr. Linder’s Web site claims that U.S. gross domestic product will rise 10.5% the first year after enactment, exports will grow by 26%, and real investment spending will increase an astonishing 76%.

In reality, the FairTax rate is not 23%. Messrs. Linder and Chambliss get this figure by calculating the tax as if it were already incorporated into the price of goods and services. (This is known as the tax-inclusive rate.) Calculating it the conventional way that every other sales tax is calculated, with the tax on top of the price, yields a rate of 30%. (This is called the tax-exclusive rate.)

This is only the beginning of the deceptions in the FairTax. Under the Linder-Chambliss bill, the federal government would have to pay taxes to itself on all of its purchases of goods and services. Thus if the Defense Department buys a tank that now costs $1 million, the manufacturer would have to add the FairTax and send it to the Treasury Department. The tank would then cost the federal government $300,000 more than it does today, but its tax collection will also be $300,000 higher.

This legerdemain is done solely to make revenues under the FairTax seem larger than they really are, so that its supporters can claim that it is revenue-neutral. But for the government to afford to purchase the same goods and services, it would have to raise spending by the amount of the tax it pays to itself. The FairTax rate, however, is not high enough to finance the higher spending it imposes. Therefore the proposal only works if federal purchases are cut by 30%, close to $300 billion — the increased cost imposed by the FairTax.

Even at a cursory glance and without the benefit of a degree in economics, you can see that this is sheer madness — which probably will make this the newest right-wing talking point. It fits right in with the burn it all down theory of government these days.

And it gets worse. Much worse. The Bulwark:

Sound regressive? It is! But don’t worry, like any talk-radio proposal, there’s an equally wacky solution to the problems posed by the wacky tax proposal itself: the “prebate,” a monthly check mailed to taxpayers. The Fair Tax organizers frame it this way: “This gives every legal resident household an ‘advance refund’ at the beginning of each month so that purchases made up to the poverty level are tax-free. The prebate prevents an unfair burden on low-income families.”

I know what you’re thinking: Mailing hundreds of millions of checks twelve times a year sounds complicated. But don’t you worry, talk-radio listener, because the big brains behind the Fair Tax have got you covered. . . with a smart card. Per the most recent House version of the bill: “The Social Security Administration may provide rebates in the form of smart cards that carry cash balances in their memory for use in making purchases at retail establishments or by direct electronic deposit.”

Oh, good, the money can go out by electronic deposit. Whew. Who knew that getting rid of the IRS meant turning one annual tax return into twelve opportunities for the federal government to fall down while spraying the American people with a money hose? Cross your fingers!

Bruce Bartlett, the former Treasury official whose opinion you read in the Wall Street Journal excerpts above concluded:

“The FairTax is too good to be true, and voters should not take seriously any candidate who supports it.”

Indeed, nobody has ever taken the Fair Tax seriously.

Until Kevin McCarthy. Until now. Now there could actually be a floor vote on this talk show chicanery. And why not? It’s all performative art in lieu of legislation these days, right? Wedge this in amongst Jim Jordan railing and wailing about Hunter Biden’s laptop or the handful of classified documents in Joe Biden’s possession, which were returned the same day they were found. Why not?

It’s a lose-lose situation: Vote yes, and the House Republican Conference looks frivolous, to say nothing of the messaging gift they would give Democratic speechwriters in 2024 (“Republicans want to instate a 30-plus percent federal sales tax!”). Vote no, and invite primaries by far-right candidates who will accuse you of siding with Democrats when given a chance to abolish the IRS. There’s a reason Republicans have never brought any of the previous versions of the Fair Tax to a vote before.

But that was then, before there was a House Speaker desperate enough and crazed enough to agree to such a thing. McCarthy may break the promise, but the problem with that, is that he has no power amongst the people he ostensibly leads and for each promise he breaks they will make a promise amongst themselves to break him.