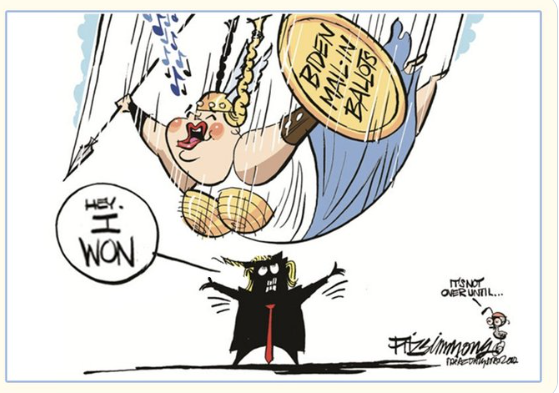 Arizona is, once again, the focal point of voting madness. Is it sunstroke? Something in the water? Or, it’s become Fascism, USA for other reasons? I mean, seriously, when the Maricopa County supervisor has to go into hiding, because the crazies are after him, something is going on.

Steve Bannon is demanding that the election be redone. Whether that’s to take place before he goes to the slammer to serve out his sentence or after, we know not. Kari Lake is completely on board for all of this. Whatever good she thinks it will do for her to make a spectacle out of herself like this, again, who knows?

And of course, it wouldn’t be a conspiracy theory without Mike Lindell on board. And he’s armed for CT bear. Here’s his latest.

Mike Lindell says he is about to “expose everything” with “cyber evidence” about how every election in AZ, PA, and MI was stolen. “They’re caught!” pic.twitter.com/8VosgLT0RK

He mentions “the Edison data” but still doesn’t tell us what it is. Last time he called it “the Edison Report” and I just had to take my best guess about WTF he was talking about, but that’s always the case with Mike, right?

The Edison Report is:

Okay, friends, take a vote. There it is. Do you suppose if I sent Lindell a copy of these options that he would grace us with a response?

And of course it gets worse. You know that all the Republicans who won their races are going to go along with this.

Mike Lindell says every Republican who won their election in 2022 should give up their win and agree to hold a new election with hand-counted paper ballots to help him prove the machines are rigged. pic.twitter.com/9Ymq6E4ztT

There have been precisely zero volunteers from the GOP who have answered Lindell’s call, at this hour. We will keep you updated, should that change. Don’t hold your breath.

Bear in mind the obvious: the last time there was a big kerfuffle over counting the vote in Maricopa County, it was very, very lucrative. Floor managers, who basically did nothing but watch bins of paper be rolled in and out, were getting paid $120 an hour. Nice work if you can get it.

Steve Bannon wants to get money rolling in. I guess that is Kari Lake’s goal as well, although she is apparently pretty well fixed. She was a television news anchor for 22 years, at an estimated salary of $83K a year. She must have saved some money, right?

With this crowd all that you can say is that the unknowns are stranger than the knowns.

But last election cycle, Trump was wailing like a stuck pig that his election had been stolen and the rubes were ready to cough up money. I don’t think that Lindell is going to find this Arizona recount as easy or lucrative as the Cyber Ninja lunacy was in Maricopa County two years ago. But we shall see.