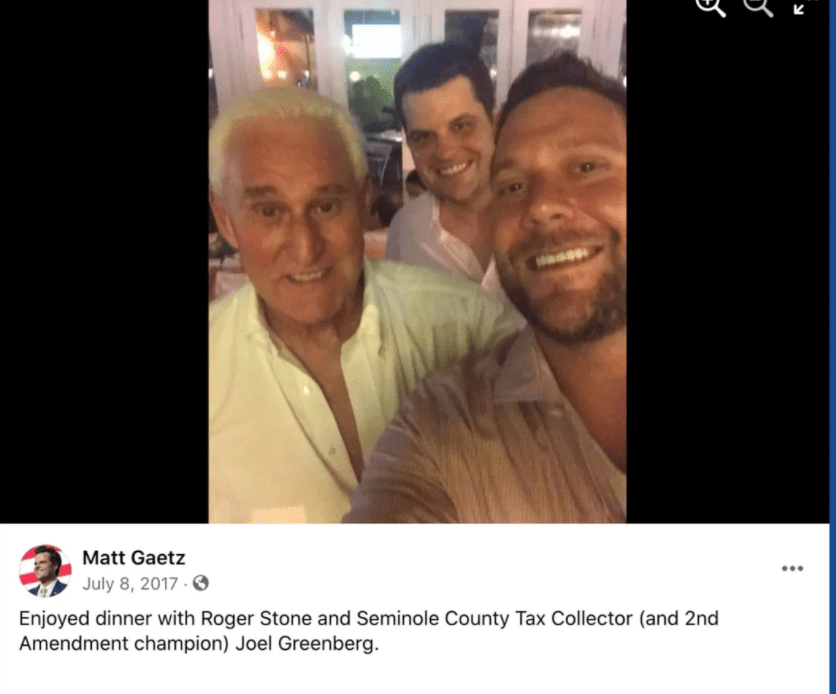 Roger Stone seems to be the Rome of Trump world, all roads lead to him, and if you want to do any kind of a deal, he’s the go to guy, apparently.  Joel Greenberg, Matt Gaetz’ buddy slash pimp, who currently faces a “sweeping 33-count indictment that ranges from stalking to sex trafficking” was angling for a pardon from Donald Trump — understandably — and he wrote a “confessional” letter to Stone, offering him a quarter of a million dollars in Bitcoin if he could get Trump to pardon him. Daily Beast:

In late 2020, Greenberg was out of jail and in communication with Stone. A series of private messages between the two—also recently obtained by The Daily Beast—shows a number of exchanges between Greenberg and Stone conducted over the encrypted messaging app Signal, with communications set to disappear. However, Greenberg appears to have taken screenshots of a number of their conversations.

“If I get you $250k in Bitcoin would that help or is this not a financial matter,” Greenberg wrote to Stone.

“I understand all of this and have taken it into consideration,” Stone replied. “I will know more in the next 24 hours I cannot push too hard because of the nonsense surrounding pardons.”

Apparently, Stone and Greenberg were quite the pen pals.

In those letters, Greenberg detailed his relationship with Gaetz. He confessed to paying young women for sex. And he claimed that he, Gaetz, and others had sex with a minor they believed to be 19 at the time. Greenberg said he learned she was underage on Sept. 4, 2017 from “an anonymous tip” and quickly contacted Gaetz.

“Immediately I called the congressman and warned him to stay clear of this person and informed him she was underage,” Greenberg wrote. “He was equally shocked and disturbed by this revelation.”

Greenberg continued in the handwritten draft that he “confronted” the then-17-year-old and explained to her “how serious of a situation this was, how many people she put in danger.”

“She apologized and recognized that by lying about her age, she endangered many people,” he continued. “There was no further contact with this individual until after her 18th birthday.”

But after she reached the age of legal consent in Florida, Greenberg reestablished contact. As The Daily Beast previously reported, about five months after her 18th birthday, Gaetz sent Greenberg $900 in two Venmo transactions—one titled “Test” and the other titled “hit up ___.” The blank, however, was a nickname for this girl, and Greenberg paid her and two other women a total of $900 about six hours later.

In his confession letter, Greenberg also admitted he facilitated Gaetz’s interaction with college students—and paid them on his behalf.

What I find comical here, is the fact that the girl’s underage status was an issue only insofar as a legal technicality was concerned. There is no genuine OMG moment, where Greenberg recognizes things are out of control, and perhaps this isn’t right to be paying underage girls to have sex with a congressman and other high rollers. Au contraire, the minute that the 17-year-old became an 18-year-old, she was back on the payroll. The Daily Beast is reporting that they’ve talked to 40 women “and they all said they understood Greenberg was paying them at least in part for sex.” Greenberg had characterized the payments made as “gas money” and maybe that means gas money for a jet plane, because the payments were in the neighborhood of $300 to $500 or even $1,000.

Now Matt Gaetz is attempting to wiggle out of this by disparaging Greenberg. What else is he going to do? This is what his PR firm has to say.

“Congressman Gaetz has never paid for sex nor has he had sex with a 17 year old as an adult. We are now one month after your outlet and others first reported such lies, and no one has gone on record to directly accuse him of either. Politico, however, has reported Mr. Greenberg threatening to make false accusations against others, which seems noteworthy for your story and in fact sounds like the entirety of your story. Congressman Gaetz has had no role in advocating for or against a pardon for Greenberg and doubts such a pardon was ever even considered.”

The Politico article does not say Greenberg was threatening to make false accusations against others, but does say that an associate claimed Greenberg had warned friends that “everyone is going to need a lawyer.”

Roger Stone had Greenberg commit all this to writing and told him to emphasize how loyal he is to Trump. And of course Gaetz is loyal to Trump. He’s gone on record saying that no matter what he was doing, “even in the throes of passion” he would take a call from Trump. This is the central tenet of the Cult of Trump, Thou Shalt Exalt Citrus Caligula above all others.

The messages show that in November, the pair discussed putting together a “document,” which later took the form of a confession letter and background missive about all the ways in which Greenberg had been loyal to Trump. In their early conversations, Greenberg told Stone that the letter was “about 8-10 pages” and asked if it should be shortened.

“No,” Stone replied, “use as much space as you need to tell the story fully but be certain to include your leader ship [sic] for Trump prominently.”

Greenberg almost immediately responded that he had “killed” himself for Trump. “And I’ve killed my self [sic] for Matt,” he said.

On Nov. 20, 2020, Stone told Greenberg he had received “the document” and would show it to the team that “got me my commutation.”

“I will review it with them and give you a budget. This is very doable and the time is now,” Stone wrote.

An update from Stone came just after midnight on Dec. 8: “Your thing is being looked at and I will have an answer by Saturday as to whether you have a viable shot for justice and how to go about it.” […]

This is treacherous territory with a lot of different players such as Jared and Giuliani playing a hand,” Stone wrote, presumably referring to Trump adviser Jared Kushner and the president’s personal lawyer, Rudy Giuliani. “I have two things I’m trying to get done. Sit tight.”

Now this last comment is particularly interesting due to timing, because Michael Cohen has intimidated, in light of the recent raid on Giuliani, that Jared Kushner might be implicated in who knows what, when Giuliani decides to flip on Trump, something which Cohen views as inevitable. However that sentence about Giuliani and Kushner might have read three or four months ago, it reads differently today.

“You think MG is going to come visit me in prison?” he said, then proposed the $250,000 Bitcoin deposit.

Stone replied that he … “cannot push too hard because of the nonsense surrounding pardons.”

As Trump neared his final days in office, he signaled an intent to issue a wave of pardons. Stone communicated with Greenberg for months about his efforts to navigate the heavy traffic of pardon-seekers. Reports at the time suggested legal reprieve could be had for the right price.

What developed next is that Gaetz himself apparently decided against Trump pardoning Greenberg, despite the best laid plans of Roger Stone.

What I don’t understand is why MJ would not help me at all and actually told me not to help you which I tried to do anyway. In the end it would not have mattered. Cipollone killed everything we wanted to get done and that includes stuff MG wanted,” Stone wrote, immediately clarifying that “MJ” was a typo and that he meant “MG.”

“Ok. He actually said not to help me? Wow,” Greenberg replied.

“If you repeat it you’re really going to hurt me,” Stone warned.

Now, of course, Stone is disavowing all knowledge of this particular mission impossible and cautioning the Daily Beast that they better be careful or he’ll sue.

“Urge you to be very careful,” Stone said at the end of his text. “I will take any appropriate legal action in the event that you publish anything that is false or defamatory. Sounds to me like you have been presented some kind of cut and paste record.”