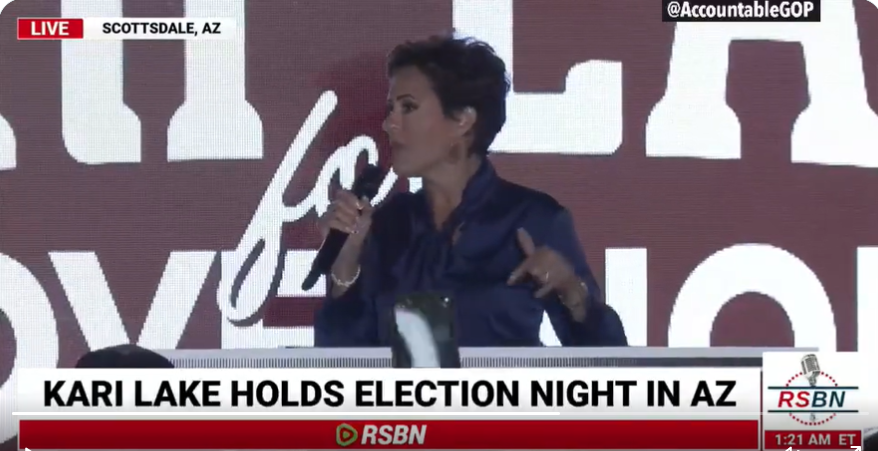 I have assumed that Kari Lake is a grifter, but now I’m beginning to wonder if she’s mentally ill. There is something dark and deranged about the very short clip you’re about to see.

Over half the votes in Maricopa County have been counted and she’s trailing badly. Yet she claims that there is “no path to victory” — for her opponent?!?

Hoe kay. Here’s some deja vu for you.

While trailing in her GOP primary race, Kari Lake says: "We won this race period." pic.twitter.com/1bz33lUYq3

I’ve listened to it four times, because the hubris is difficult for me to contend with. Wow.

I guess we’ll find out what the Big Plan is. I’m assuming that if enough MAGA candidates lose and tell the Big Lie, it’s because there is some overarching plan.

I guess Lake must believe that she will stay in politics as the face of MAGA, maybe Ron DeSantis will want to put her on the ticket. I am shotgunning here. I have no idea. I didn’t expect her to get this weird, this soon.

Listen to this. Incredible.

Kari Lake has been contending for weeks now their is fraud & irregularities in her *primary* election — yet, below, she’s unable to offer a single specific allegation & refuses to answer why she wouldn’t take such intel to authorities. https://t.co/wxi4z0X2Ha

She knows all about the crime but she’s not going to tell.

Kari Lake claims victory in Arizona: "We are going to win this." pic.twitter.com/lcSqKD88eX

If there is method in this madness, it has not made itself apparent yet.