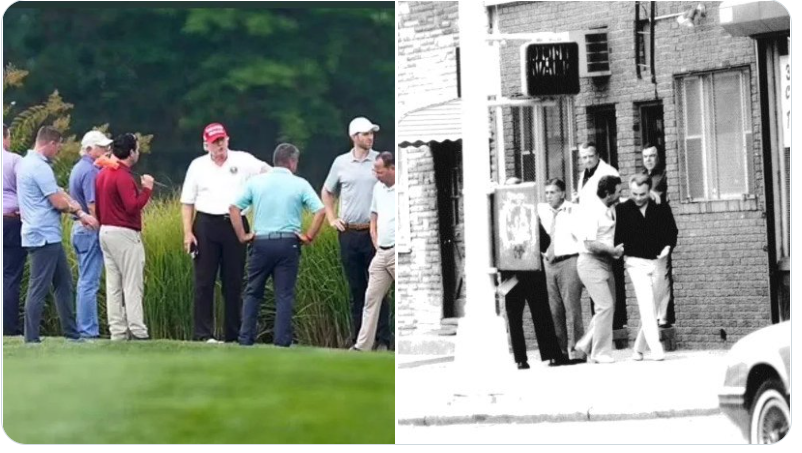 It’s time once again to play Connect the Dots and today it’s actually pretty easy to do. It’s like if the game was Make the Sandwich and when you walked into the kitchen the meat and cheese was on bread on the left side of the cutting board and the lettuce and tomato was on bread on the right and all you had to do was slap ’em together. Voila, sandwich.

This requires the same amount of no brainer effort. First we have the intriguing entrance into D.C. last night of Donald Trump. This was made more intriguing by the fact that he had his golf shoes on. Nobody wears golf shoes as street shoes because you will destroy the spikes on the shoes by wearing them on pavement. Yet Trump did that. He must have been in a terrific hurry if he didn’t have time to change into his loafers with the lifts.

Then this morning he was seen in his golf cart at his club in Sterling, Virginia. He also was photographed talking with his cronies and not playing golf. This was a meeting today, not a golf game. Sterling was rainy.

So what's all this about? Only place to have a private conversation without a chance of anyone listening in? What were they talking about? And why these people? Many many questions, but no golf for sure! #TrumpinDC #TrumpIsInDC pic.twitter.com/wwaJK1zmYs

This was a mob summit. All Trump needs is Carmela to make some lasagna and he’s Tony Soprano.

Could it be related to this story in the New York Times?

WASHINGTON — The Justice Department has issued about 40 subpoenas over the past week seeking information about the actions of former President Donald J. Trump and his associates related to the 2020 election and the Jan. 6, 2021, attack on the Capitol, according to people familiar with the situation.

Those receiving the subpoenas included Dan Scavino, Mr. Trump’s former social media director who rose from working at a Trump-owned golf course to one of his most loyal aides and has remained an adviser since Mr. Trump left office. Stanley Woodward, one of Mr. Scavino’s lawyers, declined to comment.

The Justice Department also executed search warrants to seize electronic devices from people involved in the so-called fake electors effort in swing states, including Mr. Epshteyn, a longtime Trump adviser, and Mr. Roman, a campaign strategist, according to people familiar with the events. Federal agents made the seizures last week, the people said. […]

Bernard Kerik, a former New York City police commissioner who promoted baseless claims of voter fraud alongside his friend Rudolph W. Giuliani, was issued a subpoena by prosecutors with the U.S. attorney’s office in Washington, his lawyer, Timothy Parlatore, said on Monday. Mr. Parlatore said his client had initially offered to grant an interview voluntarily.

Like the sandwich in the kitchen, all the ingredients are coming together at the same time. It’s not just the slate of fake electors. It’s that, plus the “election integrity” fundraising PAC — you remember Trump hit the roof the other day when the Lincoln Project put out an ad on that subject, threatening to sue — plus the riot at the Capitol. It’s all layered together, parts of one dish.

Bon appetite, Donald. You’re going to need plenty of kool-aide to wash this one down.