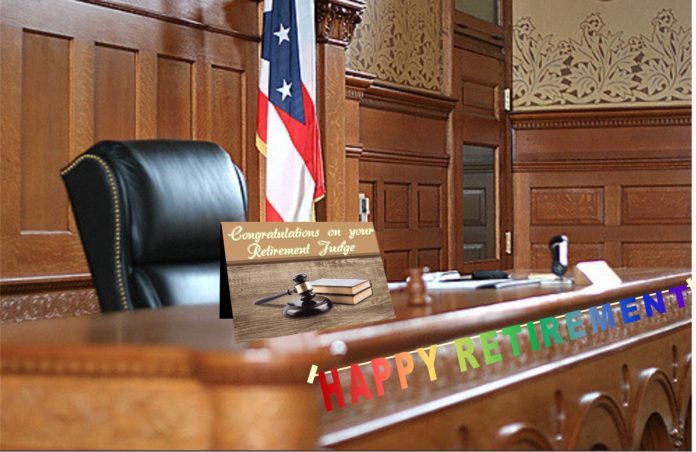 After Joe Biden’s election win, eight federal judges announced their intention to retire or semi retire into senior positions in 2021, opening up new court vacancies for the newly-elected President to fill. These were the ones who couldn’t wait for Joe Biden to be sworn in before making their announcements.

That must have irked McConnell whose primary focus had been to ram through as many judicial appointments as he could; more than 230 of them in a single term, including three to the US Supreme Court.

But these eight judges were clearly waiting until the Trump Error came to an end and the Biden Era began. Not that judges necessarily consider the party of the current President when they choose their retirement date; it’s more often a very personal decision. However, University of Richmond Law Professor, Carl Tobias, an expert on judicial nominations, notes it can be a strong motivating factor.

“I think this is less of a custom than for a Supreme Court nominee, where justices really do try to time their departures so the opposite party doesn’t get to replace them,” said Professor Tobias.

He then goes on to explain how the Trump factor is creating an exception to the general rule.

“Still, I think Trump skews perspective here,” he continued. “I think that Trump was so nasty to federal judges and so counter to the rule of law that he repelled many federal judges. I think for strong Democrats in particular, I could see judges saying, ‘No, I’m not going to let him replace me.’”

Eight retirements in the space of two and a half months may not seem much on which to base a trend. But, as it’s turning out, this was the trickle before Inauguration Day marked the turning of the spigot to full flow.

U.S. District Judge Victoria Roberts wasted no time in penning her retirement letter which was promptly delivered to the White House just 90 minutes after Joe Biden was sworn in. 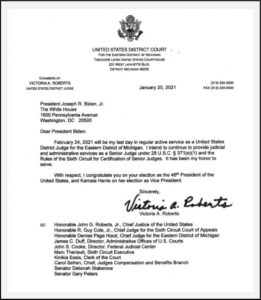 Within seven days, seven federal judges with lifetime appointments announced their decisions to retire or semi-retire, five confirmed by the Administrative Office of the U.S. Courts with two others yet to be recorded on their website, and more waiting in the queue.

That they were waiting for Joe Biden to take office is evident both from their timing and their words. In his letter received by the White House the day after Inauguration, U.S. District Judge William Alsup wrote, “Congratulations on becoming our new president. I feel it is time now for me to ‘go senior.’” There’s clearly the desire expressed here that President Biden be the one who chooses his successor.

It isn’t just Democratic-appointed judges either. While eight of the retirees were appointed by Bill Clinton and two by Barack Obama, another five were George W Bush nominees. The one thing they all have in common is that they didn’t want Trump nominating some unqualified nutjob as their replacement.

Unlike Trump’s white, male, right-wing ideologues, President Biden will infuse far more diversity into the courts, just as we are seeing him do with his Cabinet picks. Already the country is a better place.