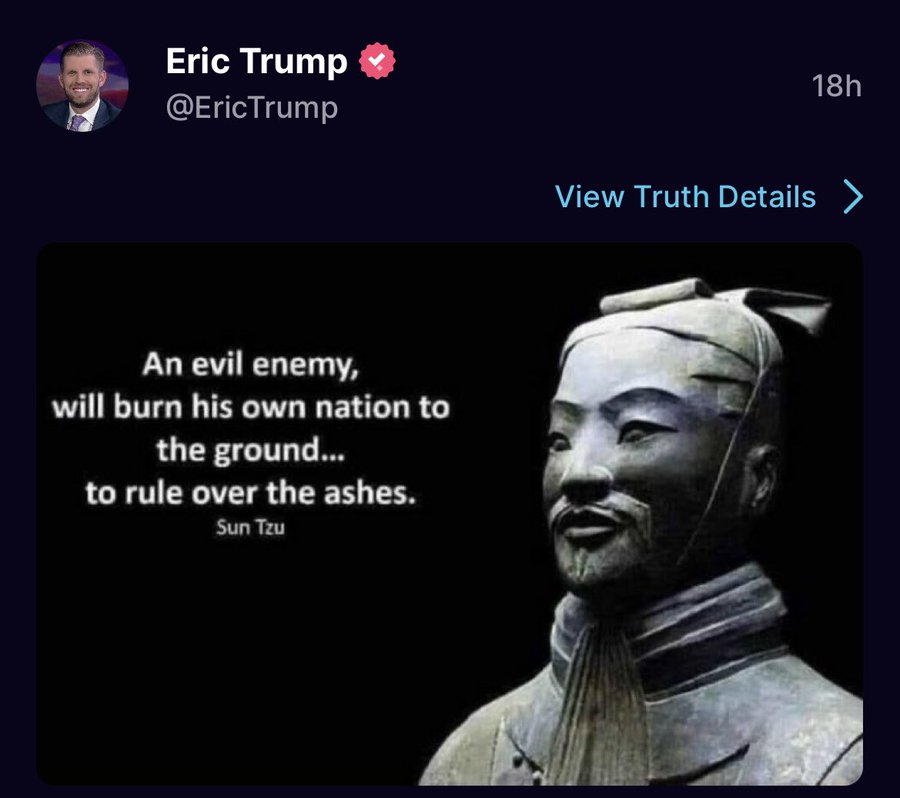 You could not make up a character like Eric Trump, posting something like this and being oblivious to how it will be received, in a story of fiction. It would be judged as implausible, that anybody could be so stupid and unaware.

Stonekettle has grasped the essence of Erik here. He was speaking with respect to Kayleigh McEnany and one of her bon mots but the principle applies here as well.

No more self-awareness than a dog licking its own asshole in the middle of a public sidewalk. https://t.co/lATS0UdyaW

That is about the size of it. We presume that Erik was taking a shot at Joe Biden. He just doesn’t get that any normal minded person is going to read that tweet, or “truth” excuse me, as talking about Trump and January 6.

We don’t know where Erik got the quote, but he didn’t get it from reading Sun Tzu, anymore than brother Don Junior ever read “1984.” It’s a fake quote, one of many going the rounds, evidently.

and, that is not even a real quote from Sun Tzu. pic.twitter.com/asMJyYoBsr

I prefer this when talking about Ultra MAGAs… pic.twitter.com/lZOxD6HDHw

My guess is that Erik got the quote out of a fortune cookie. That is his intellectual and cultural speed.

I don’t know who I’m quoting by saying that every accusation is a confession, but that’s the takeaway here.