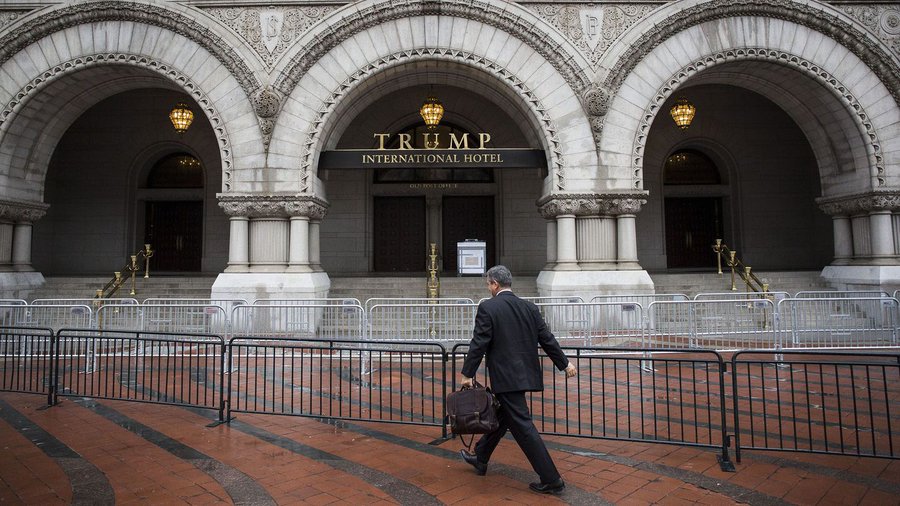 History is probably getting a cramped hand recording all the failures of Donald Trump in his personal business affairs, not to mention the whopper he pulled in his 70’s of getting elected POTUS and botching that all to hell and back. Be that as it may, the latest failure bearing the Trump name in golden letters is the Washington, D.C. Trump hotel, located down the street from the White House. The ink is drying on the contract and the good news is that this is yet one more piece of Trump that the nation’s capitol can put in the rear view mirror. Good riddance to bad rubbish. New York Times:

The Trump International Hotel in Washington is now officially out of business after the Trump family on Wednesday completed its sale to a Miami investor group, which plans to reopen it as a Waldorf Astoria.

The sale formally ended the Trump family’s business presence in Washington, although the family company still owns a golf course in Northern Virginia. The deal with the investor group, CGI Merchant Group, for a reported price of $375 million covers only the operation of the hotel, which is housed in a building leased from the federal government.

Hotel industry executives have said the hotel underperformed compared with other luxury hotels in the city, particularly since President Donald J. Trump left office, in part because some companies and travelers were reluctant to book rooms or hold events at the hotel given the controversies surrounding Mr. Trump. Those factors most likely contributed to the decision to sell the lease, they said.

And the hotel died a slow death. The BLT Prime restaurant closed down and this will disappoint you, Ivanka’s Spa closed down. Yes. Try not to slash your wrists, I know what a disappointment it must be. Maybe we’ll convene a support group here for Zoomers who wanted to go to Ivanka’s spa and couldn’t, or were denied the chance to insanely overspend on cold French fries with beef jerky in the bar.

Speaking of which, the bar of the Trump Hotel became iconic for sheer ridiculousness back in 2016, when God Is Not Dead, 2 was playing on the bar television screens, seriously, and white-gloved sommoliers were selling spoonfuls of exotic wine for $25 a spoon. You can’t make this stuff up. That’s all gone dark now.

And the hotel had a rip roaring day the day that Trump held a press conference where he was supposed to discourse on what was then his biggest lie, the birther conspiracy involving Barack Obama. Trump essentially stiffed the crowd of journalists by stating that Obama was “born in Hawaii” and then walked out.

Members of the press were livid and in some kind of a kinesthetic moment of fury worthy of Stephen King, the stage behind where Trump had spoken collapsed. Pool producers were angry, and Dana Milbank of the Washington Post went upstairs and took a bubble bath and drank champagne. Post photographers photographed this because they had nothing else to photograph and nobody else to interview. Other reporters and staffers bounced on the beds in the hotel rooms and ate the mints laid out on the pillows.

It was all a wash, and it was a foreshadowing of Trump’s entire presidency and post-presidency to come. A complete and total farce, from start to end.

If that hotel’s walls could talk…..

Hopefully, somebody will think to burn a lot of sage and hiring an exorcist might not be a bad move, either.