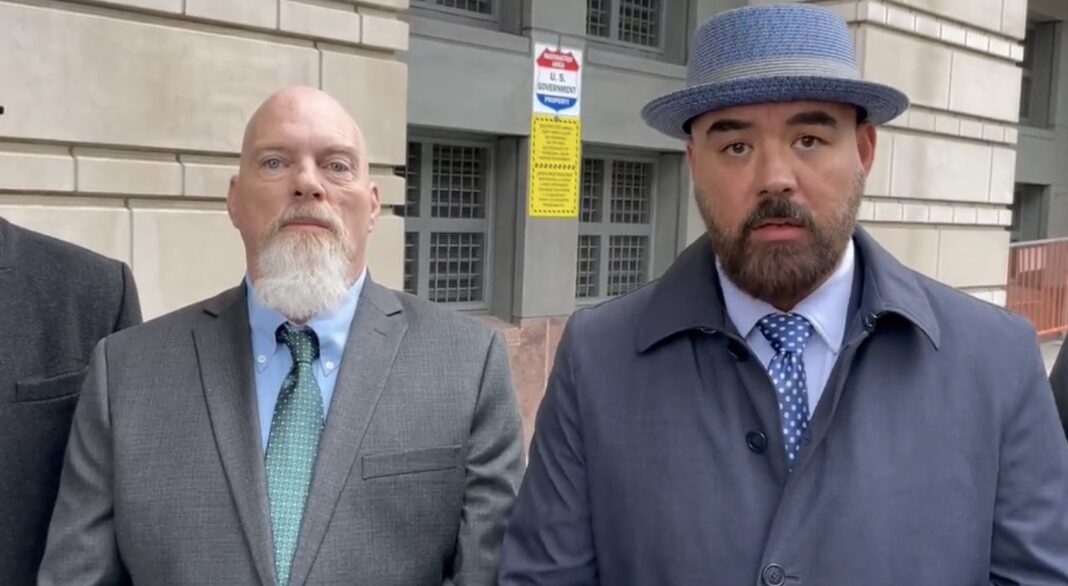 Richard “Bigo” Barnett, the unrepentant shitbird who invaded Nancy Pelosi’s office on January 6, 2021, propping up his size 11 Timberlands on her desk and leaving her a whole quarter for the stationary he stole, is upset that he was tried in D.C., where his crime was committed, and after being convicted on the counts listed below had his lawyer, in his stupid little blue straw porkpie hat, complain that he was not convicted by a jury of his peers, who would, I guess be other Arkansas MAGAs…

“A jury on Monday convicted an Arkansas man who became infamous for propping up his feet on the desk of a staffer of then-House Speaker Nancy Pelosi during the insurrection at the U.S. Capitol on Jan. 6, 2021…

Of the eight charges Barnett faced, the most serious were felony counts of civil disorder and obstruction of an official proceeding. He was also charged with entering and remaining in a restricted building or grounds with deadly or dangerous weapons –a stun gun with spikes concealed within a collapsible walking stick.

He was convicted on each count…

I probably shouldn’t have put my feet on the desk,” Barnett told the D.C. jury“.

You're guilty. Done. Next time commit a crime in your mother's basement and you might get a more sympathetic jury.

So he wants a jury of inbred sister lovers? Is that what he's saying? Because DC citizens voted for Biden instead of a traitor? And nice hat dude. Not.

I'm 100% certain the defense trump will use if convicted is that it isn't legitimate because it's impossible to find a jury of his peers, because he has none

They were projecting SO HARD when labeling “the left” “snowflakes”.

Lol, so his lawyer understand the law about as well as Bigo does.

Hey, Bigo, maybe they will lock you up with your peers.

But I don’t know if the D.C. Zoo would subject their Chimps to your company…