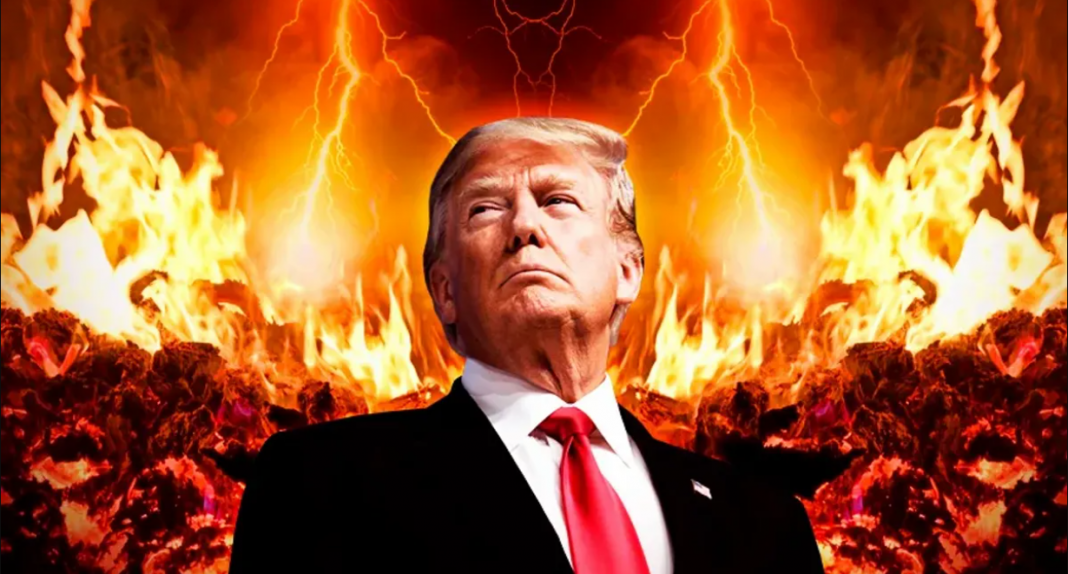 “We come here not to praise Caesar but to bury him.” — Shakespeare

Mo Brooks was not the messenger to carry the idea of getting beyond 2020. He just got killed for it yesterday. Fox News has already decided that Ron DeSantis has inherited the GOP mantle and if you need evidence of that, look no farther than the fact that they carried coverage of the last two January 6 Hearings. Donald Trump is gone, the powers that be have spoken.

Now along comes this op/ed in the Washington Times penned by birther Jerome Corsi officially putting Trump out to pasture, but here’s the kicker: he’s elevating Mike Pence into the role of MAGA/GOP head of state and this is possibly the most hilarious example of unintentional humor that I have ever read in my life.

For openers, Mike Pence is currently reprising the Bruce Willis role in the Sixth Sense. He’s dead and has been for some time, only he doesn’t know it. I guess we better get some psychic kid to tell him, because his enablers clearly will not.

Corsi’s piece is in the Moonie-owned Washington Times (we can only presume that the Wall Street Journal and even the New York Post laughed in his face, maybe the Washington Examiner as well) telling Donald Trump, in essence, that he is through.

God, I hope Trump sees this. I hope Roger Stone, Corsi’s pal, shows it to him, because he will go screaming banana bonkers. Here are excerpts.

Former President Donald Trump’s embrace of American exceptionalism has brought forth upon this nation a patriotic rebirth of our founding principles that he will only diminish should he persist in his evident determination to run for reelection in 2024.

Today we are engaged in a great and perhaps ultimate spiritual battle challenging the future of the Judeo-Christian principles so dear to our Founders. As John Adams warned, “Our Constitution was made only for a moral and religious people. It is wholly inadequate to the government of any other.”  […]

Perhaps Mr. Trump’s most enduring contribution will be that he radicalized a university-indoctrinated Neo-Marxist minority into public view. These radical extremists have launched a carefully crafted, well-financed and highly successful Maoist cultural revolution of political correctness. Do we want to surrender our freedoms to take a godless leap into a dark, schizophrenic nightmare in which a concept as fundamental to human existence as gender is ruled indeterminate by a post-modernist Democratic Party-inspired mob?

A Trump presidential candidacy in 2024 will only bring forth once again the howling demons that tarnished the 2020 presidential election with their “Never Trump” resistance movement.

You see the set up here for Man of God Mike Pence to be endorsed. Corsi goes on to proclaim the glad tidings that Pence is a man “born for a time such as this” quoting Ester:4:14. I wonder how many people live in this gaslit fantasy world where Mike Pence is a viable candidate for the GOP nomination in 2024? So far we know there’s Pence and Corsi. Is even Karen, Mother Pence, stupid enough to go along with this? I guess she must be. Corsi blathers on with his advice to Donald and instructions on how to become an elder statesman. I can think of no greater waste of time.

My continuing support of Mr. Trump should also not be in doubt. In 2018 and 2019, the corrupt Mueller investigation threatened to imprison me for my active involvement in supporting Mr. Trump’s 2016 presidential campaign. To avoid another time when the “fire kindled in God’s anger” burns upon us (Jeremiah 15:14), I would respectfully suggest Mr. Trump consider how Teddy Roosevelt and Winston Churchill managed their political careers in their senior years.

Motivated by his incessant ambition, Roosevelt’s decision to run as president in 1912 on a third-party ticket arguably put the Hegel-inspired Woodrow Wilson in the White House, the first Democrat to win a presidential election since the election of Grover Cleveland in 1892.  In July 1945, after losing the general election to the Labour Party, Winston Churchill enhanced his reputation as a statesman, highlighted by his famous “Iron Curtain” speech at Westminster College in Fulton, Missouri, on March 5, 1946.

The MAGA movement has not yet forgiven Mr. Pence for certifying the 2020 election in favor of Mr. Biden. But the actual failure was Mr. Trump’s inability to drain the swamp as promised. Even the Supreme Court, with three Trump-nominated judges, failed to intervene in the 2020 federal election controversy. Before the joint meeting of Congress on Jan. 6, 2021, legal counsel had advised Mr. Pence that holding up the certification of the presidential election would violate federal law.

Corsi just signed his death certificate in the paragraph above, with the words, “The actual failure was Mr. Trump’s.” That’s oblivion time. That’s when you get thrown out the airlock to explode in the cold stretches of space surrounding MAGA world.

Given his experience in state and federal government positions, Mr. Pence is uniquely qualified to champion as president the grassroots voter integrity movement needed to assure the nation’s future retains the destiny of freedom our Founders intended.

“The grassroots voter integrity movement. Championed by a dead man. This ought to be something. Does Corsi have a running mate picked out for Pence, I wonder? Since we’re dealing with dead people, how about Rudy Giuliani? Although the reality would probably be something along the lines of Kristi Noem.