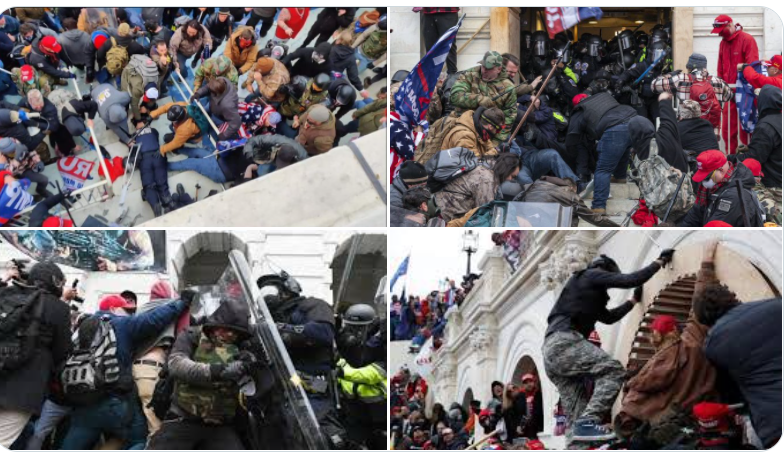 It sure didn’t take long for this to blow sky high. In the past 18 hours or so we saw the draft of the resolution to censure Congressmembers Liz Cheney and Adam Kinzinger. The language of it was alarming in the extreme. The January 6 Committee was accused of “persecuting” “ordinary citizens engaged in legitimate political discourse.” Smashing windows, tazing and clubbing officers of the law and defecating on the marble floors of the Capitol is now legitimate political discourse, can you dig it? At least according to Mitt Romney’s niece.

If you read our piece here earlier, which quoted the New York Times and then went to commentary by conservative writers Charlie Sykes and Michael Gerson, who were both horrified by the language of the censure, the censure vote was vastly beyond that. It wasn’t just a slap on the wrist to two Republicans, it represented an entire paradigmatic policy shift from where the RNC stood on January 6, condemning the Capitol riot, to condemning the January 6 Committee, and embracing the riot.

A short while later Mike Pence told the Federalist Society that he didn’t have the power to overturn the election and he received warm applause — very nice for a guy who’s used to being booed by MAGAs.

Then, within a few hours of the censure vote and publication of the New York Times story, which included a quote by Mitt Romney disparaging the proceedings, Ronna McDaniel went bananas and tweeted this.

This story from the New York Times is completely false.

I have repeatedly condemned violence on both sides of the aisle. Unfortunately, this committee has gone well beyond the scope of the events of that day.

She has “repeatedly condemned violence on both sides of the aisle.” Umm…excuse me? How many Democrats were found wearing fur and horns and making caa caa on the floor that day?

And let’s get to the substance of her allegations against the New York Times. How is it completely false? It directly quotes the language of the resolution.

Here’s a look at “Democrat-led persecution” for your convenient reference.

.@GOPChairwoman is discussing, among others, Kathy Berden, whose conduct wrt the fraudulent elector slates is under criminal investigation.

Ronna said she pursued this censure vote because her nice little old lady friend who tried to invalidate my vote and the votes of 2.8M other Michiganders got a subpoena. Put the violence aside. This is about stealing 2.8M votes.https://t.co/1db8CmHbK7 https://t.co/XOHnRhni7H

Let’s use Occam’s Razor for just a few seconds here. This is as simple as it is: David Bossie put one over on Ronna. She is too stupid and the meshes of her mind too coarse to have fully grasped exactly what the import of Bossie’s resolution was. She thought everything was fine once “expulsion” was changed to “censure.”

McDaniel is to the manor born. That’s the only reason she’s got the job she’s got. If these were times when the RNC chair was a simple sinecure position, McDaniel would be doing fine. It’s not. The RNC needs real leadership because the Republican party is in massive trouble

I think McDaniel will be tendering her resignation within the month. What say you?