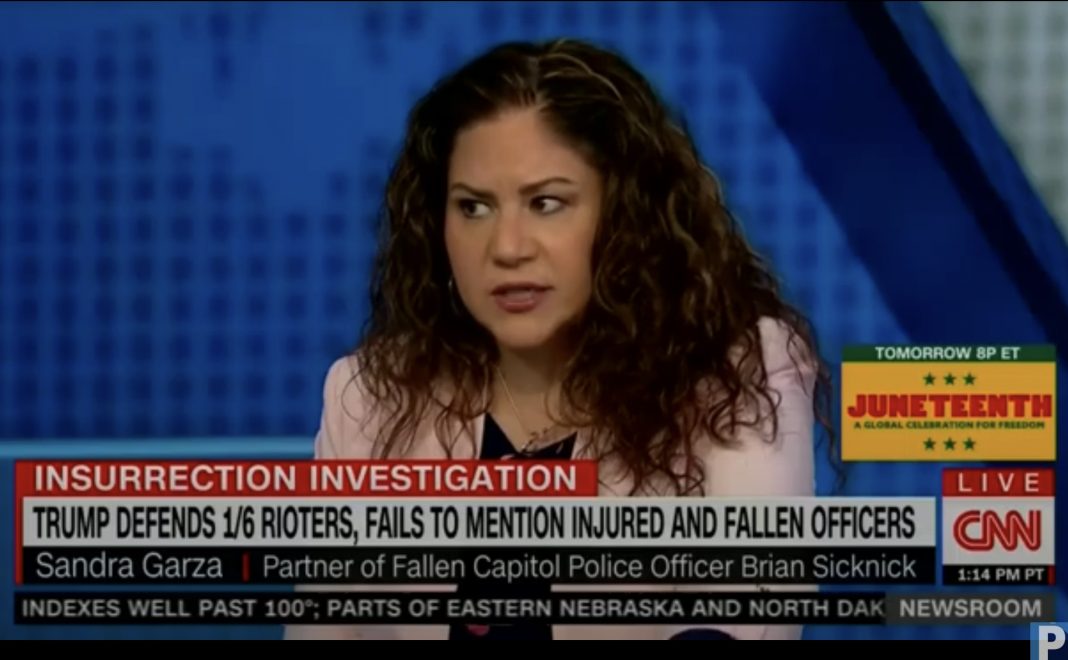 Sandra Garza was the partner of Capitol Hill Police Officer Brian Sicknick who, after what was described as “hours” of physical struggle with the Trumpian thugs unleashed against the Capitol on Jan. 6, 2021 in the J6 Committee Hearing testimony of the officer who fought alongside him, Caroline Edwards, collapsed on the scene of the riot that evening… after all the human trash had been swept away.

Brian died the next day at the hospital of two strokes caused by a blood clot in the basilar artery near his brain stem. There was a lot of misinformation about his death in the days following including reporting that he had been hit in the head with a fire extinguisher. The medical examiner who conducted Brian’s autopsy stated in his report that he found no evidence of such an injury, although he did note that “all that transpired played a role in his condition.”

So, for the sake of brevity, I’ma just gonna say that Trump’s mob killed him.

Brian’s partner, Ms. Garza, has pretty much reached that same conclusion, and when she heard that Hitler-lite was floating the idea of pardoning his shitzkrieg storm-troopers at his bund rallies, she found her way to the CNN Newsroom, where she unleashed a little lightening war of her own…

“And what really makes me angry, Jim, is that he’s safe in his white castle with Secret Service protecting him, and he’s running his mouth in the safety of his home where he lives and all his family members, and all the enablers, his favorite people in Congress are safe in their little white castles, while the rest of us are, you know, living without security. And the staffers, the people who cleaned up the savagery of that day — the people who defecated in the Capitol, who urinated in the Capitol — they should have cleaned that stuff up, you know. That really makes me angry because, like I said, the next time something happens we’re going to have a far worse outcome than we did on January 6th.“

Sandra Garza understands what is at stake in the coming months, perhaps better than than our elected officials and their appointees…

“Pardoning the rioters would be disastrous, she said, “because these people are going to end up doing something worse the next time and we’re going to have a lot more bloodshed.”

Amen, Sandra. And thank you for keeping your cool… although everyone watching could see the three-alarm fire raging behind your eyes.

I don’t think I could have gotten through that interview, had I lost a partner due to Trump’s disgusting and homicidal behavior, without shouting at least one fucking expletive.