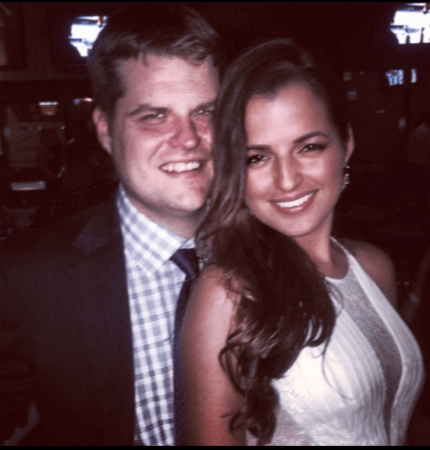 It’s time to play Connect the Dots. Let me put out the disclaimer up front, we don’t do conspiracy theory here, but reasonable inference from proven facts is something else altogether. That’s called conjecture.

Let’s start with the known fact that almost a year ago, June of 2020, Matt Gaetz revealed to the world that he had an adopted son.

For all those wondering, this is my son Nestor. We share no blood but he is my life. He came from Cuba (legally, of course) six years ago and lives with me in Florida.

I am so proud of him and raising him has been the best, most rewarding thing I’ve done in my life. pic.twitter.com/JB96wzOzYU

So Gaetz adopted Nestor in 2014. At the time of this revelation, Roll Call reported that people who compiled data on congresspeople didn’t know anything about this and not for lack of asking.

Data compiled by CQ Roll Call — and previously confirmed by Gaetz’s office — did not list the congressman as having any children during his two terms so far in Congress or as a House candidate. As recently as July 2019, CQ Roll Call conducted biographical data checks, and Gaetz’s staff did not disclose Nestor Galban as his son when they were asked to confirm basic biographical information. Instead, his office confirmed that Gaetz was single with no children.

Erin Gaetz, the congressman’s sister and founder of social media production company Southpaw, tweeted a number of photos of Galban on Thursday with the congressman and the Gaetz family. She also addressed the adoption, tweeting that Gaetz had adopted Galban when he was 12 years old: “He didn’t speak English, but luckily, Matt speaks Spanish.”

Well, did he adopt him or didn’t he? People Magazine ran a story the same day as Roll Call:

Geatz did not formally adopt Nestor (and he declines to discuss Nestor’s relationship with his biological family now). He re-frames the matter, saying, “Our relationship as a family is defined by our love for each other, not by any paperwork.”

Nestor, he says, “is my son in every conceivable way, and I can’t imagine loving him any more if he was my own flesh and blood.” Recalling those early days with Nestor — including a scene he paints of the two playing catch not long after the boy arrived to the U.S. — Gaetz warns that he might start to choke up.

Gaetz met Nestor when he was dating Nestor’s older sister, he says. Here’s where the plot thickens. Nestor’s sister is May Mendez. And she has seen fit to amend that to May Mendez Gaetz, at least on Instagram.

Notice anything interesting about the @ at the top of this? pic.twitter.com/dGqXdQHLZ9

And Gaetz parents have been ridiculously generous to May. Do wealthy people give their son’s girlfriends lavish gifts like this? Anybody know? This is not a league that I bat in. 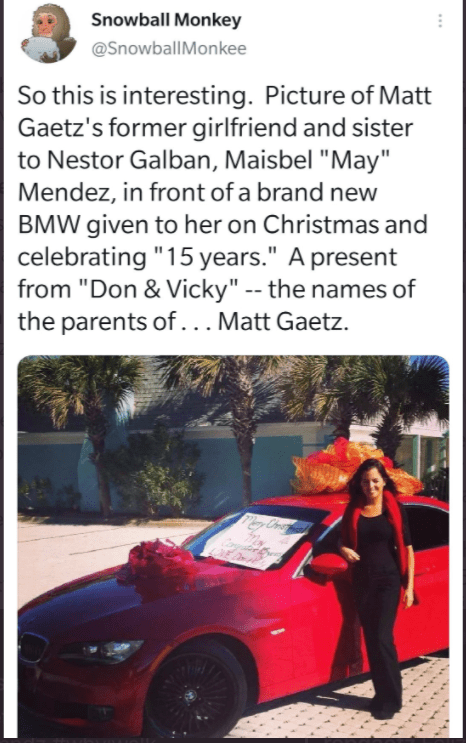 Not his adopted son. His biological son. Whom he engendered when he was 19… and when Nestor’s mother was 13. pic.twitter.com/5EJ4k30xNh

Who knows? Maybe The Shadow does. But even if you decide that all this is vicious slander, it is interesting that Matt Gaetz identifies Nestor as “his life” and “chokes up” at thoughts of them playing catch — but he hid the existence of his son for years and reported himself as single, no children.

And it’s intriguing that Gaetz’ relationship with May has gone on for so many years. Very few people date for fifteen years. And maybe Gaetz’ parents thought it was such a remarkable thing that they decided to memorialize it with a lavish gift of a luxury sports car? Or, maybe they gave May the car to keep her happy so she would keep her mouth shut. I’m a cynic, so I subscribe to the latter theory.

It would probably be futile to ask for a DNA test of pater and adopted fis, but that would certainly solve the issue and still all the wagging tongues.

Maybe Gaetz did start dating May when she was of age, and Nestor is her brother and Gaetz adored Nestor and Gaetz’ parents adore May and that’s why they gave May that killer car. Maybe this is all about love, as Gaetz says. And reasonable minds can always differ, but it’s not outlandish to connect the dots the way we’ve connected them above.

And again, this is all from Twitter. If it’s wrong, photo shopped, made up, we will be the first to retract and apologize. But if it’s right, aye chihuahua.

This is where it Gaetz good.