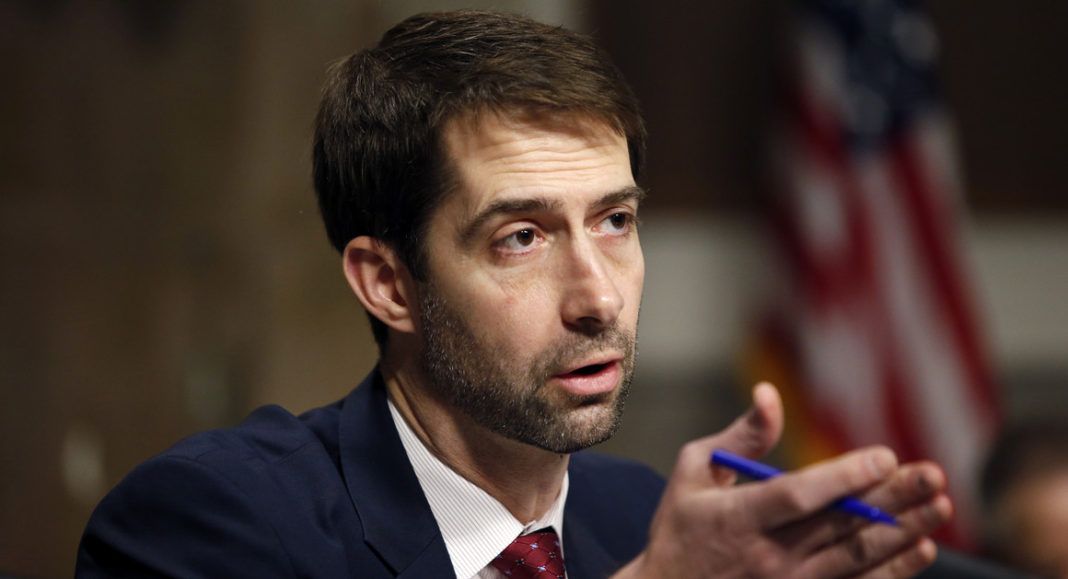 You know, I have this kind of a loose rule that I try to live by. I tend to try to avoid talking about shit that I know absolutely nothing about. Hell, I’m perfectly capable of making an ass of myself while talking about shit I’m conversant in. Why gild the lily.

Tom Cotton is furiously incensed. Which is nothing really new, he seems to live his entire life in a state of perpetual snit. Cotton’s cause de jour for the week is the disgusting spectacle of seeing US citizens peacefully protesting in front of the personal homes of lowlife judicial terrorists like Sam Alito and Brewski Brett Kavanaugh. And dammit, Cotton is As mad as hell, and I’m not going to take it anymore!

Cotton found the nearest Capitol Hill camera crew, and promptly vented his spleen; This is intolerable! We have far left mobs piling up in front of the personal residences of sitting judges, screaming at them while they’re actively considering a decision! And the silence coming from the White House and the DOJ is inexcusable! These people need to be rounded up, thrown in jail, and charged with a federal crime!

Jeez, the movie Network had nothing on this bozo. Question, Captain Vigilante. Exactly what federal crime would you like the protesters charged with. Illegal tamping down of the grass? Noise abatement curfew violations? Grammar violations for badly printed signs? What?

OK shitbird, class is now in session. In this country, we have a pesky little thing called the First Amendment. It came first because the founding fathers loved it the most. It allows citizens the right to publicly assemble and peacefully protest their government’s conduct. And whether you realize it or not, those 9 national nags in black muu-muu’s are federal judges. That’s right, we pay their salary. And when they’re about to fuck over 51.6% of the American population, we have the right to bitch about it. Period. Full Stop. I just wonder if he’d be so apoplectic if they were gathering in front of Sotomayor and Kagan’s houses?

But Cotton’s Trumper tantrum is also the height of hypocrisy. Because somehow or other, I don’t remember him running purple faced in front of a camera when a bunch of semi literate MAGA thugs toting AR-15’s tried to storm the Michigan statehouse to threaten the lawmakers from the galleries as they tried to do their job. Maybe I was out of town that week. And I sure as shit don’t remember Cotton screaming himself hoarse when another mob, or maybe the same one, of slobbering Trombies stormed to the front of the house of the Michigan Secretary of State, armed to the teeth, and screaming STOP The Steal! while she was in the house, trying to decorate a Christmas tree with her daughter. I must have been knocked out for my toenail fungus surgery that day.

Clearly Cotton’s ridiculous charade is exactly what it looks like. A desperate GOP attempt to make the leak the sole focus of attention, rather than the actual content of the leaked draft. Because that is toxic sludge for them going forward. 61% of Americans are telling the GOP in polls that they’re full of shit, and they’re telling those nitwit justices the same thing in front of their houses every night. Party on Wayne! Party on Garth!