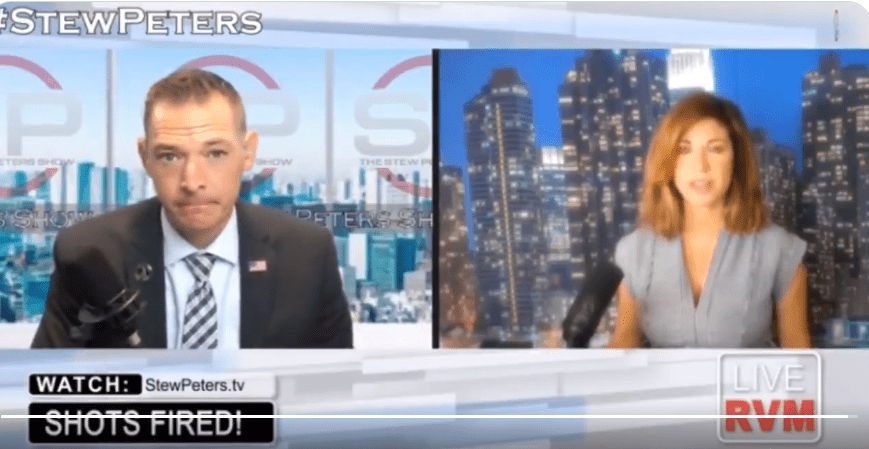 Stew Peters, or Stew Pidd, as he is known to many, is a very serious guy. He’s focusing all his angst this Christmas season on COVID restrictions. Apparently, a world where one can run maskless and free, utterly obvious to the fact that the Omicron variant now accounts for 90% of new cases reported in New York and New Jersey and the first Omicron-related death was reported in Texas yesterday, is a desired place to live.

Ignore the statistics of how highly contagious this variant is, Stew Peters is talking to you about free will. What’s that you say? What does philosophy have to do with infectious disease? Oh, Voice of Reason, it’s questions like these which are going to forever bar you from the corridors of power in Wingnuttia.

And Peters wants you to not only use your collective free will to wish away the coronavirus, he wants you to bully officials who enforce COVID mandates into not enforcing them, and if they don’t, he wants you to arrest them. This is some grassroots activism he’s got going. Unfortunately, the only grass these roots are going into is the grass at the cemetery.

Radical right-wing broadcaster Stew Peters wants his listeners to send notices to their local officials suggesting they'll be arrested if they don't remove all COVID restrictions and then prepare to arrest them if they do not comply. https://t.co/RHjtoTeR34 pic.twitter.com/aGAYKi48jL

Threatening government officials is against the law, but Peters doesn’t take any of that into account. He’s advocating mob rule, here.

Maybe his listeners will do what he suggests. The only problem with any of this is that while Peters drones on about the team that “God has assembled” he forgets that God also assembled the laws of nature back when. And those laws are immutable. If you’ve got a killer air borne virus in the world, that’s a problem for science, not activism. The coronavirus, in all its variants, doesn’t care what you think about it or if you believe it’s real. It will kill you all the same. Peters literally wants you to bring an arrest warrant, a legal instrument, to a biological fight. Good luck with that.

Maybe you could serve an eviction notice on the coronavirus while you’re at it, Stew. I mean, it seems like efforts in futility are the order of the day, right, so why not? Get Paula Jones to stand behind you and chant in tongues while you’re doing it.

Peters has risen on the far right over the past few months as a sort of slightly less unhinged version of Alex Jones, pumping out coronavirus disinformation and other conspiracy theories while allying himself with Trumpworld figures like lawyer Lin Wood. Amid his calls for Anthony Fauci’s execution, Peters amassed a sizable audience of nearly 300,000 followers on social media app Telegram, and played host on his show to figures as prominent as Arizona GOP chair Kelli Ward.

… unlike his competitors, Peters hasn’t always been climbing the right-wing media ladder. As recently as a few months ago, Peters was tackling and tasing suspects as a bounty hunter.

Peters’ rise reflects the tumultuous environment of digital right-wing media, where a previously little-known bounty hunter can emerge out of practically nowhere to become a power player. Along the way, Peters has had plenty of his own run-ins with the law.

Around 1 a.m. on Feb. 19, Peters’ wife called the police in Red Wing, Minnesota, claiming Peters was in a drunken rage after getting home from his bowling league. In an angry scramble to find his phone, according to an account from Peters’ wife recorded in a police report, he had allegedly started to berate her and thrown household items, including boots and pillows, at her. […]

His wife told officers that her husband regularly became belligerently drunk, saying incidents like the one that night were, in the words of one officer on the scene, “happening too frequently.” According to the report, his wife said she would normally lay low and wait until Peters passed out, saying she was afraid to call the police. She told police that on a recent trip to Florida, Peters had grown furious because he couldn’t find his wallet, taking her own wallet and identification and making her feel “trapped.”

“I don’t know what he’s capable of doing when he’s drinking,” she said, according to the report.

Peters gave police shifting explanations for how he had gotten so drunk, as well as how the altercation began.

“I know how this goes, so I’m the guy that goes bowling and gets drunk, I come home, the wife is pissed that I’m drunk,” Peters told officers, according to the report.

This wasn’t Peters’ first encounter with police. He was convicted of theft as a teenager for stealing stereo equipment from a Radio Shack where he worked. Peters was arrested in Florida in 2006 for falsely impersonating an officer, unlawful use of a blue light, and robbery of less than $300 while using a weapon. Those charges were later dropped.

Peters saw an opportunity to make money talking crazy talk. The right-wing is filled with opportunists nowadays. This political climate is their dream come true. You don’t have to work for a living, all you have to do is come up with an idea that’s slightly more crazy than what the other right-wingnuts are coming up with at any given moment, and steal a slice of their audience. Ask Steve Bannon or Dan Bongino, they’ve got this act wired.

Peters was a disc jockey and a rapper for a while, and then became a bounty hunter. Now he’s a conspiracy theorist. Nothing but the best people.