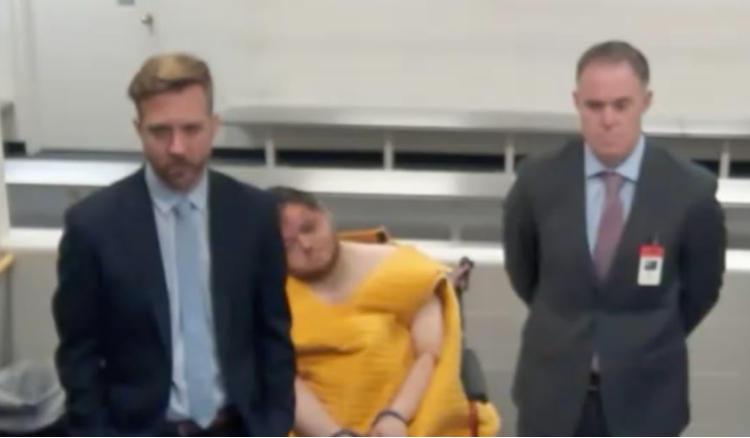 What you are about to see takes the absolute cake. You’re actually going to hear a homophobic man exclaim his concern over his son’s sexuality above and beyond the fact that the son is an accused murderer of five people. What a set of priorities. And you’re going to hear how he “praised violent behavior” on his son’s part early on.

In a court filing late Tuesday, lawyers for Aldrich, who in 2016 changed his name from Nicholas Franklin Brink to escape his father’s sordid past, said Aldrich is non-binary, saying “they use they/them pronouns.”

However, booking records list Aldrich’s gender as male. Additionally, in text messages from the day of the shooting, which were shown to The Daily Beast by a source close to Aldrich, Aldrich’s mother referred to her son as he and him. […]

Aldrich, Brink, and Aldrich’s mother, Laura Voepel, have long raised red flags among others in the family, a relative told The Daily Beast shortly after Aldrich’s arrest.

“I don’t want anything to do with that part of the family,” the relative said, asking that their name not be used to avoid becoming tangled up with them again. “They’ve always had issues, a lot of problems… I’m totally disgusted by that side of the family right now.” […]

At the same time, Brink, a recovering methamphetamine user who once appeared on the reality show Intervention, said he “praised [Aldrich] for violent behavior really early. I told him it works. It is instant and you’ll get immediate results.”

Brink also said he didn’t realize Aldrich was still alive, telling CBS 8 that Voepel called him in 2016 and said their son had changed their name to Anderson Lee Aldrich, then died by suicide.

What a family. There are a lot of families on the wrong side of the bell shaped curve, and this is certainly one of them.