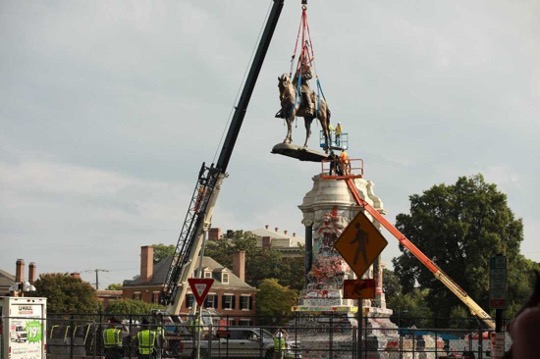 Nothing like an uninformed opinion passing as reasoned commentary. That’s what TV pundit land is made of and nobody is more the superficial simulacrum of a thinker than Donald Trump. Trump decided to weigh in on the removal of the statue of Robert E. Lee recently. If you missed his paean to another king of white supremacy, that of one “genius” to another, here it is.

Just watched as a massive crane took down the magnificent and very famous statue of “Robert E. Lee On His Horse” in Richmond, Virginia. It has long been recognized as a beautiful piece of bronze sculpture. To add insult to injury, those who support this “taking” now plan to cut it into three pieces, and throw this work of art into storage prior to its complete desecration.

Robert E. Lee is considered by many Generals to be the greatest strategist of them all. President Lincoln wanted him to command the North, in which case the war would have been over in one day. Robert E. Lee instead chose the other side because of his great love of Virginia, and except for Gettysburg, would have won the war. He should be remembered as perhaps the greatest unifying force after the war was over, ardent in his resolve to bring the North and South together through many means of reconciliation and imploring his soldiers to do their duty in becoming good citizens of this Country.

Our culture is being destroyed and our history and heritage, both good and bad, are being extinguished by the Radical Left, and we can’t let that happen! If only we had Robert E. Lee to command our troops in Afghanistan, that disaster would have ended in a complete and total victory many years ago. What an embarrassment we are suffering because we don’t have the genius of a Robert E. Lee!

Now that you’ve read Trump’s excursion into unreality, come down to earth and read what really happened. Dana Milbank has a column up in the Washington Post and he says Trump’s tribute is not only ugly, it’s fake history. And it won’t surprise you that Trump’s tribute is in fact that of one loser to another.

For a point-by-point grading of Trump’s history paper, I checked in with Ty Seidule, a retired U.S. Army brigadier general and military historian who is the former head of the U.S. Military Academy history department. Now at Hamilton College, he’s the author of “Robert E. Lee and Me: A Southerner’s Reckoning With the Myth of the Lost Cause.”

Lee chose the Confederacy because of his great love of Virginia? Seidule said Lee was one of eight U.S. Army colonels from Virginia at the time of secession in 1861. The other seven remained loyal to the United States — as did Virginian Winfield Scott, the U.S. Army’s commander, and 80 percent of all colonels from the South. “Lee’s the outlier,” Seidule said. That may be because at that level of Army officers “no one benefited from slavery more than he did.” Lee ran an enslaved-labor farm — a plantation — from 1857 to 1860. He wasn’t even a resident of Virginia for most of his prewar life; Alexandria, his hometown, was part of the District of Columbia until 1847.

Would have won but for Gettysburg? The day after Gettysburg, Ulysses S. Grant triumphed at Vicksburg, giving the U.S. Army control of the Mississippi River and splitting the Confederacy. Lee’s army couldn’t function without thousands of enslaved people working as servants or in factories and on farms, and after Vicksburg, Seidule said, “they lose all that enslaved labor” as the U.S. Army pushed into the South.

Now this next section I love. General Lee argued against freed slaves having the vote because the said they “couldn’t vote intelligently.” That’s my argument against MAGAs having the vote. We can’t disenfranchise them and to educate them seems an exercise in futility so we’re just going to have to outnumber them.

Greatest unifying force after the war? Grant called Lee’s actions “forced acquiescence” that was “grudging and pernicious.” Though more conciliatory than others, Lee testified to Congress in 1866 that Black residents “cannot vote intelligently” and that “it would be better for Virginia if she could get rid of them.” In 1868, Lee joined in issuing the White Sulphur Springs manifesto, which argued that Black people had “neither the intelligence nor the qualifications … for political power.” Argued Seidule: “His idea of reconciliation is only if the White South is given complete political control over Black people.”

“No one has lost more completely in American history than Robert E. Lee,” Seidule said. “There is no general that has been more crushed, more defeated, at the strategic, tactical, operational level. … How much genius does it take to lose absolutely and completely?”

To extrapolate from there, how much “genius” does it take to run for POTUS twice, win by a margin of 80,000 votes in three states, lose the popular vote decisively both times, and then be defeated by the largest margin in history the second time? Because that’s Trump’s record. No wonder he loves Robert E. Lee so much. They’re soulmates, both handling jobs that were way over their heads and which they ended up getting for the worst of reasons.