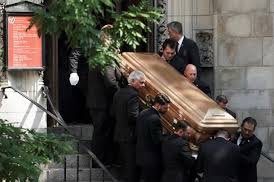 No wonder Mad Magazine went out of business. How could it possibly compete with Donald Trump and the GOP? Ivana Trump tumbled down the staircase and died of blunt trauma a few weeks ago. She died alone. Then she had a memorial service, where there wasn’t a moist eye in the house, and then her coffin was carried out by pallbearers, none of whom were her sons or son-in-law.

Then she went to her final resting spot beside Hole One at ex-hubby’s golf course in Bedminster, New Jersey, because that way he gets out of paying real estate taxes. Daily Beast:

Ivana Trump was buried next to the first hole of an exclusive New Jersey golf club owned by her ex-husband, former president Donald Trump. Ivana’s glossy black gravestone was marked with white flowers as it was shown publicly for the first time this week by The New York Post, a week after her private funeral. She died July 14 from blunt force trauma after tumbling down the stairs in her Manhattan townhouse.

Donald Trump, who received a permit to build 10 graves for his family on the course in 2014, has been working to get approval for a larger cemetery with at least 300 plots since 2007. His plans for the cemetery have been repeatedly shut down by officials who worried it would be an “attractive nuisance,” as he originally wanted to build a mausoleum for himself and his family complete with 19-foot stone obelisks.

That sounds normal, doesn’t it? And what does the future hold in store? Marla at Hole Two and Melania at Hole Three? 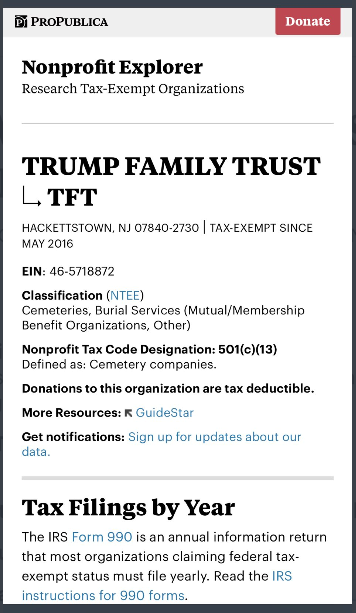 🤔Trump had already found a way to lower his taxes on that wooded, largely unused parcel. He had persuaded the township to declare it a farm because some trees on the site are turned into mulch. https://t.co/VR9DWup7Dv

Now Trump is in the cemetery business. Say, I know a guy who would make a great undertaker. He looks like a mortician straight out of central casting. His name is Mike Pence. 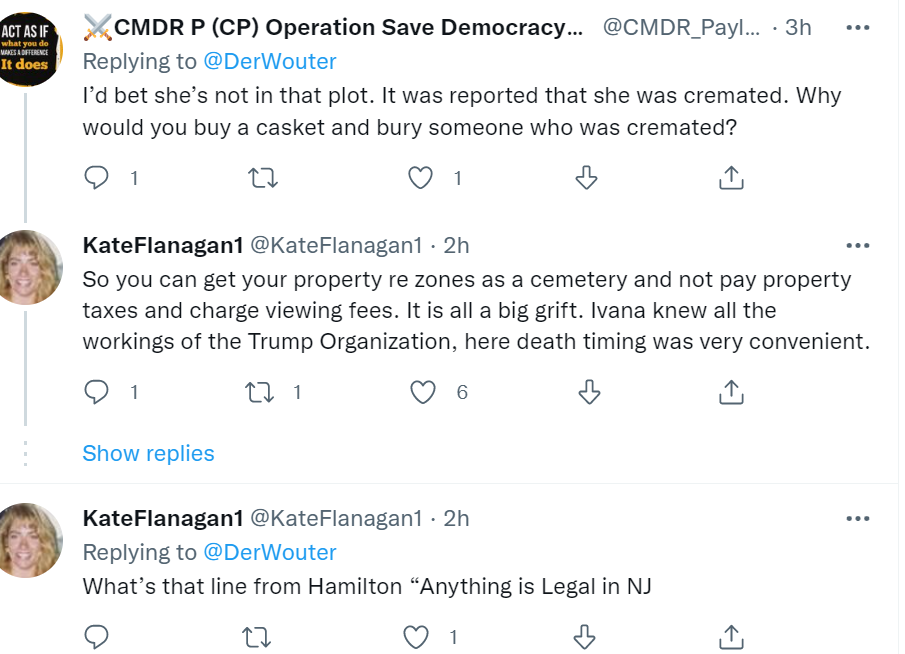 The socialite businesswoman had been suffering hip pain and had such trouble walking that she couldn’t even leave her house for a quick jaunt to the Hamptons, a close friend told The New York Post on Friday.

She also was so unsteady on her feet at times that she needed a personal health aide to help walk around her neighborhood, other friends said.

As I mentioned at length in a previous post here, Ivana needed a hip surgery but wouldn’t get it. I had a hip surgery myself in 2019. I understand the pain she was in. What I will go to my own grave not understanding is why in the name of God she chose to live in pain and not be able to move when she had a choice to live a much better, healthier life? There’s something more here than meets the eye. This makes zero sense. She just gave up on life. That’s my opinion, in all events, having been exactly where she was with respect to needing a life altering operation. Nobody normal minded chooses to stay sick and in pain when they have the option to live pain free and enjoy life again. Something else was going on.