Nobody seems to quite know what got Baby Trump all a tither. The best guess is that he’s acting out because he needs to displace aggression, not because anything new has actually happened.

As you read the other day, it’s official now, Trump has a babysitter. He will have a campaign official accompanying him at Mar-a-Lago at all times. This was decided after the disastrous events of the Kanye West/Nick Fuentes dinner.

Trump is not taking the publicity well at all. Here is his response to it. 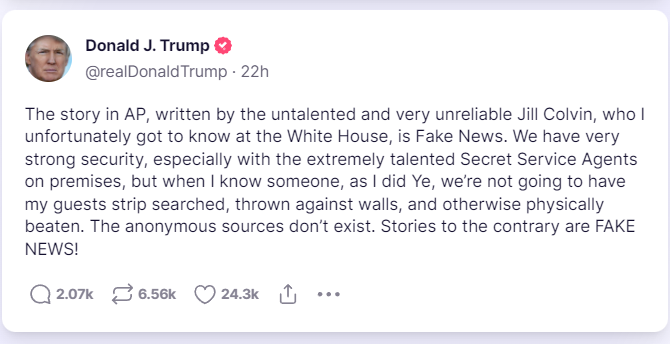 He is seriously coming unglued. Where is he getting this from? If you read the AP story, there is nothing of the sort there. It’s a factual description of his campaign putting new protocols in place. And they need to be put in place. Don’t forget, not too long ago Trump had somebody claiming to be a fake Russian heiress wandering the halls of Mar-a-Lago.  And these are the same halls where Top Secret documents have been contained, illegally.

The only one creating fake news, right on his own social media platform, is Trump.

Strip searching and violence is not called for, nor was it mentioned by anybody else. “Vetting” was the operant word, not “beating.”

This is par for the Trump course, but still and all, you begin to wonder how he can be so off the walls sometime.