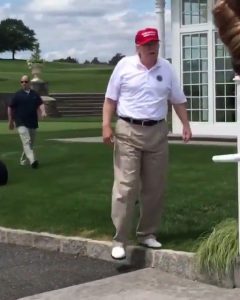 From Rick Reilly, in The Guardian, who wrote the book on Trump cheating in golf:

“You’re mostly laughing,” Reilly says, “but at times you’re crying – how did this happen? As a golfer he really offends me. Cheating? Hate that. Driving carts on greens? Hate that. Wearing old dockers two sizes too small for him? Give me a break. Kicking your ball so often the caddies call you Pelé? I so hate that.

It has been well established that Trump cheats at golf. Is there anything in life in which he doesn’t cheat? Taxes? Files? A peaceful transfer of power? Terrible deals?

He has often played the first round of golf at a new course and then claims to be the club champion because they don’t have another competition for a couple of years. And now, he’s announcing that he won the club championship for the senior division. Remember, this is a competition in which the caddies (who ride a golf cart) and Trump hauls off to his ball first, only to kick it out into the fairway, and call him “Pele.”. Who wants to bet that the “senior division” cut-off was the day before his age?

Here is our guy announcing the “honor” it is to win the club championship:

A great honor to have won the Senior Club Championship at Trump International Golf Club, one of the best courses in the Country, in Palm Beach County, Florida. Competed against many fine golfers, and was hitting the ball long and straight. The reason that I announce this on fabulous TRUTH is that, in a very real way, it serves as a physical exam, only MUCH tougher. You need strength and stamina to WIN, & I have strength & stamina – most others don’t. You also need strength & stamina to GOVERN!

No, Trump, a physical exam is a physical exam, and it can be much tougher when one has to do a drug screen, a real weight check, and a real stress test.

God, he’s even cheating on describing what driving a little cart to a ball, swinging a club, and back in the cart until walking around the green is exercise, much harder than a physical exam!
****
[email protected], @JasonMiciak, SUBSTACK: MUCH LEFT ADO