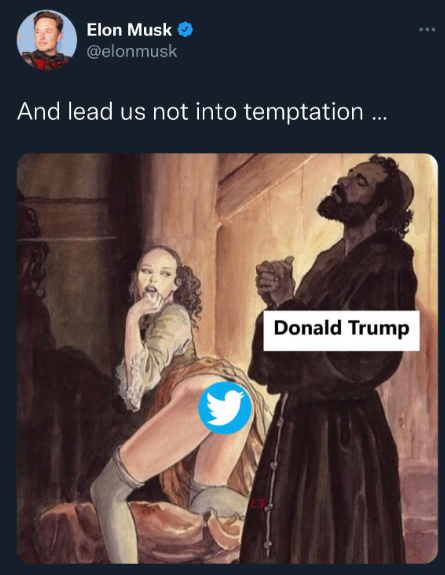 Imagine a world where the richest man in it decides to taunt a former U.S. president who once called him a “bullshit artist” and declared that he would never buy the instrumentality with which the rich man is now taunting the former guy — and control of the instrumentality is a big deal because TFG got banned from it, at the height of his, and its, destructive powers.

It’s a little hard to find a takeaway at this point, but the obvious one would seem to be that F. Scott Fitzgerald was right and the very rich are different from you and me, because this seems to be a pissing contest that perhaps only billionaires or those who aspire to be billionaires could understand. It’s also a conflict which anybody who has gotten through middle school can attest to, it’s schoolyard bullying, amplified to a global level.

Elon Musk may not have uttered the magic words, “I choose you,” but he did do the digital equivalent with the ridiculous image that you see posted atop this piece. Could he be trying to get back at Donald Trump for this slight? Is this what this is all about?

July: “Elon is not gonna buy twitter. He’s got himself a mess … He’s another bullshit artist.” pic.twitter.com/WgT3pEMAv5

Or, was this the slight that set Musk off? 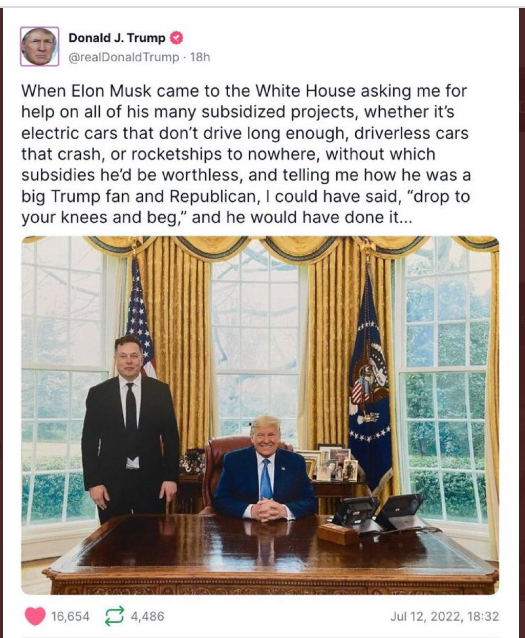 Who knows? But it appears that those two ole boys have some issues which need to be resolved. The comical part of it is, that Musk put himself in the ridiculously compromised position that he did by buying Twitter in the first place, and Trump’s entire life is going from one ridiculously compromised situation to the next, only now it doesn’t appear his Teflon coating is working as well as it did for so many years.

This is an interesting meltdown to watch. As you may have read here yesterday, Trump’s media company either needs to merge with Digital World Acquisition Company with a November 22 vote by shareholders, or it needs to pay another $3 million for another three month delay, or DWAC may simply liquidate and then Truth Social’s doors would be closing soon.

Meanwhile, Trump’s Twitter account has 87.4 million followers on it and he has not posted tweet one since his reinstatement Saturday night. He has, however, posted a number of items on Truth Social.