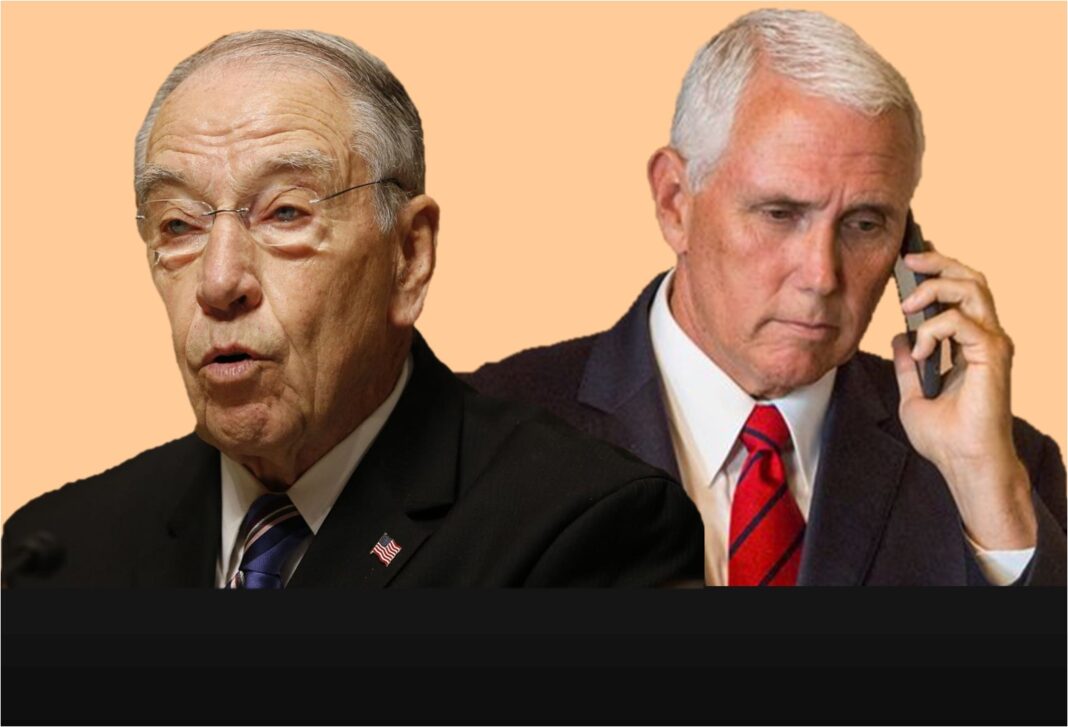 What did Chuck Grassley know, when did he know it and who told him?

For the first 20 days of January 2021, the President of the US Senate was VP Pence. The President Pro Tempore was Sen Chuck Grassley.

On January 5, Sen Grassley made an announcement that was of little interest at the time but, in the wake of the January 6 insurrection, it has taken on much greater import.

Sen. Chuck Grassley, R-Iowa, said he would preside over the U.S. Senate debate surrounding disputes of the 2020 election results if Vice President Mike Pence does not show up.
He suggested Pence was not expected to attend

But then there was a retraction an hour or so later by Grassley’s staff who claimed it was a “misinterpretation” and that VP Pence was expected to be there.

The rapidity of the retraction shone an even stronger spotlight on Grassley’s statement rather than quash all speculation as I’m sure was their intention. It certainly had my spidey senses tingling like crazy. I was wondering what kind of plot Trump and his criminal cabal were hatching this time.

Then January 6 erupted in a riot of mob violence and vandalism, and I forgot all about the curious case of Grassley and Pence. At the time I didn’t know Pence had been evacuated from the chamber to the loading dock area. That news didn’t break until later that year.

And it wasn’t until Grassley’s name appeared on my Twitter feed last night, that the dots began to coalesce and connect one with another.

When Grassley made the initial announcement, I wondered who’d told him Pence wouldn’t be there. It wouldn’t have been Pence himself or his staff because that would have fallen to them to announce alongside an explanation of why the VP couldn’t make it.

Instead, it appeared that Pence’s staff, surprised by Grassley’s announcement, were the ones who contacted Grassley’s office to assure them the VP would be in attendance and to advise that their Senator should retract his statement immediately.

But this wasn’t a mistake and Grassley didn’t make it up. Somebody told Grassley he’d be taking over from Pence, probably someone in the White House, certainly someone Grassley trusted and believed. He also believed it was above board or he wouldn’t have announced it. He must’ve been more than a little surprised to realise Pence didn’t know he wouldn’t be there.

I hope the Jan 6 Committee ask Grassley to testify. This may have seemed like a small and forgettable mistake at the time but, in the context of the events the following day, it’s a bombshell. It has the look and smell of a plot within a plot, a fallback plan in case Pence proved uncooperative. Grassley, it appears, was their plan B.

But who was it who spoke to Grassley and what was he told?  Was he told Pence might be called away or that he wouldn’t be there at all? If it was the latter, how were they planning to stop Pence from attending?

In the event that he did stand in for the VP, what was Grassley expected to do? Was he told to reject certain EC votes and ask those states to redo them? Chuck isn’t the sharpest mallet in the toolbox so they could be sure he’d do exactly what he was told without questioning it. Unfortunately for their plans, they didn’t tell Grassley not to announce it.

When the day came and violent insurrectionists invaded the building, Grassley was evacuated and sequestered in a safe space with his fellow Senators. Not so for Pence. His security detail initially sought sanctuary in the Senate President’s rooms in the Capitol but they were very effectively foiled in the attempt.

Dr Allison Gill tweeting as @MuellerSheWrote explains how in this exclusive:

BREAKING: EXCLUSIVE: THREAD: Pence, his aides, and staff were locked out of their offices in the capitol complex during the insurrection because their access badges had been DEACTIVATED the morning of the attack, according to sources familiar with the incident 1/

The access badges worked that morning before the mob entered the capitol, but once Pence was removed from the chamber floor, their badges no longer worked. Access was restored later that night after the threat was over. 3/

When they realised they were locked out, CCTV picked up the group heading downstairs only minutes ahead of the mob. Their destination was the open, unsecured area of the loading dock. It is easily accessible to vehicles and soon after their arrival, a Secret Service car pulled up – but Pence refused to get in.

This is how Jan 6 Committee member, Jamie Raskin, responded when he learned of this:

“When I heard that [Pence] said, ‘I’m not getting in that car,’ that was utterly chilling to me. Those are six of the most chilling words in American history to me.”

Why did Pence refuse to be driven to safety from a place that was clearly unsafe? Because he’d learned the day before of the plan regarding Grassley which could only mean there was a plot to spirit him away and not return him in time to finish certifying the EC count. The deactivated badges alone provided strong evidence of the existence of such a plot. The Secret Service vehicle driven by an agent unknown to Pence confirmed it.

Grassley had been set up to do what Pence refused to do and out of fear, anger or a sense of duty, Pence decided to thwart their plot to replace him with a more willing conspirator. He, his aides and his security detail remained in place until the all-clear allowed them to re-enter the building. Speaker Pelosi reconvened the joint session at 8 pm that evening and they remained until the EC count was completed and certified at 3:44 am on July 7.

I have no doubt that the January 6 Committee is well aware of all these incidents and how they connect. I hope they quietly subpoena Chuck Grassley and tell him very firmly not to speak to anyone until he’s testified to them. His public announcement on January 5 alerted Pence to the plot against him and that worked to the benefit of democracy. But the Jan 6 Committee members will not want Grassley alerting anyone to the fact that he’s about to spill the beans.