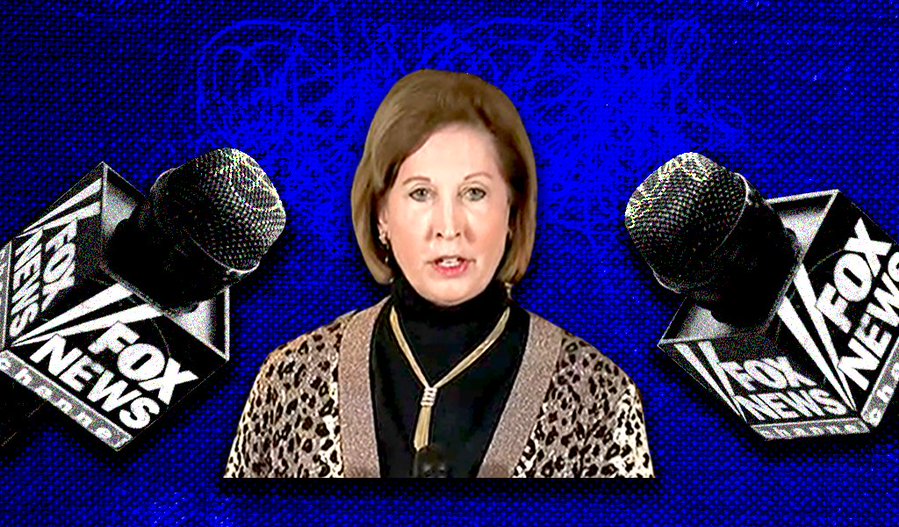 I can’t believe that I actually have to tell you people something this fucking stupid! It makes me look like I’m sliding down some Q-Anon conspiracy rathole. But Yahoo News is running with it, and it was mentioned on MSNBC tonight, so here we go to Whack-A-Mole land.

One would think that Sidney Powell would have enough on her legal and personal plate right now to not go out and start looking for more trouble. After all, it isn’t like she’s been exactly flying under the radar for the last couple of years.

For starters, she was an omnipresent part of the Giuliani-Lindell-Powell post election cluster fuck. And she was so consistently nonsensically incoherent that every time she stepped in front of a microphone, your mind can’t help but put a tinfoil hat with a foil spike on top of her head. How does she lave the house without a Halloween mask on to hide her identity?

And if anything, her current legal situation is even worse, both personally as well as professionally. Personally, her stubborn insistence in following Borat Giuliani down the Dominion Voting Machine rabbit hole has landed her next to Giuliani in a multi billion dollar lawsuit that has been cleared to proceed.

Professionally, it’s no better. Her enthusiastic fervor for spouting specious Trump fraud bullshit in court infuriated one judge so much that he not only dismissed the case, he filed a formal complaint with her state bar association to revoke her ticket to practice. That has since become embroiled in a court battle, and according to Forbes News, the judge just gave that case permission to proceed as well. Helpful hint. A lawyer without a state license is called a legal clerk.

According to Yahoo News, a team of DOJ lawyers went to court today to ask a judge to demand lawyers for the anti-government Oath Keepers to disclose the sources of their revenue for their defense.

Reporting is that quietly and under the radar, Powell’s political group, Defending the Republic, has funded several of the defense lawyers. Apparently it never occurred to Powel that, after her work on behalf of Trump, her funding of a bunch of MAGA loyalists just might constitute a conflict of interest. Or maybe it did, since she tried to keep it on the down and low.

The part I can’t figure out is, why? I mean, after all, she may be an idiot, but she’s not the Roslyn Village Idiot, at least I don’t think so. But why, after all the negative press you’ve generated, fo out on a limb and risk exposure for funding a far right anti government group’s defense? Is Trump promising to repay you from his Leadership PAC?

But it is what it is. And so. Attorney Sidney Powell. For never knowing when to stop piling more personal and legal difficulty on top of yourself. Stand up and take a bow, FOOL!