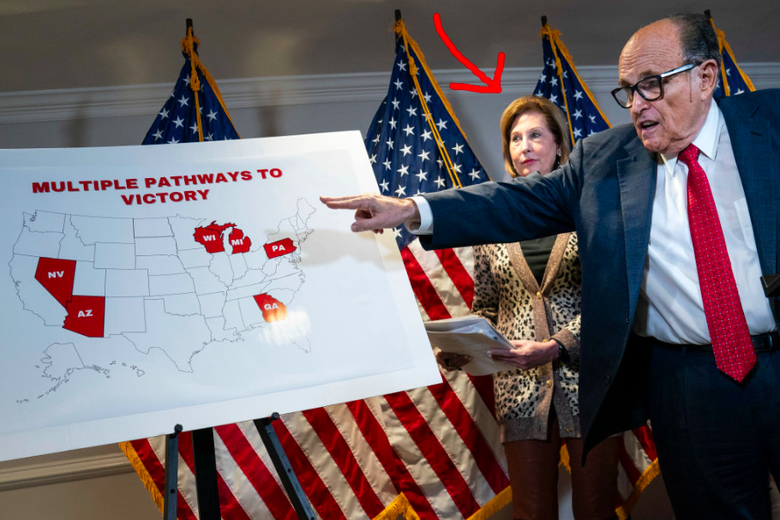 The still practicing members of Incompetence, Inc. just do not know how things work. But life is about to give them a tutorial, as it does us all, and in the case of Sidney Powell, Mike Lindell and their wingman, Joseph Flynn, who just filed with the FEC to open up a superPAC “Restore the Republic” the lesson will be a harsh one.

Now here’s where it gets interesting and it is vintage Strikeforce Rudy. The FEC requires that you list a bank where the donations will go. They listed Arkansas-based Bank OZK (formerly known as Bank of the Ozarks). The problem is, OZK never heard of these people. There not only isn’t an account, OZK doesn’t even do that kind of banking. Raw Story:

“We have done a thorough inquiry and determined this entity has no account at Bank OZK, has no account pending, and has never had an account here. Per our established policy, the PAC is not eligible for an account with Bank OZK,” Susan Blair, executive vice president and spokeswoman for Bank OZK, said. “We have policies in place prohibiting accounts for certain entities. We don’t publicly disclose the specifics of those policies.”

Where Powell got the idea to use OZK, who knows? Closed her eyes and pointed at a list of banks on the computer screen? I would say that surely she can’t be so naive as to not know that banks are like insurance companies, who underwrite certain things and not others, not all banks do all kinds of banking. But this is Sidney Powell we’re talking about so anything is possible.

PACs are legally required to have separate bank accounts, rather than accounts commingled with, for instance, the personal money of a PAC treasurer. Filing false information to the FEC could be a federal crime, said agency spokeswoman Judith Ingram. She said the agency has a process for confirming that information campaigns or committees submit is accurate, including potentially “questionable contact or bank information.”

Now Powell’s problem is not with the FEC. The FEC, when it finds contradictory information will send a pleasant reminder that “knowingly and willfully making any materially false, fictitious, or fraudulent statement or representation to a federal government agency, including the Federal Election Commission, is punishable under federal law.” So they’ll have a chance to amend their application. What’s that you say? You’re having a profound sense of deja vu? Oh, you’re just thinking about the time Jared Kushner had to amend his security clearance paperwork 40 times, that’s all. Not to worry.

No, Powell can file an amended Statement of Organization and name another bank, that’s not her real problem. Her real problem is who wants to do business with her? Or Mike Lindell? Right now he’s hemorrhaging support and money.

It remains to be seen, however, what financial institution would want to hold money for a super PAC headed by Powell, who promoted conspiracy theories about rigged voting machines, and Lindell, who was captured in photos at the White House earlier this month carrying notes that appeared to include the suggestion that Trump invoke martial law or the Insurrection Act.

Corporations, driven by public outcry after the violent attack on the Capitol by Trump supporters earlier this month that resulted in five deaths and a military lockdown in Washington, D.C., have been going to lengths to distance themselves from the politicians or political figures who pushed the discredited notion that President Joe Biden did not actually win the election.

Just last week, following a public outcry on Twitter, the Loews Hotels chain cancelled a reservation that Sen. Josh Hawley had previously booked for a February fundraiser at their Orlando resort, noting the company is “horrified and opposed to the events at the Capitol and all who supported and incited the actions.” […]

Major financial institutions like JP Morgan Chase, Bank of America, Citigroup and Wells Fargo have all made statements noting they would either pause donations to candidates or political action committees, or factor the Capitol riots into their decision-making when it comes time to cut political checks. That begs the question whether the same institutions would agree to hold money for a group whose stated aim is to continue to promote the same conspiracies.

In fact, it seems like it’s just bad PR. The fact that Bank OZK’s is not involved in the machinations of this super PAC may save the relatively small regional lender a headache; some Twitter users had already been tagging the financial institution on Twitter, asking questions such as, “Do you want your bank’s reputation to be linked with this person who fought tooth and nail to overturn our election without *any* evidence?” and “Y’all support insurrection dollars and misinformation frenzied donations running through your bank???”

In this age as well, and throughout time, I suspect, public sentiment has been and will be key. Public sentiment was already against Donald Trump for irrationally claiming he lost the election, and then when he kept running with the ball, all the way to citing insurrection, he went too far. And now Sidney Powell, in her inimitable unthinking and unreasoning way, thinks that somehow she’s going to keep the Trump circus going — or line her own pockets and Lindell’s or both.