If you read this blog regularly, you are the kind of person who should not be the least bit surprised at the treachery and usury of Donald Trump. That said, what you’re about to read may blow even you away. This is cold. And let me bottom line it for you: Trump hasn’t been Ivana’s official “next of kin” for a long time. As you will read below, “it would have taken her mother and her three kids — or the executor of her estate — to agree to this.”

As you have seen, the grave is tacky as hell. There’s not even sod covering the dirt. It looks like a pauper’s grave. It’s a disgrace by normal standards, let alone those of the billionaire elite of this world. But it’s carved in stone legally, the executor of the estate, whomever that may be, and/or Ivana’s actual next of kin, which is her still-living mother and her three children had to agree to this. Donald Trump did not do this alone. But he’s never done any of it alone, now has he?

No stipulation regarding a minimum # of human remains necessary for the tax breaks to kick in–looks like one corpse will suffice to make at least 3 forms of tax vanish. @alexcobham @RichardJMurphyhttps://t.co/WOHuuJhFmk

I was skeptical, because I didn't think her three children–whom she apparently loved and raised with a great deal of care–would allow her to be treated so disgracefully for what amounts to a handful of silver. 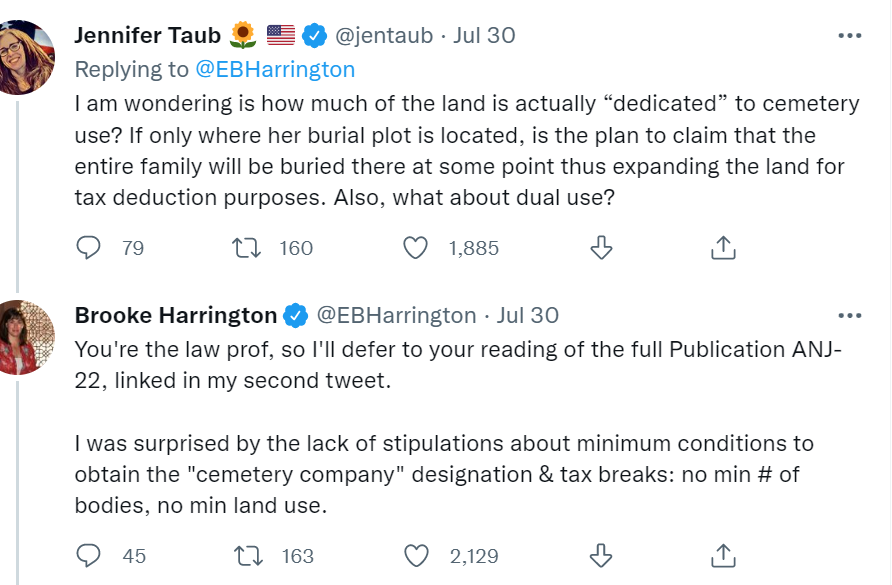 Pay special attention in this next block of tweets, to the middle tweet. 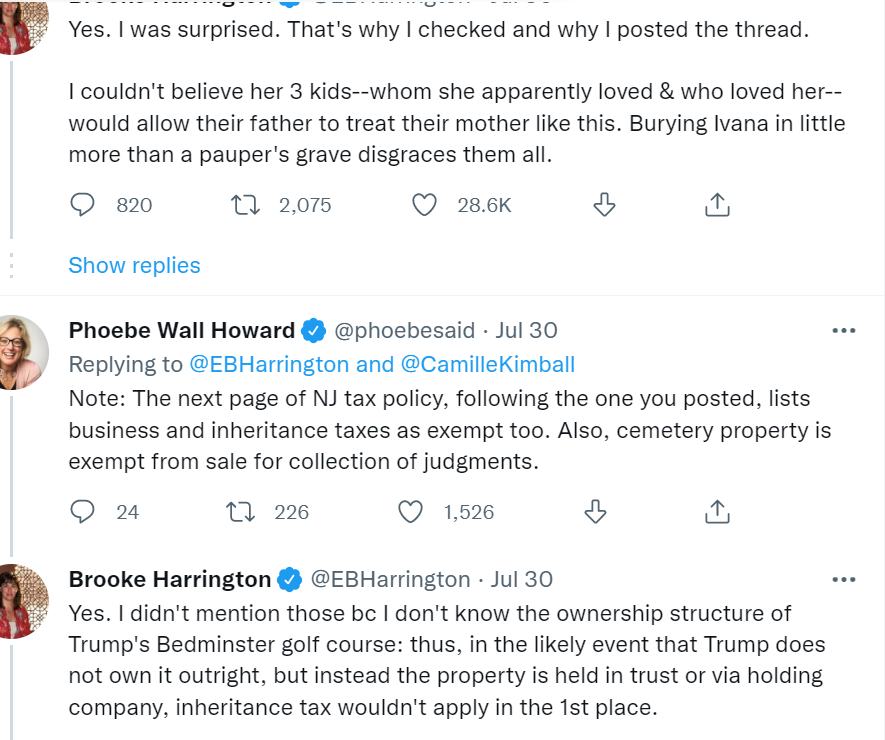 My instinct is that Trump used that benefit, exemption from judgments, to wheel and deal with an actual owner. Just a speculation, admittedly, but in six years of guessing this con man’s game, I unfortunately have never overestimated his depravity or his avarice. 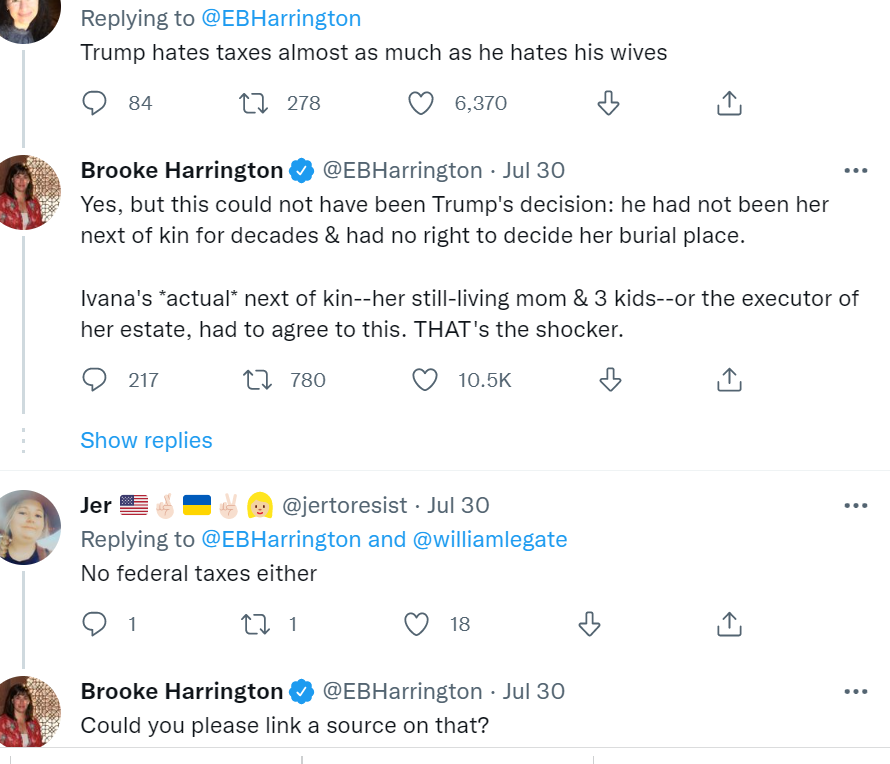 All the materials cited to so far are state sources. If anybody knows about federal, chime in. 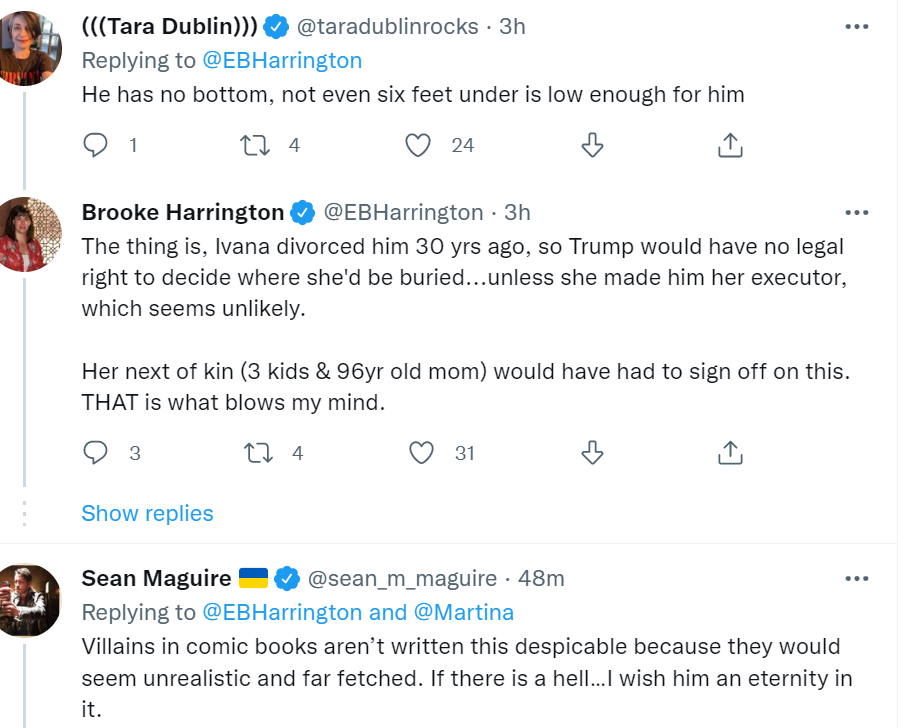 And you’ll love this. Trump has excommunicated Tiffany from the “family plot.” 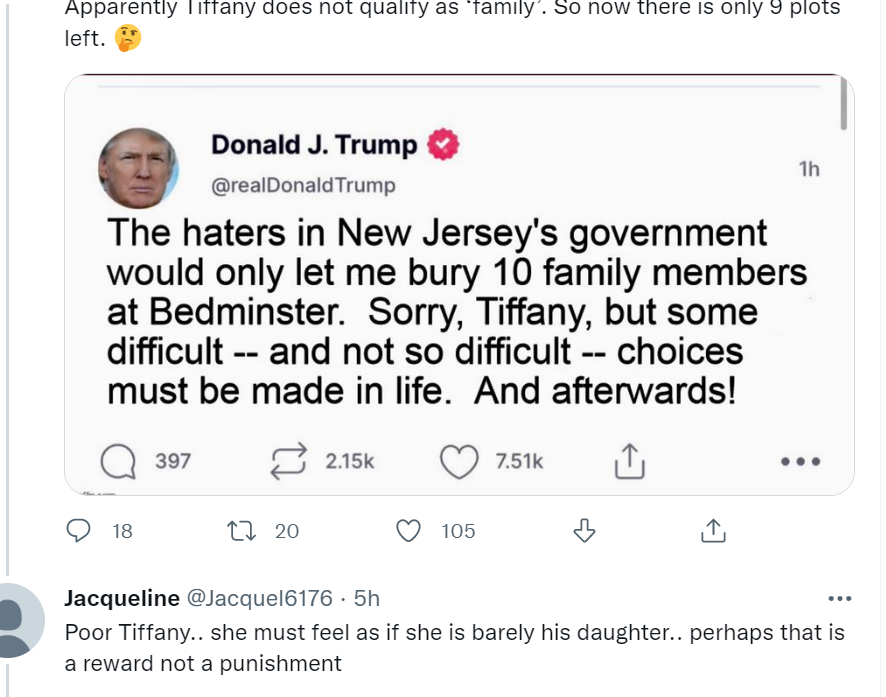 And then there’s this.

Anybody know any grave robbers from outer space? That’s the only way to get to the bottom of this. We’ll make a movie out of it. Ivana’s ashes could well be someplace else. That means that the memorial service at the church and the gold coffin were all a photo op. And that makes perfect sense considering how the family comported themselves at the church.

I put nothing past Donald Trump. No.Thing.

Adorned with golf cart tracks is a nice touch. 🙄 pic.twitter.com/vOr5gCDrrf