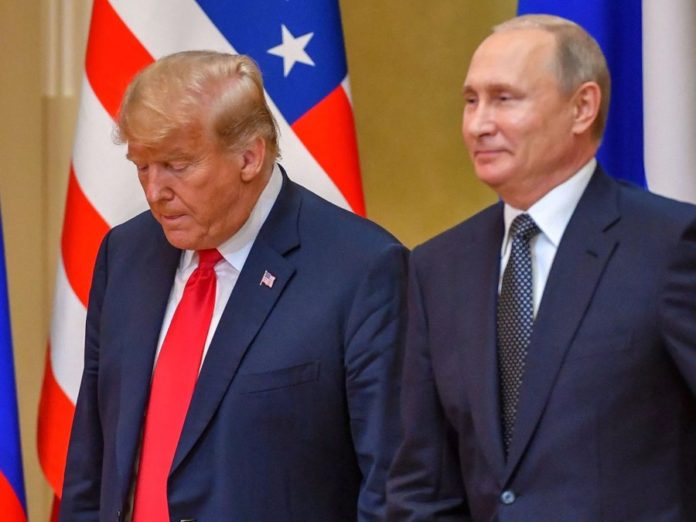 In the latest weird jump through the proverbial Looking Glass Trump is now openly supportive of Ukraine and critical of Russia’s invasion.  By extension that means he’s criticizing his monetary and political benefactor – Vladmir Putin.   The very Putin who Trump was fluffing with every ounce of effort he could muster mere days ago.   No more talk of Putin’s “genius” or about how the whole notion of Russia taking over Ukraine was no big deal and Ukraine (and everyone else) should just accept it, move on and forget about it.   And start accepting Putin as one of the most important, if not THE most powerful leader on the world stage.

What a difference (less than) a week makes!    Now Trump is claiming his talk of Putin’s genius either never happened or was taken “out of context.”  He says all that’s going on is tragic, that Ukrainians are awesome and always have been and who the hell would think that it was okay to take them over, or that they were ever part of Russia.    Typical Trumpian gaslighting.   Well, maybe emission of gas filled with copious bits of other material – as in sharting out his mouth but you get what I mean.

The thing I find interesting is that Trump seems to now believe that even if it takes a months long bloody insurgency that Russian will lose,   More to the point I think he now believes that Putin and his oligarchs are going down.   Just as importantly, I think he’s concluded in the meantime they are going to be too preoccupied with saving their own asses to go after him!

The past couple of decades of having to depend on dirty Russian money, ultimately resulting in him having to play U.S. Presidential lapdog to Putin has to have grated on Trump’s ego.   He has and will continue to bluster that it’s all fake news and whatnot but this is Trump we are talking about.   He knows how often it’s been suggested that he’s in Putin’s pocket and that plenty of credible people have been making the case.   Worse from his point of view is that although his vaunted base of MAGAts refuse to believe it the majority of people both here in the U.S. and abroad do.   There might be differences of opinion on how much of a hold Putin has on him but he knows most people know there’s something to the charges and that’s got to be crippling to his ego.

It’s highly probable Trump is in debt up to his eyeballs to Putin and others and has been following Putin’s orders because of it.   Now he sees Putin (and Russia) taking the kind of heat he knows in his heart he’s never faced.   Whatever persecution he claims even he knows it’s nothing compared to the storm raining down on the would be Soviet Union 2.0.

Could it be that all of a sudden Trump believes he is off the hook?   That neither Putin or any of the others will at some point come and say it’s time to pay up?   I realize (as perhaps Trump does) that even if it takes a while Russia is going to have to suffer the humiliation of withdrawing from all, or most of Ukraine.   Worse still, unlike the hit they took both financially and diplomatically for Afghanistan the negative impacts of the mess Putin has created in Ukraine is far worse.   And far more immediate.

I’m hesitant to say when, but the moment will come when Putin will pay the price for his insistence on invading Ukraine.   An announcement (“appropriately” somber) will be made that Putin has succumbed to a massive heart attack or stroke.   It will be a tricky PR exercise for Russia to both “honor his service” yet make it understood that he screwed the pooch on Ukraine and they are very, very VERY sorry and want to make it up to everyone.   Somehow.   The fact that the malady, be it a heart attack or stroke will be induced by a 9mm bullet from point-blank range will of course be omitted from the “tragic” tale of Putin’s demise.   Or maybe instead of their classic back-of-the-head execution they will do it from the side and wrap his fingers around the gun and say he did a Hitler – as an excuse to say good riddance and as I noted beg forgiveness for letting him have all that power he abused.   Whatever.

What matters is that it seems Trump also believes Putin’s days are numbered.   He believes it strongly enough to speak publicly to try and create some distance between himself and Putin and is even doing a bit of taunting.  To US he’s just gaslighting with his “Putin would never have done this if I was President – he’d have listened when I warned him off” b.s. but Putin will hear it quite differently.   More to the point, Putin will consider it as a betrayal the same way Trump considers anyone who criticizes or challenges him as a mortal enemy no matter how much they’ve done for him.   Putin might have more pressing concerns than payback but he’s got a lot of oligarch pals, not all of whom will wind up dead like Putin or even in prison.   And never forget this – when Trump decides to get payback he sues and/or trashes someone’s reputation.   Putin also trashes people’s reputation.   He also does more, as in having them (and sometimes family) imprisoned and even murdered.   And much of the time those murders are done in manner to attract public attention as a warning to others about the cost of crossing Putin.    There are few things to be grateful for when it comes to Trump, but a huge one is that for all his attempts to portray himself as a ruthless tough guy top alpha-dog he is nothing of the sort.

Anyway Putin, his pals and his country are in a world of hurt and it’s going to get worse by the day.   They’ve already lost big and with each passing day the losses grow.   I can see how someone like Trump might start thinking that Putin (and his pals) problems are such that no one will believe them if they start talking trash about him.   Or given their other problems waste time and energy on a guy who is no longer in a position to do anything for them.   However, if Trump (and his kids) don’t think there are literal receipts, and that one or more of those Putin pals will decide to literally collect or exact retribution on Trump he’s badly mistaken.  They say the Mafia never forgets.   That applies to the Russian Mafia and it’s tonier version (Putin and his oligarchs) too.

From where I sit, even without directly saying Putin screwed up “bigly” Trump’s statements in the last day or two make it clear he is saying exactly that.   He believes much, if all his debt to Putin and his pals will melt away and be forgotten.   Intoxicated by this new freedom Trump feels emboldened to try and use this tragedy in Ukraine to his own political benefit here at home.   He’s dug himself a hole and jumped in, and being Trump doesn’t understand the old saying about the first thing to do when you’ve dug yourself into a hole is to stop digging.   Even if ole Vlad himself stood at the edge and said “Donald – you’re in deep enough trouble already and you should stop digging” Trump would throw shovelfuls of dirt up in Putin’s face.    He thinks he’s got the upper hand now and he’s wrong.

I think the time is going to come when Trump pays a terrible price for misjudging the current situation.   Wouldn’t it be sweet if the records that make it into the right hands to bury Trump come from Russia?   Of course, that assuming they don’t decide to use a more subtle means of making him go to sleep and never wake up.