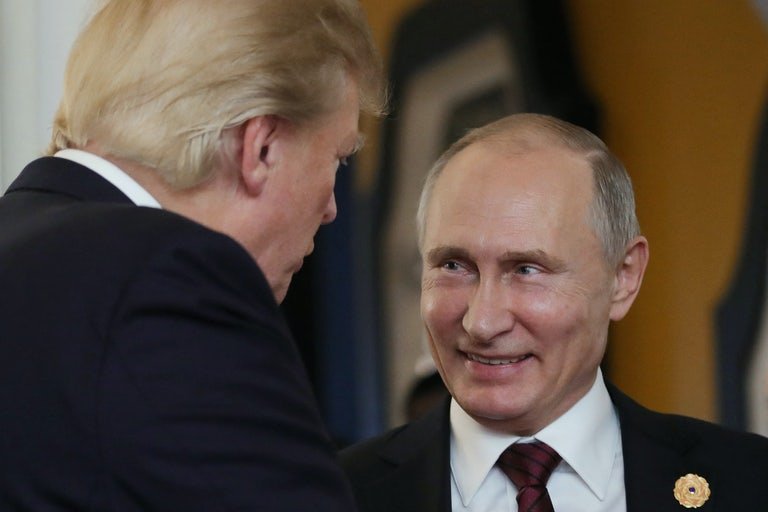 The old aphorism, “It’s truly an ill wind that blows no good” is true. And dark clouds do have silver linings. And as awful as this conflagration in Ukraine is right now, there are a few benefits coming out of it, namely that Donald Trump is becoming increasingly irrelevant.

Trump has always sounded like a complete dummy, there’s nothing new there. But he came into office at a pacific time in our history. There were no hot wars, the economy was booming, the eight prior years of Obama had been serene ones for the most part. But now, with the seriousness of the war in Ukraine, Trump is showing his true clueless colors and becoming irrelevant by doing so. He goes on Fox News and says he has all the answers for Biden, but then declines to provide even one. As George Will puts it, “He’s increasingly like a stray orange hair to be flicked off the nation’s sleeve.”

Watch the primaries. See if Trump’s endorsement carries the weight it used to. Because what we may be about to witness is the deflation of Donald Trump, before he gets blown off the world stage forever, like an old candy wrapper after the carnival leaves town. Washington Post:

His residual power, which he must use or lose, is to influence his party’s selection of candidates for state and federal offices. This is, however, perilous because he has the power of influence only if he is perceived to have it. That perception will dissipate if his interventions in Republican primaries continue to be unimpressive.

So, Trump must try to emulate the protagonist of “A Connecticut Yankee in King Arthur’s Court.” In Mark Twain’s novel, a 19th-century American is transported back in time to Britain in the year 528. He gets in trouble, is condemned to death, but remembers that a solar eclipse occurred on the date of his scheduled execution. He saves himself by vowing to extinguish the sun but promising to let it shine again if his demands are met.

Trump is faltering at the business of commanding outcomes that are, like Twain’s eclipse, independent of his interventions. Consider the dilemma of David Perdue.

He is a former Republican senator because Trump, harping on the cosmic injustice of his November loss in 2020, confused and demoralized Georgia Republicans enough to cause Perdue’s defeat by 1.2 percentage points in the January 2021 runoff. Nevertheless, Trump talked Perdue into running in this year’s gubernatorial primary against Georgia’s Republican incumbent, Brian Kemp, whom Trump loathes because Kemp spurned Trump’s demand that Georgia’s presidential vote be delegitimized. In a February poll, Kemp led Perdue by 10 points.

Perdue is probably the most glaring example of how Trump’s endorsement has turned to dross, but by no means the only one. J.D. Vance is floundering badly in Ohio. He started out groveling for Trump’s approval by saying he really didn’t care about Ukraine and then did a one-eighty, saying that Russia’s invasion of Ukraine was a “tragedy.” And if Trump needs Vance to go out and bark at the full moon to get his endorsement, he’ll do that.

Point being, Trump and Trump’s endorsement stands for one thing and one thing only: a means of elevating the freakish and the unqualified into public office, even as he himself is freakish and unqualified. Putin attacking Ukraine has changed the playing field. The situation in Europe now requires in depth understanding of foreign policy and history, not performative trolling. This is the reason that Trump and his key sycophants, Greene, Boebert, Cawthorn, are looking stupider than ever as they do their usual schickt and it falls flatter, faster than it used to.

Trump never could handle anything of gravity. There is nothing of the statesman in him. That’s why every late night comedy talk show made a meme or a mash-up of Trump’s announcement of the death of Abu Baghdadi. Here’s Jimmy Kimmel’s.

Trump is a novelty act. He never was going to be more than that, although he was a novelty act that revealed 40 years of downslide in the GOP and that’s about how long Trump has been the tabloid king as well.

Trump is an open book who has been reading himself to the nation for 40 years. In that time, he has changed just one important word in his torrent of talk: He has replaced “Japan” with “China” in assigning blame for our nation’s supposed anemia. He is an entertainer whose repertoire is stale.

Trump is about bread and circus. He came to power at a time of relative happiness and prosperity in America and he sang the song of the angry and the lost. He was a major distraction from what was important in politics and for that very reason was a major hit. Trump knew how to mainline anger in his listeners and the 2016 election became about that.

But now the game has changed, thanks to Vladimir Putin. Things have gotten real. It isn’t all performance art and political theater now. The powers of the world are in daily consultation and all eyes are on the awfulness in Ukraine, ignitied by dictator Putin.

At the end of all this, Ukraine will be free, Putin will be disgraced and Trump will be history. At least, that is my devout prayer.