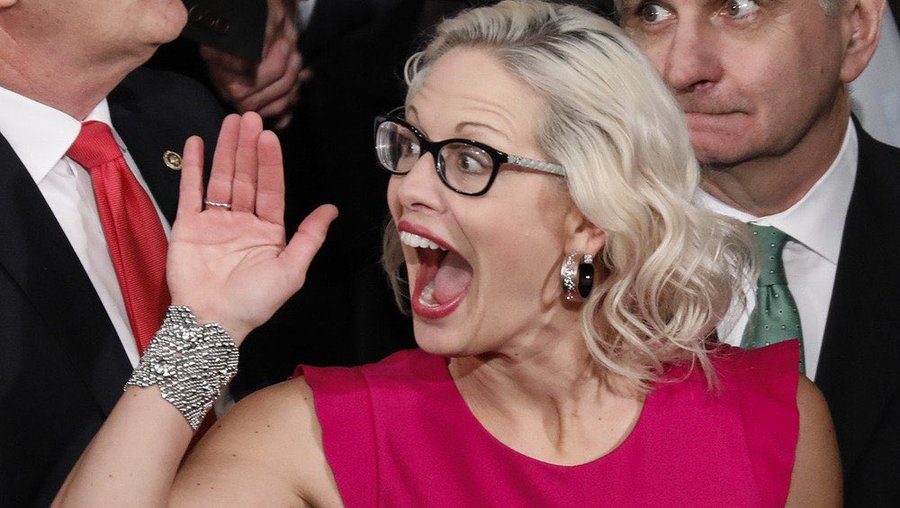 And when they do, that backward slide starts, and picks up speed like you wouldn’t believe. I know, I grew up on skates.

Arizona US Senator Kyrsten Sinema took one bite too many from the smart ass apple. She joined West Virginia Senator Judas Joe Manchin in helping to block her own party and The President from passing voting rights legislation. And the walls came a tumbling down.

This weekend was the first rapid fire response. Over the weekend, the Arizona state Democratic party voted to officially censure Sinema for abandoning the needs of her constituents by voting to block the voting rights act. But there was actually something that came before that.

After the Senate vote, former Democratic hill staffer and Indivisible co-founder Ezra Levin tweeted out that he was sorry. Sorry for the Democrats with the result, and sorry for democracy with the result. But he was not sorry for Kyrsten Sinema, who will never be elected to another Democratic seat again. This is the guy who helped to write the manual for Democratic activists to invade town halls, and district and state offices, as well as flood phone lines to get their point across.

But it just got even worse for Senator Prancy-Pants. She just made a mortal enemy of the last person an Arizona Senator who is a Democrat wants to piss off. Maria Teresa Kumar, the President and CEO of Voto Latino is a bird of highly ruffled plumage. It turns out that she and several other Latino activists had a conversation with Sinema on the morning of the vote. They brought her up to speed on the measures the AZ GOP legislature was taking to deny voting rights, and as the fastest growing population in Arizona, Latino rights must be protected.

And the rest is history. Sinema threw her and her partners double barrel birds, and voted to block voting rights protection. And as of today, Voto Latino now has a new website up, simply titled Adios Sinema. And when Kumar appeared on Rachel Maddow’s show earlier tonight, she almost gleefully pointed out that there will be another 165,000 new eligible Latino voters qualified to vote in 2024. And Maria Teresa Kumar will have their ear.

I look at this as almost poetic justice. When I look at Kyrsten Sinema, basically I see the Democratic Kanye West. A total flake, who long ago traded in her constituency for an entourage. They all kiss her ass and tell her how great she is, and in the meantime, she hasn’t visited her offices or held a public town hall in almost 4 years. What comes around goes around.