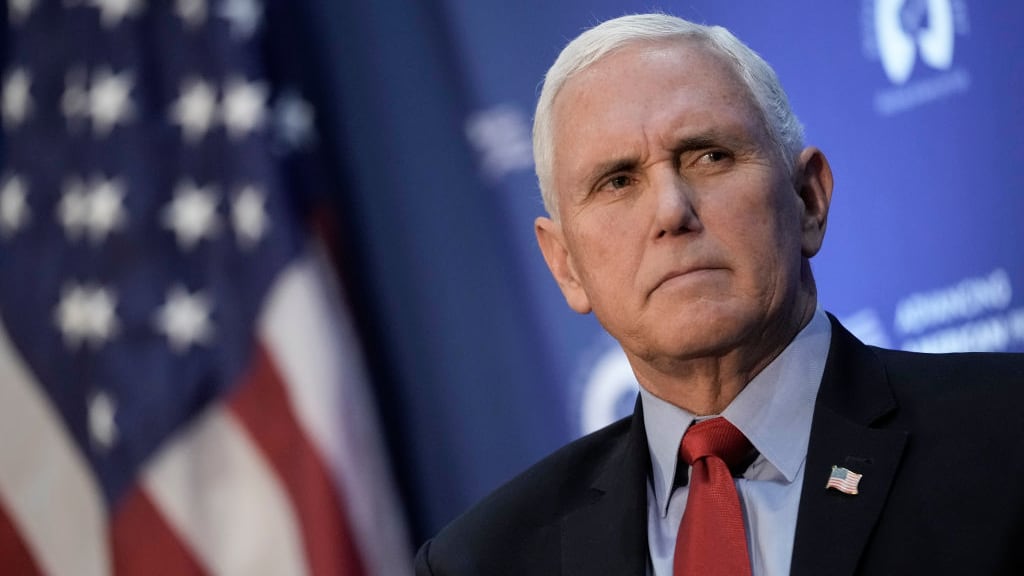 Whatever prompted Mike Pence to come out of the woodwork or from under the pew or wherever he spends his time these days, I have no idea. But show up he did, and my best guess is that he wants to remind everybody that he is a GOP leader. He wrote a tepid, sanctimonious piece in the Wall Street Journal and it is a howler, if you imagine Pence voicing it. He sounds like an entry-level prosperity consciousness preacher who fancies himself a moral leader of the caliber of the Pope.

What’s even funnier is that Pence “reveals” certain things, the most comical being his “confrontation” with Donald Trump where they had their last man to man conversation. I believe this like I believe pigs fly, knowing how livid and lost in denial Trump was in the final days.

But, we are told, it’s all there and more in Pence’s book. It’s part of his memoirs and in his mind, at least, a part of history, as opposed to a watered down version of embarrassing facts which have already been reported on by far more credible and better writers than Mike Pence. Like True Confessions, the narrative moves in a day to day linear fashion, and also like True Confessions, where the girl confesses to losing her virtue one sordid incident at a time, Pence confesses that yes, the situation quickly spiraled out of control, but it wasn’t his fault. Wall Street Journal:

In a Dec. 5 call, the president for the first time mentioned challenging the election results in Congress. By mid-December, the internet was filled with speculation about my role. An irresponsible TV ad by a group calling itself the Lincoln Project suggested that when I presided over the Jan. 6 joint session of Congress to count the electoral votes, it would prove that I knew “it’s over,” and that by doing my constitutional duty, I would be “putting the final nail in the coffin” of the president’s re-election. To my knowledge, it was the first time anyone implied I might be able to change the outcome. It was designed to annoy the president. It worked. During a December cabinet meeting, President Trump told me the ad “looked bad for you.” I replied that it wasn’t true: I had fully supported the legal challenges to the election and would continue to do so.

I don’t think the Lincoln Project was setting Mike Pence up by “implying” that he could change the outcome. They were stating the obvious at the time, that by going along with his constitutionally mandated duty, Pence was “putting the final nail in the coffin,” the coffin being Trump’s delusional notion that Pence could do anything differently. If Pence has a beef with anybody, it’s with Donald Trump, not the Lincoln Project.

On Dec. 23, my family boarded Air Force Two to spend Christmas with friends. As we flew across America, President Trump retweeted an obscure article titled “Operation Pence Card.” It alluded to the theory that if all else failed, I could alter the outcome of the election on Jan. 6. I showed it to Karen, my wife, and rolled my eyes.

He rolled his eyes. But did he take an opportunity then and there to write an op/ed to the Wall Street Journal and make it crystal clear that he had no such power to do what Trump asked? Nope.

Then Pence sets himself up as Mr. Honest. That may be another purpose of this op/ed, to be up there with Honest Abe and maybe George Washington as well.

Pence describes how on New Year’s Day the phone rang and Louie Gohmert told him he was filing a lawsuit, asking a federal judge to declare that Pence had “exclusive authority and sole discretion” to decide which electoral votes should count.  Then he goes on to say Trump told him, “I don’t want to see ‘Pence Opposes Gohmert Suit’ as a headline this morning,” But Pence stood up to Trump and said he did oppose it, we are told. “If it gives you the power,” he [Trump] asked, “why would you oppose it?” Pence replied that he told Trump one more time, as he had in the past, that “I didn’t believe I possessed that power under the Constitution.”

Now he goes after Eastman.

On Jan. 4, the president’s chief of staff, Mark Meadows, summoned me to the Oval Office for a meeting with a long list of attendees, including the legal scholar John Eastman. I listened respectfully as Mr. Eastman argued that I should modify the proceedings, which require that electoral votes be opened and counted in alphabetical order, by saving the five disputed states until the end. Mr. Eastman claimed I had the authority to return the votes to the states until each legislature certified which of the competing slate of electors for the state was correct. I had already confirmed that there were no competing electors.

Mr. Eastman repeatedly qualified his argument, saying it was only a legal theory. I asked, “Do you think I have the authority to reject or return votes?”

He stammered, “Well, it’s never been tested in the courts, so I think it is an open question.”

At that I turned to the president, who was distracted, and said, “Mr. President, did you hear that? Even your lawyer doesn’t think I have the authority to return electoral votes.” The president nodded. As Mr. Eastman struggled to explain, the president replied, “I like the other thing better,” presumably meaning that I could simply reject electoral votes.

On Jan. 5, I got an urgent call that the president was asking to see me in the Oval Office. The president’s lawyers, including Mr. Eastman, were now requesting that I simply reject the electors. I later learned that Mr. Eastman had conceded to my general counsel that rejecting electoral votes was a bad idea and any attempt to do so would be quickly overturned by a unanimous Supreme Court. This guy didn’t even believe what he was telling the president.

I guess that’s as close as Pence is willing to go to talk about what an actual sleaze bag Eastman was. If there are details about Eastman’s other connections, i.e., with Ginni and Clarence Thomas, I guess we’ll have to buy the book to find out.

The narrative then switches to a very lukewarm and boring rendition of the riot at the Capitol. But then he gets to this last scene with Trump, the man who sicced the mob on him.

I met with the president on Jan. 11. He looked tired, and his voice seemed fainter than usual. “How are you?” he began. “How are Karen and Charlotte?” I replied tersely that we were fine and told him that they had been at the Capitol on Jan. 6. He responded with a hint of regret, “I just learned that.” He then asked, “Were you scared?”

“No,” I replied, “I was angry. You and I had our differences that day, Mr. President, and seeing those people tearing up the Capitol infuriated me.”

He started to bring up the election, saying that people were angry, but his voice trailed off.

I told him he had to set that aside, and he responded quietly, “Yeah.”

I said, “Those people who broke into the Capitol might’ve been supporters, but they are not our movement.” For five years, we had both spoken to crowds of the most patriotic, law-abiding, God-fearing people in the country.

With genuine sadness in his voice, the president mused: “What if we hadn’t had the rally? What if they hadn’t gone to the Capitol?” Then he said, “It’s too terrible to end like this.”

On Jan. 14, the day after President Trump was impeached for the second time, I stopped by the Oval Office. The night before, he had unequivocally denounced the violence at the Capitol and called for calm and national unity. I congratulated him on his address. “I knew you’d like it,” he said. He seemed discouraged, so I reminded him that I was praying for him.

The only part of this that I believe is the “don’t bother.” The rest is horseshit. A faint-voiced Trump weakly agreeing with Pence? Oh, puh-leeze. Not after all the other versions I’ve read which depict a red-faced, screaming, ketchup bottle throwing Trump having meetings with Sidney Powell and Rudy Giuliani in the wee hours, while White House counsel looks on appalled and the Attorney General resigns and storms out in the pouring rain. That I find believable, not this pap.

One pattern that is emerging today, post election, is that the Big Lie is dead. This is another nail in that coffin. It may not be the final one. I think the final one will be when Trump is either not nominated in 2024 or is nominated and then beat. But all the signs are there, most emphatically all of the MAGA candidates who went down in flames last night and who just simply conceded. The Big Lie, like every other legend or tradition, can only live if people keep it alive. Nobody would last night. That repudiation of the Big Lie was a repudiation of Trump, make no mistake.