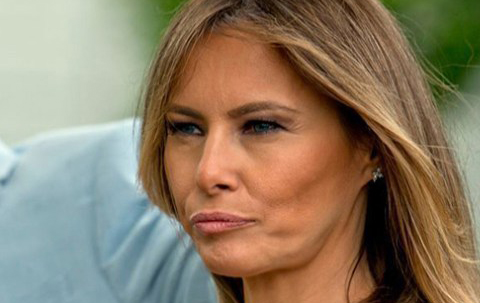 Trumps and charities don’t go well together, especially children’s charities, although this is nowhere as bad as stealing from kids with cancer. It appears that the latest member of the family to grow philanthropical wings, Melania Trump, is in hot water for claiming that an event that she’s hosting in April will be providing charitable donations for kids to become educated in technological skills. The ads are out, the tickets being sold, but there’s no sign of a charity in sight.

NEW: Melania Trump is being investigated for skirting charity laws in Florida for selling tickets to a meet and greet — a portion of the proceeds went to a charity that does NOT appear to exist.

That drew this response.

Dishonest reporting at it again. Everything has been done lawfully, & all documents are in the works. Read with caution-typical corrupt media.

We are working w/Bradley Impact Fund, a Donor-Advised Fund, to select charities that will receive the donations to foster children. https://t.co/5ZKr5SwIZz

Um…so is this how you do it? You put together a gala bash, sell lots of tickets, collect the money and what about that portion going to charity — oh, darn, we forgot the charity!! Well, let’s fix that now. Let’s go out and find a charity. How intriguing that there was no rush to dot all the eyes and cross all the tees until she started getting investigated.

And the question that is still unanswered is? how much are the foster kids getting and how much is Melania pocketing?

Melania also made the news a few days ago because her “millinery masterpiece” of a white hat that was up for auction remained there unbought until she bought it herself. Or, at least, it appears that she bought it herself, because the money to pay for it came out of her digital wallet. VICE:

In other words, the winner of Melania Trump’s NFT got the money from none other than the creator of the NFT itself, and an address linked to the NFT creator got the money back.

Motherboard shared the blockchain records with pseudonymous independent blockchain sleuth zachxbt, who shared the following analysis confirming that the crypto for the winning bid was provided by the NFT creator:

If we visit Solscan.io (a Solana Blockchain Explorer) we see Melania Trump’s Head of State Collection, 2022 NFT was created on 01/11/2022 by 39ui using Metaplex.

Given that the cryptocurrency for the purchase was provided by the NFT creator, and sent back to an address associated with the NFT creator, the only realistic option (assuming the mystery buyer story is true) is that the buyer does not use cryptocurrency and sent Trump’s camp dollars to complete the entire transaction with, which it did on their behalf. “Not impossible,” zachxbt said in a message, “but a weird request.”

But this doesn’t explain the bizarre chain of transactions and multiple wallets, including Address X (which zachxbt referred to as “3CTu”), which ultimately received the funds, or why the winning bid of a public crypto auction was facilitated by the creators of the auction and turned out to be the exact minimum amount.

“Why was 3CTu needed? Why would [the auction winner] send the exact amount for a winning bid? Why was the money sent back to 3CTu? All my unanswered questions…” zachxbt wrote.

Could the reason be that Melania didn’t want to look foolish auctioning off some treasure that nobody wanted and so it would just sit there, unless she made the appearance that it was in fact coveted and high money was paid for it? Just a thought.

And maybe the same motivation is running her children’s charity event in April? Maybe she had no intention of including children’s charities until she got busted, in essence. We’ll never know, but I think it’s safe to say that the charitable nature of the event was not first and foremost in her mind since she didn’t even bother to address that aspect at all until she came under investigation for it.

And this is vintage Trump behavior. New York Times:

In early December, Donald J. Trump put on a tuxedo and boarded the private jet of a scrap-metal magnate and crypto-miner for a short flight across Florida, touching down at an airport in Naples. There, a long red carpet marked the pathway into a Christmas-decorated hangar filled with supporters of Mr. Trump who had paid $10,000 to $30,000 for the privilege of attending a party and taking a photo with him.

The event had all the trappings of a typical high-end fund-raiser: a giant American flag, a lectern, chandeliers and an open bar. Frank Stallone’s band provided the music; an anti-Biden “Let’s Go Brandon” banner hung from the rafters.

But the money raised did not go to Mr. Trump’s political operation. Instead, Mr. Trump’s share of the evening’s proceeds went straight into his pocket, according to a person familiar with the arrangement.

Multiple attendees said they bought their tickets from a private company, Whip Fundraising, whose founder, Brad Keltner, has asserted that “the lion’s share” went to charity. But the website advertising the event listed no charitable cause. And Mr. Keltner, reached by phone, declined to discuss how money was distributed.

That’s how they do it in Trump world. Talk about charity, then pocket the money. Maybe Melania is getting more into money raising herself these days because she’s getting an inkling of how far down Donald’s fortunes could descend. Just a thought.