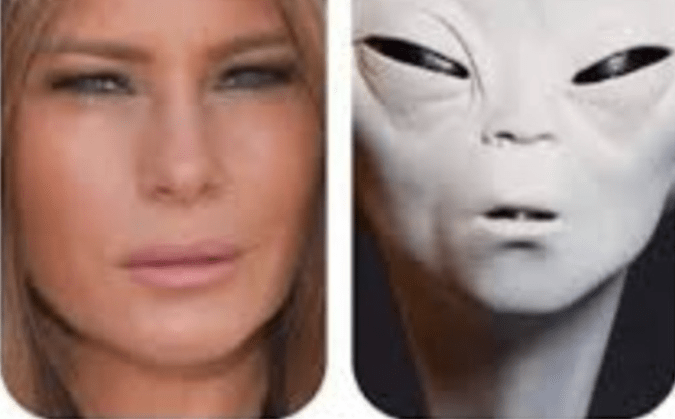 Like a trail of breadcrumbs, small signs are appearing here and there that the twice impeached, one term president might be adding thrice divorced to his list of descriptors, because nobody has seen his wife since Mother’s Day. She’s doing a Greta Garbo. First of all, Michael Cohen cracked wise a couple of weeks ago, “Nobody’s seen Melania. She and Barron might be up in the space shuttle with Jeff Bezos for all we know.” Then the real tell was she didn’t show up to Donald’s 75th birthday. But then neither did Ivanka or Eric and their spouses. Why bother? Trump’s out of the White House and they’re trying to save their own butts. Ironically, Donald Jr. and Kimberly made an appearance and Junior is predicted to be the first one under the bus when the kids start flipping on each other.

No, Trump spent his birthday with the likes of sycophant Lauren Boebert and Jim Banks, who’s an obscure Indiana congressman. Now ask yourselves, friends, who among us has a 75th birthday party, a milestone birthday, and the only people to attend are new acquaintances from work, while family shines you on? I don’t know of a soul I can say that about other than Donald Trump.

Now of course the fact that Melania didn’t show at the birthday party is being taken as a sign of a rift in the marriage, but I don’t think so, since Jarvanka also said FU and spent the time leaking to the press about the revisionist history book that Jared is writing to gaslight people that he gave really great advice to Trump but Trump ignored it and went his own direction on COVID, etc. The chances of that being believed are zilch. But Jarvanka has to try because they’ve got to get back in the graces of high society, or bust. My prediction is bust. They’re hated in New York.

Then this interview snippet from Newsmax is the icing on the cake and is what got Melania trending on Twitter today. (The entire clip is at the bottom of this piece.)

When Newsmax asked Trump what Melania does all day he said, "She's low-key but not actually low-key." Translation: "I haven't seen her since the Capitol riots but she's been using her credit cards" pic.twitter.com/T4JuZup7Lt

When Trump makes a complete non sequitur like that, it means he doesn’t have a clue. Remember the famous clip where he’s being asked about his favorite biblical passage? He hems and haws and says “It’s a private thing.” He never cracked the cover of the Bible and wouldn’t unless you told him there was something useful in it like hookers’ phone numbers.

You know what occurred to me? Bill Gates is single now and he’s got a shitload more money than Trump, she ought to get with him. Gates can afford to build her a mansion like Vladimir Putin’s got — on Mars, even.

Here is the clip of the Newsmax interview and as you will see Trump is asked “what is Melania doing?” and his reply is non responsive. He talks about her modeling career, her character, and hilariously, how she “rebuilt the Rose Garden…..like the dashboard of a Boeing 757.”

“If Trump goes to jail, will Melania wait for him?”

A real class act, the Trumps. At least we know one thing. Jill Biden will not be displaying her nipples on the 4th of July. And she wore hose when she met the Queen of England. Melania presented herself to the Queen barelegged, like a Piccadilly tart.