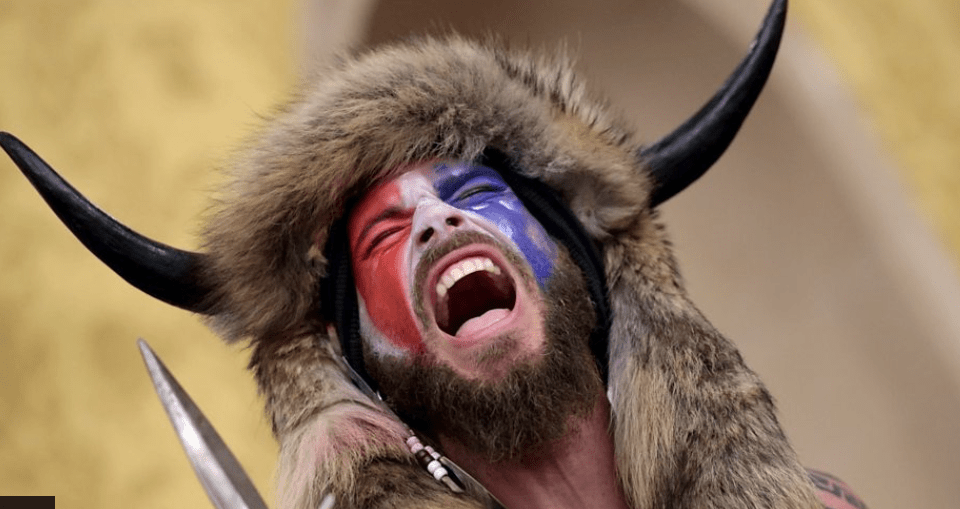 Into this bevy of contradictions and confusion, a digital voice amassed an audience, claiming to have answers about the vaccine, the talk show host, and the true nature of life on this planet. Q found the out of work, the weary, the quarantined masses yearning to make contact with other human beings and s/he exploited their vulnerabilities. It was A Beautiful Mind without the math, just the compulsive insane predictions, first appearing on 4Chan and then sharpied onto a white board with all roads leading to MAGA’s savior, Donald Trump.

Where you found Q you found MAGA. As time went on, the Venn diagram overlapped even more.

Then Q went silent. The masses squirmed. They held vigils in Dealey Plaza, waiting for a dead president and/or his dead son to resurrect from the dead and lead them. And as crazy as that sounds, it is going to get crazier still. Wired:

Cult-like extremist movements appear to provide an antidote to the potent mixture of isolation, uncertainty, changing narratives, and fear we have experienced during the pandemic by offering a skewed form of safety, stability, and certainty, along with a cohort of people who are just like us, who believe us and believe in us. As the activist David Sullivan—a man who devoted his life to infiltrating cults in order to extricate loved ones from their grip—pointed out, no one ever joins a cult: They join a community of people who see them. […]

Historically, cults have flourished in times of flux, when behavioral norms shift and stability is elusive. If anything has characterized 2021, it has been the sense of constant displacement engendered by a novel disease. We have all experienced endlessly changing official narratives and communication strategies about Covid-19. We have also seen death tolls continue to rise and social institutions break under the strain. This will resume in 2022, despite our hopes that the pandemic would be relegated to the past. Even the least extremist-minded of individuals will struggle to maintain their equilibrium.

Added to that instability is the sense of isolation we have all experienced in 2021, and extremism feeds on this kind of exclusion and loneliness. In the early days of this year, we have already seen people denied social contact because of lockdowns, and some have turned instead to the most improbable of alliances, looking for groups that will validate and channel their anger and frustration.

This will continue to be the case. It’s difficult for the human mind to deal with uncertainty during the best of times. We crave certainty and hard numbers—not evolving knowledge and statistical caveats. And this is far from the best of times. “They are lying to us!” is the battle cry of conspiracy theorists. In 2022, this will grow in volume and lead to an explosion of extremist activity.

It’s only the first week of 2022, but take a listen to Jacob Chansley, the QAnon Shaman, who has changed his name apparently, to Jake or Jacob Angeli. At least that’s the name on the chyron under his picture. Listen to the fifties sci fi-esque drivel that he claims is reality. You’ll wish you were still talking about the international cabal of pedophiles.

Chansley, aka Angeli, aka QAnon Shaman, aka Yellowstone Wolf, aka Loan Wolf is another character out of this Twilight Zone episode we’re living in. He joined the Navy after high school in 2005. After boot camp and training as a supply clerk, he refused to take the anthrax vaccine and was summarily processed out of the Navy. After two years in uniform and having attained the rank of Storekeeper Seaman Apprentice he was discharged and he became an author. He self-published two books: Will & Power: Inside the Living Library (Volume 1), published in 2017 under the pen name Loan Wolf; and One Mind at a Time: A Deep State of Illusion, published in 2020 under the name Jacob Angeli.[19] He produced and narrated 11 videos espousing various conspiracy theories and uploaded them to the platform Rumble in late 2020.[23]

Angeli also had a profile on the Backstage website seeking work as an actor, before he cast himself in his street theater role and became internationally recognized overnight. Not bad for a first role.

His highest educational attainment is some classes at Glendale Community College where he studied psychology, religion, philosophy, and ceramics. Despite this seemingly modest educational and professional background, Angeli would have you believe that he knows things that only people with Top Secret security clearances know, and not all of them, by any means. If that seems like a reasonable proposition to you, then you qualify for admission into the cult. Willing suspension of disbelief is the only requirement for membership, although downright stupidity and gullibility are preferred.

Angeli/Loan Wolf (say, do you suppose that these are not aliases but maybe the names of his “alters” like Herschel Walker? Just a thought) is in the House of Many Doors these days, where he gives interviews, as you’ve seen, and characterizes himself as a martyr, specifically Mahatma Ghandi, Martin Luther King Jr. and Jesus Christ. He is in administrative segregation for his own safety, but he hates it and says he’s sprouting white hair all over his body, he’s so unhappy.

He likened the segregation to “soft torture” and said that the stress of being in prison and solitary confinement has caused him to develop white hair all over his body.

He told the podcast hosts he’s not allowed access to the internet but has kept up to date on topics such as Kyle Rittenhouse’s trial by listening to the radio on a walkman.

Watkins previously said that Chansley was bipolar and suffered from schizophrenia, which Chansley denied on the podcast.

Podcast host Joe Oltmann ended the segment by describing Chansley as a “patriot” who is “not crazy.”

Oltmann has ramped up his extreme rhetoric in recent weeks, calling for the mass execution of politicians he viewed as “traitors.”

And the mass arrests and executions are coming, not to worry. This *prophet* has seen them in a vision.

QAnon conspiracy theorist Dave Hayes (aka "The Praying Medic") has no time for all "the doubtfags" who say the mass arrests are never going to happen because "God has already shown me the end of this": "I have zero doubt that these people are going to be held accountable." pic.twitter.com/ibGjFC7Z4A

What you saw all this past week was members of the Republican party and right-wing media trying to whitewash and memory hole the riot at the Capitol. The only Republicans who stood on the floor of the House for the minute of silence were Liz Cheney and her father Dick.

Color me apprehensive as hell that things are going to get better before they get worse. What you’ve seen above is what worse looks like. The crazies have always been with us, that’s part of life, but I have never seen this level of organization nor anger, and I certainly have not seen the backing of a major political party behind this kind of thing before now.

Here’s the bottom line: Fox News exists because of billionaire Rupert Murdoch. OAN exists because of funding from corporate giant AT&T. Check the sources of all of the subversive right-wing outlets and you find monied backers who see their way clear to destabilize America. We’re not looking at a few people previously known as the lunatic fringe, we are talking about an entire anti-American movement.