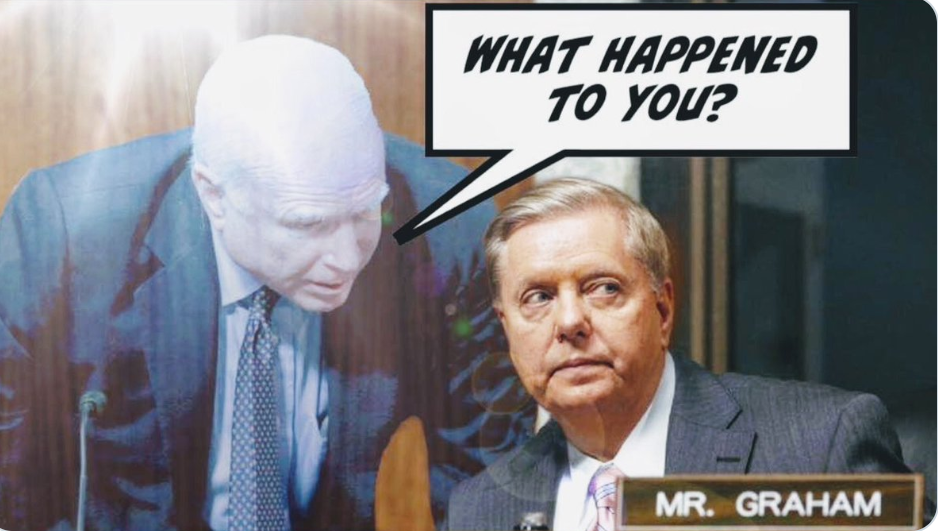 Probably the two people in Washington who wonder the most about what happened to Lindsey Graham are Joe and Jill Biden. The Bidens and Graham were close friends for many years. Last night Graham put a knife in Biden’s back by making comments which enabled Vladimir Putin to take the stance that he is at war with the United States, rather than the architect of an unprovoked attack on Ukraine.

The strangeness of Graham’s attack, particularly the violent wording, took everyone aback. Here are the details from the Wall Street Journal.

Sen. Lindsey Graham (R., S.C.) said Thursday night that Russian President Vladimir Putin should be assassinated by his own people, suggesting it would be the only way to end the crisis precipitated by the Russian invasion of Ukraine.

Mr. Graham first made the assertion during an appearance on Sean Hannity’s show on Fox News. He then repeated the comment on Twitter, referencing both the betrayer of Julius Caesar and the architect of an unsuccessful 1944 plot to kill Adolf Hitler.

“Is there a Brutus in Russia? Is there a more successful Colonel Stauffenberg in the Russian military?” he asked. “The only way this ends is for somebody in Russia to take this guy out. You would be doing your country – and the world – a great service.”

In a subsequent tweet he added: “The only people who can fix this are the Russian people. Easy to say, hard to do. Unless you want to live in darkness for the rest of your life, be isolated from the rest of the world in abject poverty, and live in darkness you need to step up to the plate.”

Both the United States and NATO are supporting Ukraine from outside. It has to be that way. If NATO and/or the U.S. directly oppose Putin’s army in Ukraine, that could conceivably lead to the Russian people getting behind Putin, which they are not at this time. This is Putin’s war, not Russia’s. But if NATO would declare itself at war with Russia, that could change the dynamic.

Same with the U.S. And yet there was Lindsey Graham last night, incredibly shooting off his mouth to the amazement of one and all.

Was he trying to support Putin in starting a war against NATO, which would engulf all of Europe? Heather Cox Richardson:

It was an astonishing moment… and also an interesting one. It undermines the position of the U.S. and our partners and allies, but in whose service? After initially opposing Trump’s reach for the presidency, Graham threw in his lot utterly with the former president, who has many possible reasons both to undermine Biden and to keep Putin in power. Perhaps Graham’s comment was intended to help Trump. Or perhaps Graham might have simply made a colossally stupid mistake. Whatever the case, the enormous implications of his statement make it one that would be a mistake to ignore.

Graham was not the only one to bolster Putin’s position today. Tucker Carlson tonight told his audience that indeed he was wrong in his earlier defense of the Russian president but then continued to stoke the same racist and sexist fires he has fed all along, blaming his misreading of the situation on Vice President Kamala Harris.

Today the U.S. imposed sanctions on Russian media outlets, as well as some of those involved with them, that worked to “spread Russian disinformation and influence perceptions as a part of their invasion of Ukraine.”

Closer to home, a federal court in the Southern District of New York charged John Hanick with violating U.S. sanctions and making false statements concerning his years of work for sanctioned Russian oligarch Konstantin Malofeyev. Malofeyev was key to destabilizing Ukraine in order to support a Russian takeover. Hanick worked for him from 2013 until at least 2017, establishing TV networks in Russia, Bulgaria, and Greece to spread destabilizing messages.

Hanick was one of the founding producers of the Fox News Channel. He became an admirer of Putin because of the Russian leader’s anti-LGBTQ stance and his belief that Putin was a devout Christian. Apparently, he turned that enthusiasm into an attempt to undermine democracy in favor of Putin’s authoritarianism.

Yesterday, Attorney General Merrick Garland announced a new interagency law enforcement task force, KleptoCapture, dedicated to enforcing sanctions, export restrictions, and economic countermeasures the U.S. and its allies and partners have imposed to respond to Russian aggression. In a statement, about the Hanick indictment, U.S. Attorney for the Southern District of New York Damien Williams said, “The indictment unsealed today shows this office’s commitment to the enforcement of laws intended to hamstring those who would use their wealth to undermine fundamental democratic processes.”

I for one don’t think Graham made a colossally stupid mistake. I think it was a deliberately thought out comment to ensure the result that was achieved, which is giving Putin a propaganda coup.

It’s tragic, to say the least, that we have a member of the United States Senate who is doing the work of, if not actually on the payroll of, a dictator who is an enemy of both the United States and democracy.