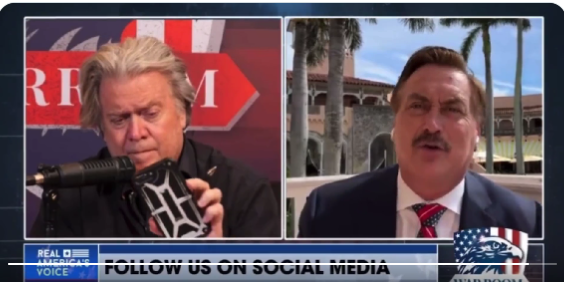 There are some great lines in the two clips you’re about to see. At one point, Mike Lindell declaims that Doug Mastriano’s election was “front loading.” Like a washing machine? Whut?

Steve Bannon, as you can see from the image above, has had better days. I don’t know what he’s got in his hand. It sorta kinda looks like a pencil cup and maybe that’s where he kept the key to the rest of his booze. He looks like he could use a stiff one right about now and we certainly don’t blame him.

Bannon has a lot on his mind. He’s going to lose his appeal and then have to serve his prison sentence of four months and he can’t do his podcast from the House Of Many Doors. So he’s going to lose traffic and who knows where a fickle right-wing audience will go when he’s out of it? Meanwhile, Bannon’s stuck listening to this dummy, because he’s a big advertiser.

Lindell is at Mar-a-Lago, and claims he has the proof that Kari Lake and Blake Masters won: “They’re absolutely caught. They’re gonna be sworn affidavits. I don’t think there’s a judge in this country that can’t say we need a new election in AZ. You can’t certify this election!” pic.twitter.com/yIa9Kzlmhz

Lindell is a key part of the MAGA ecosystem. He feeds it from both ends. He’s an advertiser and a pundit.

Mike Lindell was losing what’s left of his mind as the Kari Lake results came in: “How did these all get taken? Why wasn’t there a red wave? You can only have one answer – computer manipulation.” pic.twitter.com/aDM3RElTnt

And Lindell is at Mar-a-Lago for the big event. All of MAGA is gathered to bend the knee.

At Mar-a-Lago, My Pillow’s Mike Lindell says the worst thing that could have happened in the midterms was a “red wave” because then nobody would take his claims of faulty voting machines seriously. pic.twitter.com/vDTf3l28lk

Let’s see if Melania shows up at Trump’s side tonight. Or, let’s see if Trump announces a running mate. Let’s see if Elise Stefanik is there. Let’s see if Kari Lake is there and if she and Stefanik get into a bitch slapping contest on the beach. Anything’s possible.