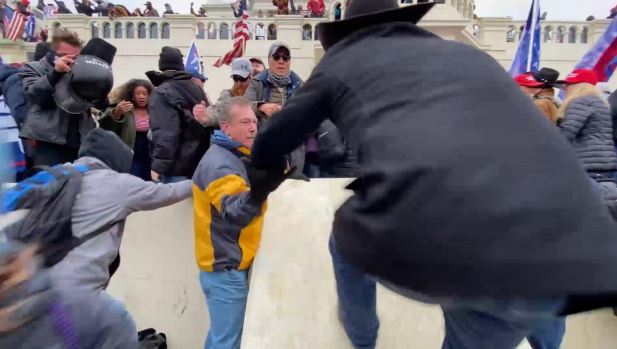 Isn’t this an interesting development? A New Mexico judge ordered the removal of Otero County Commissioner Couy Griffin from office, effective immediately, ruling that the attack on the Capitol was an insurrection and that Griffin’s participation in it disqualified him under Section 3 of the 14th Amendment. The last time this happened was 1869 and this is the first time it has happened with respect to the January 6 insurrection. Griffin is also the founder of Cowboys For Trump. CREW:

“This is a historic win for accountability for the January 6th insurrection and the efforts to disrupt the peaceful transfer of power in the United States. Protecting American democracy means ensuring those who violate their oaths to the Constitution are held responsible,” said CREW President Noah Bookbinder. “This decision makes clear that any current or former public officials who took an oath to defend the U.S. Constitution and then participated in the January 6th insurrection can and will be removed and barred from government service for their actions.” […]

“Judge Mathew’s decision is fully supported by the facts and the law and justice achieves a needed measure of accountability,” said Freedman Boyd Hollander and Goldberg P.A Partner Joe Goldberg.

“The Court’s findings that Mr. Griffin engaged in repeated efforts to mobilize a mob and incite them to violence on January 6, 2021 amply support the Court’s conclusion that he is unqualified under the Fourteenth Amendment to hold public office,” said Daniel Small of Cohen Milstein Sellers & Toll PLLC.

An eyewitness to Griffin’s behavior testified that Griffin also took on a leadership position within the mob at the Capitol on January 6th. Videos of Griffin’s speeches en route to Washington, DC for the “Stop the Steal“ rally showed Griffin’s willingness to stop, by any means necessary, a Biden presidency. In the days after the attack, Griffin continued to defend the insurrection, boasted about his involvement, and suggested a possible repeat of it in the future. Following a federal indictment for his behavior, he was convicted of breaching and occupying restricted Capitol grounds.

“January 6, 2021 was a dark day in our history. The court’s ruling today is a historic moment for our country. Mr. Griffin’s removal and bar from holding office again is a step towards obtaining justice and restoring the rule of law,” said Dodd Law Office, LLC President Christopher Dodd.

Look for there to be some major blowback. This could open up the floodgates and the right-wing doesn’t want that.