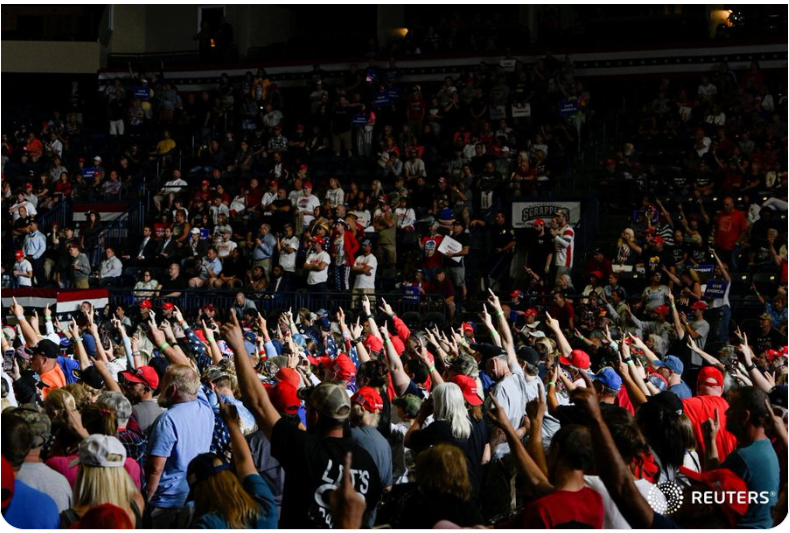 Saturday night was quite the watershed in Trumpian politics. It provided a signpost to where MAGA is going and that is straight down the QAnon rabbit hole. You could call it “the marriage of true minds” if either faction had a mind. Think of it more as the marriage of one wit, MAGA and QAnon being the half wits that they are.

Per usual, Trump faked the size of the crowd, which was a modest sized one, which he bragged into grandiosity. But there were a few new touches, which should not be ignored. The fascist salute is first and foremost something to look at, coupled with the grim, funeral tone of the proceedings, and a new theme song.

A lot of comparisons are being made between Nazi Germany and Saturday night in Youngstown.

The people at Nazi rallies in the 1930s were told their country was going to hell, their leaders were weak, there were forces secretly controlling the govt behind the scenes, and only one man could save them leading a nationalist movement to fight the socialists and communists.

That is fact. And that is where we are. Lincoln Project sees it for what it is. I have no doubt that we will see more commentary from them on this topic, but this is what their initial take was.

The new way to point at a fascist. pic.twitter.com/OVAPaFEl5S

The extended finger also is reminiscent of QAnon, not to mention Hitler’s brown shirts, and now we find out ISIS as well.

Interesting commentary, when the front runner for the GOP adopts a symbol of an organization which the FBI has characterized as a domestic-terror threat in an internal memo.

Actually, that’s the Tawhid hand gesture that ISIS use. Wonder if they know that #MAGA https://t.co/syAvH0iHgR

While speaking in Youngstown … Mr. Trump delivered a dark address about the decline of America over music that was all but identical to a song called “Wwg1wga” — an abbreviation for the QAnon slogan, “Where we go one, we go all.” As Mr. Trump spoke, scores of people in the crowd raised fingers in the air in an apparent reference to the “1” in what they thought was the song’s title. It was the first time in the memory of some Trump aides that such a display had occurred at one of his rallies.

For its part, Trump’s political operation denied that it was making any direct outreach to adherents of the mass delusion, telling the Times that aides simply used “a royalty-free song from a popular audio library platform.”

Maybe so. But there is a larger context to consider.

Trump generally tried to strike a balance with QAnon devotees — the Times referenced “a winking relationship” — in which he would neither denounce nor explicitly embrace the lunacy. It was about two years ago when the then-president, speaking from behind a White House podium, said he didn’t know much about the deranged theory or its followers, “other than I understand they like me very much, which I appreciate.”

After winking at QAnon for years, Donald Trump is overtly embracing the baseless conspiracy theory, even as the number of frightening real-world events linked to it grows. On Tuesday, using his Truth Social platform, the Republican former president reposted an image of himself wearing a Q lapel pin overlaid with the words “The Storm is Coming.” In QAnon lore, the “storm” refers to Trump’s final victory, when supposedly he will regain power and his opponents will be tried, and potentially executed, on live television.

The wink wink nudge nudge phase is over. Trump is openly embracing this nutso theory, which includes ideas that he is secretly at war with Hollywood celebrities, cannibals, Satanists who torture children for adrenachrome cocktails, and my favorite, that he’s still in the White House and Joe Biden is broadcasting from a movie studio. It is pure madness.

It is also fascism on American soil.