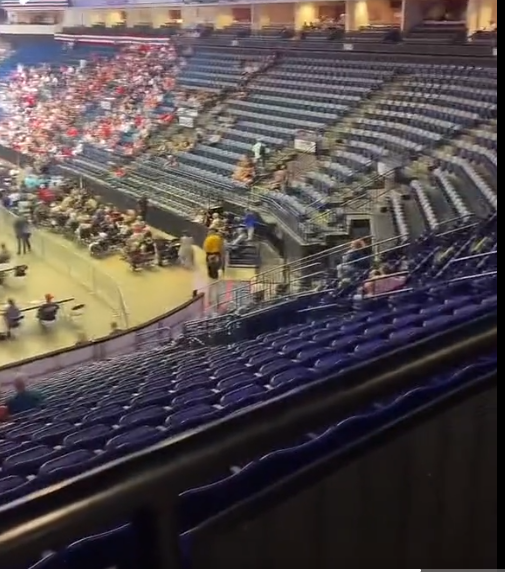 No wonder Donald Trump took the stage almost one hour late on Saturday night in Youngstown, Ohio. He hates to go on unless the place is “packed” and he had told all of his cult followers on Truth Social that the venue was “sold out.”

If it was sold out, the ticket buyers either came down with the same illness on the same day, en masse, or maybe they just wanted to make Trumpty happy by buying a ticket they never intended to use, while they went to the Ohio State football game the same night.

In any event, this venue holds 5,900 people, we are told. You’ll see how the crowd is all jammed at one end, to make the place look like standing room only. Right, SRO. You could have had another football game Saturday night with all the room that was there from unbought MAGA tickets.

It’s amazing what you can do with crowd size. I recall reading Roger Corman once say that he “did the Trojan wars with two guys and a bush.” Trump could use that same kind of staging and showmanship.

Say, that’s what Trump needs to do. He needs to get the likes of Roger Corman and John Carpenter on board to work their low budget magic with MAGA. Damn, what I wouldn’t give to see that. “They Live” — all wearing MAGA hats, when you put on the glasses and see their true faces.

We are looking at those massive crowds, Donald. That’s exactly what we’re doing.

For those of you curious about how tRump stages optics at his rallies to create a false impression of a large enthusiastic crowd behind the podium, here's what it really looked like. tRump's crowd size is an optical illusion. As big a lie as anything else is about tRump. pic.twitter.com/x2NEpjp6ql

Vance told the crowd prior to Trump’s speech: ‘We need to get back to the policies of the real Donald Trump, not fake Tim Ryan pretending he’s someone he’s not.’

The Hillbilly Elegy author accused Ryan of lying to voters about his stance on certain issues including defunding the police. Ryan has stated that he does not support efforts to defund law enforcement.

The Democratic candidate has also accused Vance of being being in favor of defund the police efforts.

Vance took aim at Ryan’s stance on gas powered vehicles saying: ‘You should be able to drive whatever the hell car you want because this is America and we believe in freedom.’

He accused Ryan of pretending to be a moderate adding that the congressman ‘votes with Joe Biden 100 percent of the time.’

Vance added: ‘We need to kick DC Tim to the curb, make him go back home and get a real job for once.’

A week ago today there was a statistical tie. Tim Ryan may in fact pull this off.

Roughly 6% of voters were undecided.

It’s anybody’s guess at this point. One rally held the same night as a major sporting event is not the determinant of what will happen. But it is vintage Trump that no matter what the facts are, he paints everything as a dazzling success.